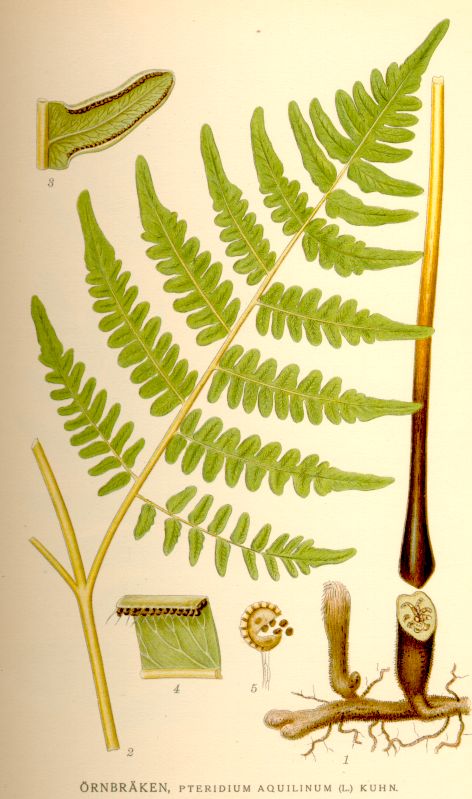 Brackens ("Pteridium") are a genus of about ten species of large, coarse s, in the family . The genus has probably the widest distribution of any fern genus in the world, being found on all continents except and in all environments except for hot and cold deserts. Therefore it is considered to have a . In the past, the genus was commonly treated as having only one species, "Pteridium aquilinum", but the recent trend is to subdivide it into several species.

It can also have a major impact on remains, by disturbing ordestroying below-ground archaeological interest. It also obscures archaeological sites which could lead to their inadvertent damage.

The word bracken is of origin, related to the Swedish word "bräken", meaning fern.

arily, bracken may be considered to be one of the most successful ferns. It is also one of the oldest, with fossil records of over 55 million years old having been found. The plant sends up large, triangular fronds from a wide-creeping underground rootstock, and may form dense thickets. This rootstock may travel a metre or more underground between fronds. The fronds may grow up to 2.5 m (8 ft) long or longer with support, but typically are in the range of 0.6-2 m (2-6 feet) high. In cold environments bracken is winter-, and, as it requires well-drained , is generally found growing on the sides of hills.

It is a , deciduous in winter. The s are produced singly from an underground , and grow to 1-3 m tall; the main stem is up to 1 cm diameter at the base. The rhizomes typically grow to a depth of 50cm, although in some soils this may extend to more than a metre.

The spores used in reproduction are produced on the underneath of the leaf in structures found on the edges of the leaf called . The linear pattern of these is different to other ferns which are circular and towards the centre.

"Pteridium aquilinum" (Bracken or Common Bracken) is the most common species with a , occurring in temperate and subtropical regions throughout much of the world, including most of , , and in the , and , and northern in the . It is a prolific and abundant plant in the highlands of . It is limited to altitudes of below 600 metres in the UK, does not like extreme cold temperatures, poorly drained or . It causes such a problem of invading pastureland that at one time the British government had an eradication program. Special filters have even been used on some British water supplies to filter out the bracken s.fact|date=March 2008. [http://www.searchnbn.net/gridMap/gridMap.jsp?allDs=1&srchSpKey=NBNSYS0000002031 NBN distribution map for the United Kingdom]

It has been observered growing in soils from pH 2.8 to 8.6. Exposure to cold or high inhibits its growth.

Woodland can be found growing under the bracken canopy, for example " epipterygia". "Camarographium stephensii" is host specific to the dead stems.

: Bracken fern is known to produce and release allelopathic chemicals, which is an important factor in its ability to dominate other vegetation, particularly in regrowth after fire. Herb and tree seedling growth may be inhibited even after bracken fern is removed, apparently because active plant toxins remain in the soil.

Brackens substitute the characteristics of a woodland canopy, and are important for giving shade to european plants such as and wood anemone, where the woodland does not exist. These plants are intolerant to stock trampling. Dead bracken provides a warm microclimate for development of the immature stages. Climbing corydalis,wild gladiolus and also seem to benefit from the conditions found under bracken stands.

Animal species that use Bracken

Brackens of the northern hemisphere are used as food plants by the e of some species including , , , Gold Swift, Map-winged Swift, , , , . They also form an important ecological partnership with plants such as violet and ("") for various Fritillary species.

It is also a favoured haunt of the sheep tick "" which can carry .

Between 27 to 40 invertebrates (including nine moths) in the UK feed on bracken. These include the , a ("Dytroptis pteridis"), the moth caterpillar, brown silver-line moth caterpillar ("") and " cytisella". The numbers feeding on the bracken increase as the season progresses due to the decreasing levels of toxin, and the production of nectaries in the spring, food for ants which in turn may kill any insects in the vicinity.

The European adder can be found basking on bracken, the colour of their skin concealing them.

Bracken s (the immature, tightly curled emerging fronds) have been considered edible by many cultures throughout history, and are still commonly used today as a foodstuff. Bracken fiddleheads are either consumed fresh (and cooked) or preserved by salting, pickling, or sun drying. In Korea, where they are called "gosari namul" (고사리 나물), they are a typical ingredient in the mixed rice dish called "".

Both s and s have been used to brew , and the rhizome has been used as a substitute for . Bread can be made out of dried and powered rhizomes alone or with other . American Indians cooked the rhizomes, then peeled and ate them or pounded the starchy fiber into flour. In , starch from the rhizomes is used to make confections.

Bracken is called "wiwnunmí útpas" ‘huckleberry’s blanket’ by the Umatilla Indians of the Columbia River in the United States Northwest. The fronds were used to cover a basket full of huckleberries in order to keep them fresh.

The of used the rhizomes of "P. esculentum" ("aruhe") as a staple food, especially for exploring or hunting groups away from permanent settlements; much of the widespread distribution of this species in present-day New Zealand is in fact a consequence of prehistoric deforestation and subsequent tending of "aruhe" stands on rich soils (which produced the best rhizomes). The rhizomes were air-dried so that they could be stored and became lighter; for consumption, they were briefly heated and then softened with a "patu aruhe" (rhizome pounder); the starch could then be sucked from the fibers by each diner, or collected if it were to be prepared for a larger feast. "Patu aruhe" were significant items and several distinct styles were developed (McGlone "et al." 2005).

Bracken has also been used as a form of al remedy. Powdered rhizome has been considered particularly effective against parasitic worms. American Indians ate raw rhizomes as a remedy for .

In East Asia, "Pteridium aquilinum" (fernbrake or bracken s) is eaten as a vegetable, called "warabi" (蕨 / わらび) in Japan, "gosari" (고사리) in Korea, and "juécài" (蕨菜) in China and Taiwan. In Korea, a typical "" (small side dish) is "gosari-namul" (고사리나물) that consists of prepared fernbrake that has been sauteed. It is a component of the popular dish "".

Bracken has been shown to be ic in some animals and is thought to be an important cause of the high incidence of in Japan. It is currently under investigation as a possible source of new s.

Uncooked bracken contains the , which breaks down . Eating excessive quantities of bracken can cause , especially in creatures with simple stomachs. s are less vulnerable because they synthesize thiamine.

It was traditionally used for animal bedding, which later broke down to a rich mulch which could be used as fertiliser.

Other uses were as packing material for products such as earthenware, as a fuel, as a form of thatch. The ash was used for degreasing woolen cloth.

The ash of bracken fern was used in making "forest glass" in Central Europe from about 1000 to 1700.

The plant is to animals such as mice, rats and cattle when ingested, although they will usually avoid it unless nothing else is available. Young stems are used as a in , leading some researchers to suggest a link between consumption and higher rates. [ [http://www.pubmedcentral.gov/articlerender.fcgi?artid=1177200 The possible human hazard of the naturally occurring bracken carcinogen] ] The s have also been implicated as a carcinogen. Danish scientist Lars Holm Rasmussen released a study in 2004 showing that the carcinogenic compound in bracken, or PTQ, can leach from the plant into the water supply, which may explain an increase in the incidence of gastric and oesophageal cancers in bracken-rich areas. [ [http://www.guardian.co.uk/life/feature/story/0,,1299844,00.html Guardian newspaper article on ptaquiloside from bracken entering water supplies] ]

In cattle, bracken poisoning can occur in both an acute and chronic form, acute poisoning being the most common. In pigs and horses bracken poisoning induces vitamin B deficiency [Auld, RA & RW Medd, "Weeds", Inkata Press, Sydney, 1992] . Poisoning usually occurs when there is a shortage of available grasses such as in or falls.

It damages blood cells and destroys (Vitamin B1). This in turn causes , a disease linked to nutritional deficiency.

Various techniques are recommended by to control bracken either individually or in combination:

* - once or twice a year, for at least 3 years
* - using heavy rollers, again for at least 3 years
* treading - during winter, encouraging livestock to bracken areas with food. They trample the developing plants and allow frost to penetrate the . Livestock should be removed in the spring to prevent them being poisoned.
* - useful for removing the litter, but may be counter-productive as bracken is considered to be a fire adapted species
* - late in the season followed by sowing seed
* - is selective for ferns, and is not but has the advantage that the effects can be seen soon after application. They are applied when the fronds are fully unfurled to ensure that the chemical is fully absorbed. recommends that only can be sprayed aerially, Glyphosate requires spot-treatment e.g. using a weedwiper or knapsack spray.
* Allowing plants to grow in its place, e.g., the establishment of woodland, causes shade that inhibits bracken growth