Cyperaceae
This article is about plants in the family Cyperaceae. For other uses of "sedge", see Sedge (disambiguation).

Cyperaceae are a family of monocotyledonous graminoid flowering plants known as sedges, which superficially resemble grasses or rushes. The family is large, with some 5,500 species described in about 109 genera.[1] These species are widely distributed, with the centers of diversity for the group occurring in tropical Asia and tropical South America. While sedges may be found growing in all kinds of situations, many are associated with wetlands, or with poor soils. Ecological communities dominated by sedges are known as sedgelands. 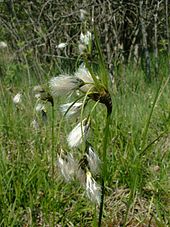