The Orbiting Carbon Observatory (OCO) is a NASA satellite mission intended to provide global space-based observations of atmospheric carbon dioxide (CO2). The original spacecraft was lost in a launch failure on February 24, 2009, when the payload fairing of the Taurus rocket which was carrying it failed to separate during ascent.[1] The added mass of the fairing prevented the satellite from reaching orbit.[2] It subsequently re-entered the atmosphere and crashed into the Indian Ocean near Antarctica.[3][4] The FY 2010 NASA budget request includes US$170 million for NASA to develop and fly a replacement for the Orbiting Carbon Observatory.[5]

OCO's measurements would have been accurate enough to show for the first time the geographic distribution of carbon dioxide sources and sinks on a regional scale.[6] The data would have improved the understanding of the global carbon cycle, the natural processes and human activities that influence the abundance and distribution of the greenhouse gas. This improved understanding was expected to enable more reliable forecasts of future changes in the abundance and distribution of carbon dioxide in the atmosphere and the effect that these changes may have on Earth's climate.

The OCO spacecraft was provided by Orbital Sciences Corporation.[7] It was launched from Vandenberg Air Force Base in California on a dedicated Taurus XL rocket. However, the payload fairing — a clam shell-shaped covering that protects the satellite during launch — apparently failed to separate from the spacecraft. "We have not had a successful launch tonight and will not be able to have a successful OCO mission," NASA commentator George Diller said.[8]

During its two-year mission, OCO would have flown in a near polar orbit which would have enabled the instrument to observe most of Earth's surface at least once every sixteen days. It would have flown in loose formation with a series of other Earth-orbiting satellites known as the Earth Observing System Afternoon Constellation, or the A-train. This coordinated flight formation was intended to enable researchers to correlate OCO data with data acquired by other instruments on other spacecraft. In particular, Earth scientists could have compared OCO data with nearly simultaneous measurements acquired by the Atmospheric Infrared Sounder (AIRS) instrument, flying on NASA’s Aqua satellite.

The cost of the mission was US$280 million.[9] It was sponsored by NASA's Earth System Science Pathfinder Program.[10] NASA’s Jet Propulsion Laboratory in Pasadena, California, manages OCO for NASA's Science Mission Directorate.

The satellite carried a single instrument that would have taken the most precise measurements of atmospheric carbon dioxide ever made from space. The instrument consisted of three parallel, high-resolution spectrometers, integrated into a common structure and fed by a common telescope. The spectrometers would have made simultaneous measurements of the carbon dioxide and molecular oxygen absorption of sunlight reflected off the same location on Earth’s surface when viewed in the near-infrared part of the electromagnetic spectrum, invisible to the human eye.

As sunlight passes through Earth’s atmosphere and is reflected from Earth’s surface, molecules of atmospheric gases absorb very specific colors of light. If the light is divided into a rainbow of colors, called a spectrum, the specific colors absorbed by each gas appear as dark lines. Different gases absorb different colors, so the pattern of absorption lines provides a telltale spectral “fingerprint” for that molecule. OCO’s spectrometers were designed to detect these molecular fingerprints.

Each of the three spectrometers was tuned to measure the absorption in a specific range of colors. Each of these ranges includes dozens of dark absorption lines produced by either carbon dioxide or molecular oxygen. The amount of light absorbed in each spectral line increases with the number of molecules along the optical path. OCO's spectrometers would have measured the fraction of the light absorbed in each of these lines with very high precision. This information was then to be analyzed to determine the number of molecules along the path between the top of the atmosphere and the surface.

If the amount of carbon dioxide varies from place to place, the amount of absorption will also vary. To resolve these variations, the observatory’s instrument was to record an image of the spectrum produced by each spectrometer three times every second as the satellite flies over the surface at more than four miles per second. This information would then have been transmitted to the ground, where carbon dioxide concentrations would have been retrieved in four separate footprints for each image collected. These spatially varying carbon dioxide concentration estimates would then have been analyzed using global transport models, like those used for weather prediction, to infer the locations of carbon dioxide sources and sinks.[11]

The OCO instrument was developed by Hamilton Sundstrand Sensor Systems in Pomona, California, and the Jet Propulsion Laboratory.[12] 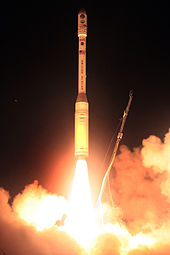 The OCO launch failed because the Taurus-XL launcher payload fairing failed to separate. A payload fairing is a clamshell-shaped cover that encloses and protects a payload on the pad and during early flight. Fairings are a standard component of expendable launch vehicles, and they are always jettisoned as soon as possible after a rocket has climbed high enough for heating from air friction to no longer risk damaging the payload. On this flight, the fairing should have been jettisoned several seconds after Stage 2 ignition. The extra mass of the fairing was not a significant factor during the flight of the larger lower stages, but it kept the relatively small Stage 3 from adding enough velocity to reach orbit, so the resulting sub-orbital ballistic path took the payload into the ocean near Antarctica, 17 minutes after liftoff.[14]

The Orbital Taurus program manager John Brunschwyler said, "We could not make orbit. ... Initial indications are the vehicle did not have enough [force] to reach orbit and landed just short of Antarctica in the ocean. ... Certainly for the science community, it's a huge disappointment."[14]

On July 17, 2009 NASA released a summary of its Mishap Investigation Board report.[15] In the report the board provided recommendations to prevent any future problems associated with the four hardware components that could have caused the failure.

Three days after the failed February 2009 launch, the OCO science team sent NASA headquarters a proposal to build and launch an OCO "carbon copy", which planned to have the replacement satellite launched by late 2011.[16] On February 1, 2010, the FY 2010 NASA budget request did include US$170 million for NASA to develop and fly a replacement for the Orbiting Carbon Observatory.[5]