Deluge (history)
For use of the term "Deluge" outside the field of European history, see Deluge (disambiguation).

The term Deluge (Polish: Potop, Lithuanian: Tvanas) denotes a series of mid-17th century campaigns in the Polish–Lithuanian Commonwealth. In a wider sense it applies to the period between the Khmelnytsky (Chmielnicki) Uprising of 1648 and the Truce of Andrusovo in 1667, thus comprising the Polish–Lithuanian theaters of the Russo-Polish and Second Northern Wars.[4] In a stricter sense, the term refers to the Swedish invasion and occupation of the Commonwealth as a theater of the Second Northern War only (1655–1660); In Poland and Lithuania this period is called the Swedish Deluge (Lithuanian: Švedų tvanas, Polish: Potop szwedzki).[5]

During the wars the Commonwealth lost an estimated one-third of its population as well as its status as a great power.[6]

In 1648, the Ruthenian feudal lord Bohdan Khmelnytsky (known in Polish as "Bohdan Chmielnicki") led a popular uprising of Dnieper Cossacks and Ukrainian peasants discontented with the rule of Polish and Lithuanian magnates.

Although the initial phase of the rebellion ended (after much destruction) at the Battle of Berestechko (1651), it brought into focus the rivalry between Russia and the Commonwealth for hegemony over the Ukraine area and over the eastern Slavic lands in general. Thus in October 1653 the Russian Zemsky Sobor declared war on the Commonwealth and in June 1654 the forces of Tsar Alexis of Russia invaded the eastern half of Poland-Lithuania, starting the Russo-Polish War of 1654-1667. The Swedish Empire, which technically already was in War with the Commonwealth (a cease fire agreement existed from 1629 that was prolonged 1635 to 1661), invaded (July 1655) and occupied the remaining half of the country.

Two Polish–Lithuanian noble princes, Janusz Radziwiłł and Bogusław Radziwiłł, subsequently introduced internal disaffection and dissension into the Commonwealth's troubles and began negotiations with the Swedish king Charles X Gustav of Sweden aimed at breaking up the Commonwealth and the Polish–Lithuanian union. They signed the treaties of Kėdainiai (1655), which envisaged the Radziwiłł princes ruling over two Duchies carved out from the lands of the Grand Duchy of Lithuania under Swedish vassalage (the Union of Kėdainiai).

The Polish–Lithuanian King John II Casimir (reigned 1648–1668) lacked support amongst the Commonwealth nobility (szlachta) due to his sympathies with absolutist Austria and his open contempt for the "Sarmatist" culture of the nobility. Earlier, in 1643, John Casimir had become a member of the Jesuits and had received the title of Cardinal. Nevertheless, in December 1646 John Casimir had returned to Poland and, in October 1647, resigned his position as Cardinal to stand for election for the Polish throne. He became King in 1648. However, some of the nobility regarded Charles Gustav (King of Sweden from 1654 to 1660 and John Casimir's cousin) as the legitimate heir to the Polish–Lithuanian throne. Many members of the Polish nobility (szlachta), including Deputy Chancellor of the Crown Hieronim Radziejowski and Grand Treasurer of the Crown Bogusław Leszczyński, regarded John II Casimir of Poland as a weak king or as a "Jesuit-King"; for this or for personal reasons (i.e. Leszczyński was Protestant and Radziejowski was an old enemy of the Polish King who had banished him from Poland to exile in Sweden), they encouraged Charles Gustav to claim the Polish crown.

When the Swedish armies first invaded Poland-Lithuania, the Voivod of Poznań, Krzysztof Opaliński, surrendered Great Poland to Charles Gustav. Other areas also surrendered in rapid succession. Almost the whole country followed suit, with the Swedes entering Warsaw unopposed in August 1655 and John Casimir fleeing to Silesia. However several places still resisted, most remarkably (and symbolically) the monastery at Jasna Góra. Led by The Grand Prior Augustyn Kordecki, the garrison of this sanctuary-fortress of Poland held off its enemies in the Siege of Jasna Góra (November 1655 to January 1656). The defense of Jasna Góra galvanized Polish resistance against the Swedes. In December 1655 the Tyszowce Confederation formed in support of the exiled John Casimir.

Spontaneous uprisings started all over the country, attacking the dispersed occupation forces — who, in their turn, retaliated. The uprisings soon merged under the leadership of Polish military leader Stefan Czarniecki and Grand Hetman of Lithuania Paweł Jan Sapieha, who started organized counterattacks in order to eliminate those loyal to Charles Gustav. In the end, John II Casimir's supporters crowned him in Lwów Cathedral in 1656 (Lwów Oath). The Commonwealth forces finally drove back the Swedes in 1657.

Oath of King John Casimir of Poland, taken in 1655 in Lwów, during the Deluge

The Commonwealth also defeated forces from Transylvania and Brandenburg-Prussia, but the Duchy of Prussia gained formal Polish recognition of its independence outside of the Polish state (Treaty of Wehlau, 1657).

With the Treaty of Hadiach on September 16, 1658, the Polish Crown elevated the Cossacks and Ruthenians to a position equal to that of Poland and Lithuania in the Polish–Lithuanian Union, and in fact transformed the Polish–Lithuanian Commonwealth into a Polish–Lithuanian–Ruthenian Commonwealth (Polish: Rzeczpospolita Trojga Narodów, "Commonwealth of Three Nations"). Supported by Cossack Hetman Ivan Vyhovsky and the starshyna, the treaty aimed[citation needed] to change the face of Eastern Europe. However, the terms of the treaty never came into full operation: Russia refused to recognize Hadiach, and maintained its claims to Ukraine.

The War for Ukraine (1654–1667) ended with the Treaty of Andrusovo of 13 January 1667. (Poland-Lithuania profited from Turkish participation in the Russo-Turkish War (1676–1681) due to Ottoman links with the Crimea.) The peace settlement gave Moscow control over the so called Left-bank Ukraine (left of the river Dnieper), with the Commonwealth retaining Right-bank Ukraine (right of the Dnieper). While initially the agreement stipulated that Russia would return Left-bank Ukraine to the Commonwealth in twenty years, the division became permanent with the Eternal Peace Treaty of 1686. 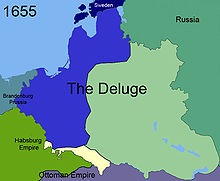 Poland-Lithuania during the Deluge

The Deluge brought to an end the era of Polish religious tolerance: mostly non-Catholic invaders antagonized the mostly Catholic Poles. The expulsion of the Protestant Polish Brethren from Poland in 1658 exemplified the increasing intolerance. During the Deluge, many thousands of Polish Jews also fell victim to violence - violence often initiated by the Zaporozhian Cossacks.[7] 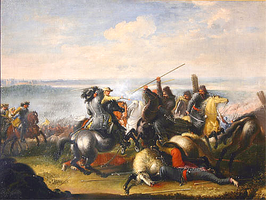 Swedish king Charles X Gustav in the Battle of Warsaw (1656)

Henryk Sienkiewicz describes the Deluge in his novel Potop (1886).

James Michener describes the Deluge in his novel Poland (1983).

Jerzy Hoffman directed the film The Deluge (Potop) in 1974, a classic historical work based on Sienkiewicz's novel. It starred Daniel Olbrychski as the character Andrzej Kmicic, a patriot who valiantly fought against the Swedish invasion. The film received a nomination for an Oscar in 1974, but lost to the Italian film Amarcord.