A native of Coupar Angus in Scotland, Sutherland got his start in football by playing end at the University of Pittsburgh, commonly known as Pitt, under legendary coach Glen S. "Pop" Warner. Sutherland was named an All-American and played on Pitt's National Championship teams in 1915 and 1916.

Sutherland also played on Pitt's undefeated 1917 team. The 1917 team was known as "The Fighting Dentists" because on occasion every position was filled by dental students.[2] The dental students on the 1917 team included Sutherland,[3] Katy Easterday,[4] Skip Gougler,[5] "Tank" McLaren[6] and "Jake" Stahl.[7] Sutherland graduated from the University of Pittsburgh's School of Dentistry, where he also held a professorship in the instruction of bridge and crown.[3]

In 1919, Sutherland played in a few games with the Massillon Tigers of the Ohio League, which was the direct predecessor to the modern National Football League. However he soon left the team and began his head coaching career at Lafayette College from 1919 to 1923, leading the Leopards to the 1921 Eastern Collegiate Championship.[8] 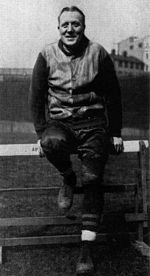 In 1924, Sutherland replaced "Pop" Warner, his former coach and mentor, as head coach at Pitt. Sutherland, who was described as "a national hero" in a Saturday Evening Post article,[9] became a highly admired and influential coach at the University while compiling a record of 111–20–12. On offense, he ran a double-wing formation known as the "Sutherland Scythe".[10] He was known for his calm and direct demeanor, never shouting or ranting to motivate his team.[11]

After years of struggling with the University for sustained financial support, Sutherland resigned in 1938 because the school's Chancellor, John Gabbert Bowman, instituted a policy of de-emphasis for the football program, eliminating athletic scholarships, student athlete stipends, and the recruiting funds. Bowman's moves, which resulted in Sutherland's departure, were controversial among students and supporters of the football program.[16]

As of 2009, his career coaching record of 144–28–14 in 20 seasons at the collegiate level, an .812 winning percentage, is the 25th best winning percentage in all divisions of college football[17] and 11th best among coaches from the top division,[18] currently known as the Division I FBS. His .812 winning percentage is also the 5th best such mark during the first 20 years of any coaches' career.[19] He is also tied for the 23rd fewest games to reach 100 victories, accomplished in his 132nd game as coach.[20]

Sutherland later coached in the National Football League with the Brooklyn Dodgers for two seasons, 1940–41, before leaving the team to serve the United States during World War II.

During the war, Sutherland served in the United States Navy and achieved the rank of Lieutenant commander.[21]

Upon returning to the United States, Sutherland landed with the Pittsburgh Steelers, where he was head coach and team vice president.[21] He led the Steelers to their first playoff appearance in 1947.

While on a scouting trip for the Steelers in April 1948, Sutherland was found in his car in Bandana, Kentucky, where he was experiencing confusion and was then taken to a hospital in Cairo, Illinois, where he was initially diagnosed with "nervous exhaustion".[21][22] He was flown back to Pittsburgh for further treatment. An exploratory surgery was required to determine whether he was suffering from a hemorrhage or a tumor.[21] Sutherland died in Pittsburgh on April 11, 1948, following surgery to remove a malignant brain tumor.[23] He is interred in Pittsburgh's Homewood Cemetery. 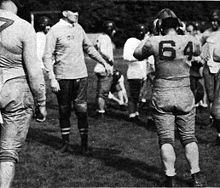 Sutherland running a practice at Pitt in 1935

Sutherland was inducted into the College Football Hall of Fame in 1951 as both a player and a coach.

He is memorialized on the Pitt campus with a street, Sutherland Drive, and the student residence Sutherland Hall.

*The Pittsburgh Panthers claim a share of the 1934 National Championship per a 1970 Sports Illustrated study on national championships that the school has used since its publication as the basis of its claims.[25] However, this championship is not included in the Official NCAA Records Book's list of national champions.