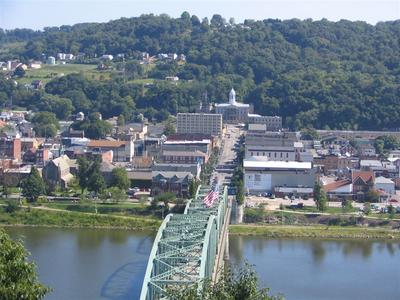 Kittanning (pronEng|kɪˈtæniŋ) is a and the of Armstrong County, , USA. It is sited 44 miles (71 km) northeast of Pittsburgh along the east bank of the . The name means "at the great stream" in the Delaware (Native American) language.

The borough is located on the east bank of the , founded on the site of the 18th century Native American village of Kittanning at the western end of the . In 1756 the village was destroyed by at the Battle of Kittanning during the . During the attack, a blast from the explosion of gunpowder stored in 's house was heard in Pittsburgh, 44 miles away.

The playground on North Jefferson Street was formerly the Kittanning Cemetery; 274 graves were moved in 1960 to a new cemetery on Troy Hill Road.

The original bridge over the was torn down, and in its place the new was built higher to avoid flooding. The town and the bridge were the focus of the 2002 movie, "The Mothman Prophecies" starring and , which was filmed in the area.

There were 2,032 households out of which 26.2% had children under the age of 18 living with them, 36.7% were married couples living together, 14.9% had a female householder with no husband present, and 45.0% were non-families. 40.5% of all households were made up of individuals and 19.4% had someone living alone who was 65 years of age or older. The average household size was 2.19 and the average family size was 2.96.

* The Leader Times (the only daily newspaper in Armstrong County)
* AM 1380
* [http://www.familylifetv.com/ FLTV]