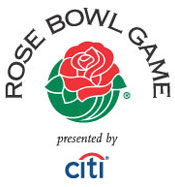 (1942)The Rose Bowl Game is an annual American , usually played on () at the in . When New Year's Day falls on a Sunday, the game is then played on the following Monday. Nicknamed "The Granddaddy of Them All", the Rose Bowl is the oldest . It was first played in 1902, and continuously since 1916. Since 1945, it has been the highest attended college football bowl game. [NCAA Division 1 football records book. NCAA, 2007 Edition, pages 296-302 Major Bowl Game Attendance] It is part of the "America's New Year Celebration", with the Rose Parade held in the morning.

Originally titled the "Tournament East-West football game," the first Rose Bowl was first played on , , starting the tradition of New Year's Day bowl games. The inaugural game featured 's dominating 1901 Michigan team, representing the East, who crushed a previously 3-1-2 team from , representing the West, by a score of 49-0 after Stanford quit in the third quarter. Michigan finished the season 11-0-0 and was considered the national champion. Yost had been Stanford's coach the previous year. The game was so lopsided that for the next 15 years, the Tournament of Roses officials ran chariot races, ostrich races, and other various events instead of football.

Before the was built for the , match, games were played in Pasadena's , approximately three miles southeast of the current Rose Bowl stadium near the campus of . Tournament Park was determined to be unsuitable for the larger and larger crowds gathering to watch the game and a new, permanent home for the game was commissioned.

The Rose Bowl stadium, designed after the in New Haven, then hosted the first "Rose Bowl" game in 1923. The name of the stadium was alternatively "Tournament of Roses Stadium" or "Tournament of Roses Bowl", until being settled as "Rose Bowl" before the 1923 Rose Bowl game. [HUGE FLAGSTAFF FOR PASADENA. Enormous Steel Pole 122 and ½ Feet Long Will Stand in Rose Bowl. Los Angeles Times, December 10, 1922. MONDAY afternoon at 2 o'clock the new flagstaff of the Tournament of Roses stadium, now called the Rose Bowl, will be put in place with suitable ceremony under auspices of the Pasadena Lions Club, donor of the pole.]

The stadium seating has been reconfigured several times since its original construction in 1922. For many years, the Rose Bowl stadium had the largest football stadium capacity in the United States, eventually being surpassed by in 1998. [ [http://bentley.umich.edu/athdept/stadium/ The Michigan Stadium Story] ] [ [http://www.mgoblue.com/facilities/article.aspx?id=28642 University of Michigan Official Athletics site] – Michigan Stadium] The maximum stated seating capacity was 104,594 from 1972 to 1997. Capacity was lowered following the . The game, which was also the BCS championship game, had a crowd of 93,986. [ [http://www.tournamentofroses.com/roseparade/paradefaqs.asp Tournament of Roses Parade FAQs] . In 2006, attendance was 93,986.] As of 2008, the Rose Bowl is still number eleven on the , and is still the largest stadium that hosts post-season bowl games. The Rose Bowl is also the only BCS bowl game that is held in a non-NFL stadium.

In the game's early years, except during , the Rose Bowl always pitted a team, but not necessarily the conference champion, from the (PCC), the predecessor of the current , against an opponent from the Eastern U.S. During the last two years of World War I, Military base teams met in the Rose Bowl. A number of notable matchups were made with the top football teams and top coaches of the time. These included the featuring Knute Rockne's Notre Dame team against Pop Warner's Stanford team, The 1926 featuring Alabama Crimson Tide's win over Washington State(the first southeastern team to beat a northern team, and the , featuring Howard Jones' USC Trojans against Bob Neyland's Tennessee Volunteers. There were 10 games matching two undefeated teams during this time.

With the United States' entry into , on December 7, 1941, there was concern about an ese attack on the West Coast. Much discussion focused on the possibility of an attack where any crowds might gather. The Rose parade with a million watchers, and the Rose Bowl with 90,000 spectators were presumed to be ideal targets for the Japanese. Lieutenant General recommended that the Rose Parade and Rose Bowl festivities be canceled. [ "ROSE BOWL GAME CALLED OFF", "San Antonio Light", December 14, 1941, pB-1 ] [Forbidding Crowds. Los Angeles Times, December 16, 1941] [Zimmerman, Paul - Duke Likely to Play Beavers in Durham. Blue Devils Invite Foes Rose Bowl, Shrine Grid Games Halted as Other Sports Events in Balance. Los Angeles Times, December 15, 1941.] The Rose Bowl committee originally planned to cancel the game. On December 16, 1941, Duke University invited the game and Oregon State to Duke's home stadium in .

During , many college football schools had dropped some conference opponents and instead played football against local military base teams. Many colleges could not even field teams due to the draft and manpower requirements. [ [http://www.time.com/time/magazine/article/0,9171,850785,00.html R.I.P.] Time Magazine, December 6, 1943] After the war was over, demobilization and the enabled returning servicemen to attend college. The 1946 season was the first true post-war college football season with travel restrictions lifted and civilian college opponents returning to schedules.

The Big Nine and PCC were of the same accord when it came to treating players as amateurs, as compared to the semi-professional status that the Southern Universities proposed. Also, the Big Nine and PCC both had the same attitudes towards desegregation and allowing African-Americans to play football. [Michael Oriard - King Football: Sport and Spectacle in the Golden Age of Radio & Newsreels, Movies & Magazines, The Weekly & The Daily Press. Published 2004 UNC Press. ISBN 0807855456 Chapter 3:Who cares about reform?] Many other universities were still segregated. None of the schools had an African American athlete until 1966. The Cotton Bowl, Orange Bowl, and Sugar Bowl would not be integrated until 1948, 1955, and 1956 respectively. [football, gridiron. (2008). In Encyclopædia Britannica. Retrieved January 28, 2008, from Encyclopædia Britannica Online: [http://www.britannica.com/eb/article-234274 www.britannica.com/eb/article-234274] . Football in the United States - The racial transformation of American football. ]

The Big Nine agreed, after eight years of negotiating over payments, rules, and ticket allocations to a five-year exclusive deal with the Rose Bowl to send the conference champion to meet the PCC conference champion. [Big Ten Football media guide (2007 Edition) page 5] UCLA, USC, Minnesota and Illinois all voted against it. [ROSE BOWL HISTORY BIG TEN TAMED THE WEST FROM 1947-59. (Seattle, WA), December 30, 1997] Beginning with the game, the game's participants were established as the champions of what is now the and the PCC.

When the PCC dissolved in 1959 following a pay-for-play scandal, there was no official agreement in force. The Tournament of Roses invited the ex PCC champion to play the Big Ten champion to the 1960 Rose Bowl. The Big Ten authorized its members to accept any Rose Bowl invitation at their discretion. The signed an agreement with the Rose Bowl that remained in force from the 1961 Rose Bowl onwards. Ohio State exercised this discretion and held the Buckeyes from the 1962 Rose Bowl. The Big Ten later again signed an agreement with the Rose Bowl. The AAWU later became known as the Pacific 8, and eventually the Pacific 10 conference.

Both conferences had a "no repeat" rule in force for a number of years. Under this rule, any team that had appeared in the Rose Bowl game the previous season could not go again, even if they were the conference champion. The Big Ten abolished this rule in 1972.

Since 1998, with the creation of the , team selection for the Rose Bowl is now tied to the other three BCS bowls, although in any given year the Rose Bowl still attempts, if possible, to maintain the traditional Pac-10 versus Big Ten format. Twice in this era, the Rose Bowl has served as the BCS championship game.

The 2006 Rose Bowl game featured offensive powerhouses Texas, riding a 19-game winning streak, and USC, which entered the game with a 34-game winning streak and 2 Heisman Trophy winners. Texas won 41-38. The game's television viewership was the highest for college football contest since the 1987 between Penn State and Miami.

On two other occasions during the BCS era, Rose Bowl participation has expanded beyond the Big Ten and Pac-10. The 2003 game featured the first appearance by Oklahoma. The 2005 game featured Texas of the , selected, amid some controversy, over California of the Pac-10.

The 2004 game is also noteworthy. In this game, USC defeated Michigan, 28-14, thus earning the top ranking in the and a share of the national championship with BCS champion LSU (USC, despite being #1 in both the Coaches' and AP polls, did not qualify for the BCS championship game because of their standing in the BCS system).

USC has played the most times in the Rose Bowl, with 32 appearances, followed by Michigan (20), Washington (14), and Ohio State (13). Alabama, 4-1-1 in Rose Bowls, has made the most appearances of any team outside the Pac-10 and Big Ten conferences, and even references the game in its fight song.

From the 1946 season (), when the Big Ten-Rose Bowl agreement began, through the 1971 season (), the Big Ten did not allow its teams to appear in the Rose Bowl in consecutive years. There was one exception: Minnesota played in the and games. (Several unusual circumstances occurred in the 1961 season: the Big Ten-Rose Bowl contract had been allowed to lapse, Big Ten champion Ohio State was invited anyway, and the Ohio State faculty turned down the bid.)

Also of note, during this era Big Ten and Pac-8 teams could play only in the Rose Bowl; this restriction was not lifted until the 1975 season.

of is the only player to ever start in four Rose Bowl games. Legendary coach led Ohio State to the Rose Bowl from 1973-1976.

The only current member of the Pac-10 or the Big Ten to have never appeared in the Rose Bowl is the .

The BCS era now covers the past nine seasons, starting with 1998 (). Of the four games featuring the traditional Big Ten-Pac-10 matchup, the series is tied 2-2. The and did not feature the Big Ten champion, since Ohio State played in each seasons' and USC, the Pac-10 champion, did not play in the but instead played in the 2005 BCS National Championship game, the .