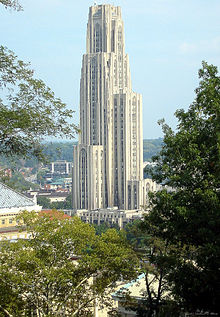 The upper campus provides dramatic views of the lower campus, including the Cathedral of Learning, seen here from a location near Pennsylvania Hall

Among the newest residence facilities at the University of Pittsburgh, these building reside on the upper campus located near many of the school's athletic facilities. The upper campus resides approximately 200 feet (61 m) above the lower campus that lies along Forbes and Fifth Avenues, providing dramatic views along the hilltop and slopes.[1] Planning for upper campus student housing originated in the late 1960s and early 1970s, but stalled due to community and political opposition until the early 1990s with opening of Sutherland Hall, the first major student residence constructed by Pitt in 29 years.[2][3] 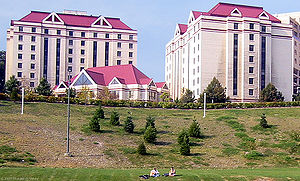 View of Sutherland Hall at the University of Pittsburgh from the Petersen Events Center prior to the construction of Panther Hall.

Sutherland Hall is a residence hall of the University of Pittsburgh and is located on the upper campus next to the major athletic facilities and the Petersen Events Center. The $24 million[4] ($32.9 million in 2011 dollars[5]) structure opened in 1992.[6] It is named for famed Pitt football coach Jock Sutherland.

Sutherland Hall, providing a view of the entire University, houses 739 first-year students. It comprises a ten-floor West wing and an eight-floor East wing, adjoined by a commons building. The air-conditioned rooms are mostly doubles with semi-private baths, and larger suites. There is a TV lounge or study room on each floor.

The East and West wings of Sutherland Hall share a commons area complete with The Perch, a small dining hall, Hill o' Beans coffee cart, a computer center, and a student mail center. There is a fitness center, laundry facility, and meeting room on the ground floor of each wing.[1] 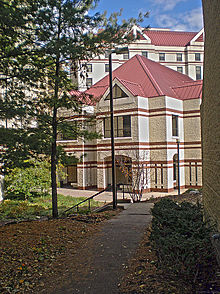 Pennsylvania Hall, a residence hall at the University of Pittsburgh.

Pennsylvania Hall, opened in 2004, is one of the newest residence halls at the University of Pittsburgh. Designed by Perkins Eastman Architects, its construction cost $22.1 million.[9] It is located on the upper campus adjacent to the Petersen Events Center, having nine floors and housing 420 men and women, primarily upperclass students, in air-conditioned four-person suites and doubles with private baths. An open lounge and laundry facilities are on every floor, and the commons area contains The Pennsylvania Perk coffee cart, a fitness center, a meeting room, and a student mail center.

Pennsylvania Hall sits on the site of the former medical school building, also called Pennsylvania Hall, constructed in 1910 (dedicated in January 1911) and demolished in late November 1998.[11][12] It was one of only four buildings of the school's original acropolis campus plan to be constructed.[13] 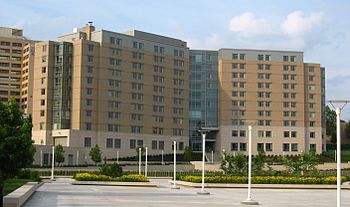 Panther Hall at the University of Pittsburgh.

Panther Hall, opened in 2006, is one of the newest residence halls at the University of Pittsburgh. Designed by Perkins Eastman Architects, its construction cost $33.2 million.[14] It is located on the upper campus adjacent to the Petersen Events Center and just west of Pennsylvania Hall, it is ten-floors and houses 511 men and women, primarily upperclass students, in air-conditioned rooms that are a combination of three- and five-person suites, and doubles with private baths.

An open lounge, study area, and laundry facilities are on every floor, and the commons area contains Thirst & 10 coffee cart, a fitness center, a meeting room, and a student mail center.

One of the on-campus fraternity housing complex units. 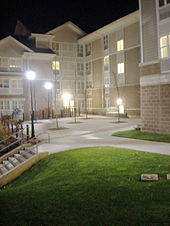 The Darragh Street Apartments are an on-campus apartment complex consisting of four four-story buildings that provide preferred housing for Pitt's medical students adjacent to the medical school's Scaife Hall, Salk Hall, and the main hospitals of the University of Pittsburgh Medical Center. Designed by Renaissance 3 Architects,[16] the housing complex totals 99,400 square feet (9,230 m2) and contains 184 beds in one- and two-bedroom garden-style apartments. The complex was completed September 2007 for $18.2 million. The construction of the medical student housing on Darragh Street allowed the University to renovate Ruskin Hall, the former medical school residential complex, for undergraduate housing.[5][6]