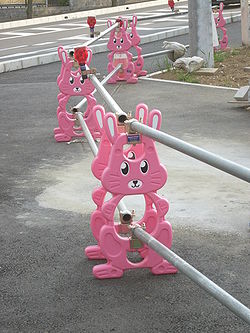 An example in construction work: Temporary guardrail in Narita.

Sōichi Masubuchi 増渕聡一 (Masubuchi Sōichi?) in his work, Kawaii Syndrome, claims "cute" and "neat" have taken precedence over the former Japanese aesthetics of "beautiful" and "refined".[9]

Japanese women who feign cute behaviors (e.g., high-pitched voice, squealing giggles[10]) that could be viewed as forced or inauthentic are called burikko and this is considered a gender performance.[11] The term burikko (鰤子?) is formed with buri (鰤, literally ‘amberjack’ a fish), a pun on furi (‘to pretend or pose’)[12], and ko (子, ‘child’).[11] It was a neologism developed in the 1980s by singer Kuniko Yamada 山田邦子 (Yamada Kuniko?).[11]

In Japan, cuteness is expected of men and women.[13] There is a trend of men shaving their legs to mimic the "asexual" look.[13] Many Japanese men are drawn to the owner of cute merchandise, because it is reminiscent of little girls,[14] and Japanese women try to act cute to attract men.[13] A study by Kanebo, a cosmetic company, found that Japanese women in their 20s and 30s favored the "cute look" with a "childish round face".[8]

The original definition of kawaii came from Lady Murasaki's The Tale of Genji where it referred to pitiable qualities.[9] During the Shogunate period under the ideology of neo-Confucianism, women came to be included under the term kawaii as the perception of women from being animalistic was replaced with the conception of women as docile.[9]

The rise of cuteness in Japanese culture emerged in the 1970s as part of a new style of writing.[15] Many teenage girls began to write laterally using mechanical pencils.[15] These pencils produced very fine lines, as opposed to traditional Japanese writing that varied in thickness and was vertical.[15] Also, the girls would write in big, round characters and they added little pictures to their writing, such as hearts, stars, smiley faces, and letters of the Latin alphabet.[15]

These pictures would be inserted randomly and made the writing very hard to read.[15] As a result, this writing style caused a lot of controversy and was banned in many schools.[15] During the 1980s, however, this new "cute" writing was adopted by magazines and comics and was put onto packaging and advertising.[15]

From 1984–1986, Kazuma Yamane 山根和麻 (Yamane Kazuma ?) studied the development of cute handwriting, which he called Anomalous Female Teenage Handwriting, in depth.[15] This type of cute Japanese handwriting has also been called: marui ji (丸い字?), meaning "round writing," koneko ji (小猫字?), meaning "kitten writing," manga ji (漫画字?), meaning "comic writing," and burikko ji (鰤子字?), meaning "fake-child writing"[16] Although it was commonly thought that the writing style was something that teenagers had picked up from comics, he found that teenagers had come up with the style themselves, as part of an underground movement.[15]

Tomoyuki Sugiyama 杉山奉文 (Sugiyama Tomoyuki?), author of Cool Japan, claims cute fashion in Japan can be traced back to the Edo Period with the popularity of netsuke. [8]

Because of this growing trend, companies such as Sanrio came out with merchandise like Hello Kitty. Hello Kitty was an immediate success and the obsession with cute continued to progress in other areas as well. The 1980s also saw the rise of cute idols, such as Seiko Matsuda, who is largely credited with popularizing the trend. Women began to emulate Seiko Matsuda and her cute fashion style and mannerisms, which emphasized the helplessness and innocence of young girls.[17] The market for cute merchandise in Japan is driven by Japanese girls between 15 and 18 years old.[18]

No longer limited to teenagers, however, the spread of making things as cute as possible, even common household items, was embraced by people of all ages. Now there are airplanes painted with Pokémon characters on the side, and each of Japan’s 47 prefectures, the Tokyo police, and even the public broadcaster NHK all have their own cute mascots. Domokun, the unique-looking and widely recognized NHK mascot, was introduced in 1998 and quickly took on a life of its own, appearing in Internet memes and fan art around the world. Currently, Sanrio’s line of more than 50 characters takes in more than $1 billion a year and it remains the most successful company to capitalize on the cute trend.[14] 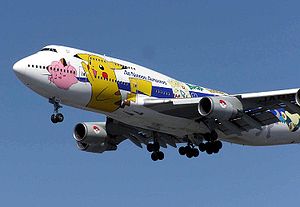 An All Nippon Airways Boeing 747 with a Pokémon livery.

Cute elements can be found almost everywhere in Japan, from big business to corner markets and national government, ward, and town offices.[14][13] Many companies, large and small, use cute mascots to present their wares and services to the public. For example:

Cute can be also used to describe a specific fashion sense[20][7] of an individual, and generally includes clothing that appears to be made for young children, apart from the size, or clothing that accentuates the cuteness of the individual wearing the clothing. Ruffles and pastel colors are commonly (but not always) featured, and accessories often include toys or bags featuring anime characters.[14]

Cute in Western countries but not in Japan

Cabbage Patch Kids dolls did not sell well in Japan, because the Japanese considered their facial features to be "ugly" and "grotesque" compared to the flatter and almost featureless face of Hello Kitty.[9] Also, Barbie did not become successful in Japan compared to the Rika-chan doll who was modeled after a pre-pubescent girl.[9] 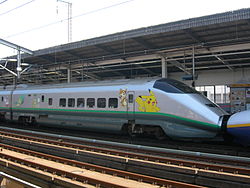 As a cultural phenomenon, cuteness is increasingly accepted in Japan as a part of Japanese culture and national identity. Tomoyuki Sugiyama 杉山奉文 (Sugiyama Tomoyuki?), author of "Cool Japan", believes that "cuteness" is rooted in Japan's harmony-loving culture, and Nobuyoshi Kurita 栗田経惟 (Kurita Nobuyoshi?), a sociology professor at Musashi University in Tokyo, has stated that "cute" is a "magic term" that encompasses everything that's acceptable and desirable in Japan.[24]

Influence on other cultures

Cute merchandise and products are especially popular in some other parts of East Asia, such as China, Hong Kong, South Korea, Singapore, Taiwan and Thailand.[14][25]