A versatile player, Pavlich is widely regarded as one of the premier AFL centre half-forwards of the modern era, achieving All-Australian selection six times between 2002 and 2008, twice representing Australia in the International Rules Series and representing the Dream Team in the 2008 Hall of Fame Tribute Match.

Pavlich has played his AFL entire career at Fremantle where he is a six time best and fairest winner and club captain since 2007.

Born in South Australia, he made his AFL debut in 2000 and wears guernsey number 29.

Pavlich was born in Adelaide, South Australia and is a fifth generation Australian. His mother is of Scottish and German descent and father Steve is of Scottish, Irish and Croatian descent. Steve played along with Matthew's two uncles at the West Torrens Football Club and also coached at junior and reserve level.[1]

Pavlich played school football at Sacred Heart College in Adelaide and followed the footsteps of his father, playing senior football for the Woodville-West Torrens Eagles before he was drafted into the AFL.[2]

Pavlich was recruited by Fremantle (the Dockers) with the fourth selection in the 1999 AFL national draft. Pavlich had nominated for the 1998 draft, but was overlooked by several clubs. Most notably the Adelaide Crows instead drafted 17 year old Ken McGregor who went on to play 158 games between 1999 to 2008, and cross town rival Port Adelaide who instead chose 17 year old Adam Morgan who played only 3 games between 2002 to 2003 for Port. 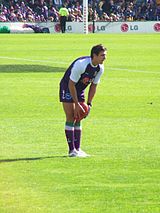 Since his first game for Fremantle, Pavlich has consistently shown all the attributes of a key forward: physical size (a height of 192 cm and a weight of 101 kg), strength, speed and agility. However, it was not until 2005 that he played primarily at centre half forward. Although still developing physically, Pavlich managed to stamp his authority on Fremantle initially in his debut season. Making his debut in round 5 2000 against Melbourne, Pavlich achieved the rare feat of kicking 2 goals with his first 2 kicks in the AFL. He went on to play 18 games for the season, earning himself a Rising star nomination while contributing consistently.

The 2001 Season saw Pavlich spend more time in the Forward line. He managed to underline his potential with some eye catching performances including two 4-goal hauls against the Brisbane Lions which earned him 2 brownlow votes, the first of his career. Pavlich went on to play 21 games for the season, finishing with a respectable 28 goals. In an otherwise disappointing season for Fremantle, Pavlich was the shining light as he started to realise his true potential.

2002 was the season that would set up Matthew Pavlich for the rest of his career. In a widely unexpected move, new Fremantle coach Chris Connolly moved Pavlich into a defensive role. Playing against some of the power forwards of the competition, Pavlich underlined his versatility and talent as a footballer, as he displayed a smooth transition into the role. He showed the uncanny ability of shutting down opponents, while gathering plenty of possession and setting up play further up the ground. This saw him earn his first All-Australian selection at fullback at the age of 20. 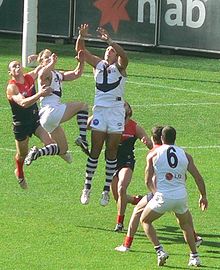 Pavlich flies high for a mark against Melbourne in 2008

In the 2003 season he was again called upon to play a different role, Pavlich was this time thrust into a midfield role, while also pushing up to half forward. This allowed him to gather multiple possessions forward of centre and develop into a strong goal-kicking midfielder. Playing all 23 games for the season, including the club's first final, Pavlich finished off averaging 18.7 possessions per game, and executed his damaging midfield role perfectly with 37 goals.[3] He was rewarded with a second selection in the All-Australian team for the 2003 season, this time named on the Half Forward Flank.

The 2005 season saw Matthew Pavlich moved to Centre Half Forward, with Fremantle focusing on a taller forward structure. The move paid massive dividends for the team, as Pavlich topped Fremantle's list of goalkickers, with 61 goals for the season. He also took more marks than any other Docker and won his second Doig Medal as Fremantle's best and fairest player. In the 2005 Brownlow Medal count, Pavlich was tipped as a contender, but like Tredrea in 2004, the power forwards did not get the votes of the umpires and Pavlich finished equal ninth; receiving more votes than any other Fremantle player. 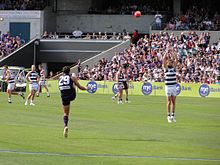 Matthew Pavlich kicks for goal during the AFL game between Fremantle Dockers and Geelong in 2010, which Fremantle won

Despite the additional burden of captaincy, Pavlich performed well throughout the 2007 season, leading an otherwise disappointing Fremantle side. He kicked a club record 72 goals, came second in the Coleman Medal and was named full-forward in the All-Australian team for 2007.

On 14 August 2007 Pavlich signed a new, 3-year contract with the Fremantle Football club, which ended speculation that he may join the Adelaide Crows or Port Adelaide. The contract is rumoured to be worth $2.5 million.[4]

In 2008, despite Fremantle again missing the finals, Pavlich won his fifth Doig Medal, as well as being Fremantle's leading goalkicker, the Ross Glendinning Medal in both Western Derbies and his sixth All-Australian selection.[5]