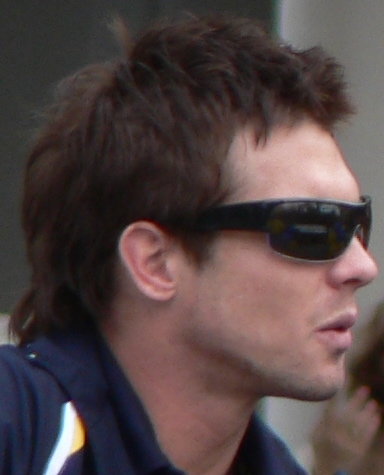 Cousins' football career has been marred by several off-field incidents which have attracted considerable negative publicity. These incidents involved , traffic convictions and associations with criminal elements. On several occasions he was fined or sanctioned by the West Coast Eagles culminating in his contract being terminated on 17 October 2007.

Cousins was born in but was raised in Perth with his parents Stephanie and Bryan, a former star footballer himself, and siblings Matthew, Sophie and Melanie. He played junior football for the Bullcreek-Leeming Junior Football Club, before being recruited to the WAFL to play for East Fremantle (because Bullcreek-Leeming was in the East Fremantle zone). He was educated at Wesley College where he was vice-captain of the school football team.

Cousins was drafted in 1995 by the West Coast Eagles under the , as his father Bryan (a star player himself in the local competition) had played 67 games for the in the then-VFL. This clause allowed him to choose between playing for the , the newly formed Fremantle Dockers and the West Coast Eagles. The prospect of remaining in his hometown of Perth led Cousins to opt for the Eagles.

Ben Cousins was the captain of West Coast from 2001 until 2005 and played his 200th AFL game during the 2005 season. Cousins was a dominant player in the 2005 season, leading most AFL media awards for best player as the Eagles secured a second place finish in the regular season. The season culminated in him winning the 2005 Brownlow Medal, by one vote, from teammate . He also led the West Coast Eagles to the 2005 AFL Grand Final which the team lost to the by four points.

In February 2006 Cousins resigned his captaincy following an off-field incident where he ran away from a booze-bus (see below). Following this incident the then vice-captain, , took over the captaincy. Nevertheless, Cousins helped carry the team to their first premiership in 12 years to become the 2006 AFL Premiers. He played a key role in the 2006 Grand Final, achieving 18 possessions and kicking two of West Coast's 12 goals.

On 29 June 2007 Cousins was given clearance by the AFL to resume training with the , which he did on the following Monday. It had been rumoured that he would make his return to the side the following weekend against the , but Cousins suffered a pulled hamstring in training on the day before the game and missed the next two weeks. Cousins made his return to football on 21 July 2007 in a match against arch-rivals Sydney at Subiaco Oval. He started on the bench but six minutes into the first quarter he was given the green light and received a huge reception from the Eagles' home crowd who gave him a standing ovation. Cousins proceeded to gain 38 disposals in one of the best matches of his AFL career. Cousins was named man of the match and received a $5000 Plasma TV for his efforts. [cite news |title=Cousins suffers injury setback |url= http://ninemsn.sportal.com.au/default.aspx?s=afldisplay&id=30448 |publisher=NineMSN |date= |accessdate=2007-07-06]

Cousins was officially delisted by the Eagles on 30 November 2007. The Eagles wanted to do so before the National Draft, but due to the uncertainty of possible legal action and/or contract payouts, his delisting was delayed to avoid a possible salary cap breach. [http://afl.com.au/Season2007/News/NewsArticle/tabid/208/Default.aspx?newsId=53954]

In 2001 was warned by Liam Fitzpatrick, a Perth detective that Cousins was using illegal drugs. Judge passed this on to the club administration but no action was taken.

In September 2002 Cousins was involved in a brawl with team mate at a Perth nightclub, in which Kerr punched him in the face during the club's end of season celebrations. Later the same night, Kerr pushed Cousins down a flight of stairs, breaking his arm. The fight was believed to be about Kerr's relationship with Cousins' sister Melanie.

In May 2005 Cousins and then West Coast team mate were criticised for involvement with a group of alleged Perth underworld figures. According to allegations the two Eagles players received phone calls from gangland figures both before and after a stabbing and shooting at the nightclub. Police questioned Cousins and Gardiner about the incident but they refused to co-operate. The club told the pair that they were on their "last warning" and that their off-field behaviour would not be tolerated.

On 12 February 2006 Cousins avoided a by running from his car in the middle of a major Perth highway and from police as they ordered him to stop. [cite news |title=Cousins charged by police
url= http://www.abc.net.au/news/items/200602/1579632.htm?perth |publisher= ABC|date= 2006|accessdate=2007-03-24 ] His role as captain of the Eagles was quickly put in doubt following the incident, and on 20 February he read out a statement in front of media at Subiaco Oval announcing his resignation as captain. [cite news |title=Cousins quits Eagles captaincy |url= http://www.abc.net.au/news/newsitems/200602/s1574280.htm |publisher=Australian Broadcasting Corporation |date= |accessdate=2007-03-20 ] He was charged on summons on 27 February with one count of obstructing traffic and one count of obstructing police. He pleaded guilty to both charges and was fined $900.

In early December 2006 Cousins was arrested in and spent four hours in jail after being in a disoriented and uncontrolled state at the . Photographs of Cousins showing him apparently passed out outside the Casino were later printed in newspapers. Cousins did not need to go to court and was not fined, and the club decided not to discipline him, saying the media scrutiny was sufficient punishment.

Diagnosis of drug addiction and rehabilitation (2007)

West Coast club chairman announced at a press conference, on 20 March 2007, that Cousins had been suspended indefinitely for his failure to attend two training sessions.

On 22 March Cousins' father, Bryan, stated that his son had a "" problem.

Cousins arrived back in Perth on 30 April 2007 to continue treatment in an outpatient program. [cite news |title=Good to be home, says Cousins |url= http://www.theage.com.au/news/Sport/Good-to-be-home-says-Cousins/2007/04/30/1177788036694.html |publisher=The Age |date= 2007-04-30|accessdate=2007-04-30] Several days later he issued a statement apologising to his team mates, his club the West Coast Eagles, the AFL and the community. He said he was continuing rehabilitation and did not know when he would return to football. [Digby Beacham. "Football not my priority, say Cousins". "". 5 May 2007]

In September, Ben Cousins again reached the media spotlight, as he was one of the last to see an agitated and depressed (former West Coast Eagles dual Premiership player) before he died. Mainwaring died after taking cocaine, ecstasy, cannabis, anti-depressants, and alcohol. The initially stated that Cousins had tested negative to a drug test the day following Mainwarings death. However, at the press conference to announce Cousins dismissal, club officials stated that the club didn't drug test Cousins and that they had no knowledge of a drug test. His family doctor has since said that Cousins had tested negative to a blood test that he had taken after Mainwaring's death. [cite news|url=http://news.ninemsn.com.au/article.aspx?id=30298|title=Mainwaring died of drug cocktail: report|publisher= AAP|accessdate=2007-10-23|date=2007-10-17] [cite news|url = http://www.news.com.au/dailytelegraph/story/0,22049,22615769-5001021,00.html|title=Chemical cocktail but Ben Cousins charge axed | publisher = The Daily Telegraph|accessdate = 2007-10-23|date = 2007-10-20] [cite news|title = cousins-volunteered-for-drug-test|publisher = Realfooty|accessdate =2007-10-23|date = 2007-03-10|url = http://realfooty.com.au/news/news/cousins-volunteered-for-drug-test/2007/10/02/1191091115098.html]

His playing contract with the West Coast Eagles football was terminated the next day.

Upon appearing at the initial hearing at the Perth Magistrates Court on 18 October Cousin's lawyer request a 90 day adjournment while Cousins completes his drug rehabilitation program and stated that they would be pleading not guilty. The magistrate remanded the hearing until 21 January 2008. [ [http://www.abc.net.au/news/stories/2007/10/18/2062888.htm Cousins to plead not guilty to charges] 18 October 2007]

The lawyer for Cousins stated on 19 October that the possession of a prohibited drug charge would be withdrawn by police. The Director of Public Prosecution stated that the drug which he was charged with possessing, , was only a prohibited drug when found in an injectable form.

Cousins flew to on 27 October, apparently with the intention of continuing his drug rehabilitation at the Summit Center clinic. He was reported to have failed to attend and several days later was admitted to a Los Angeles hospital following an alleged binge. [ [http://www.abc.net.au/am/content/2007/s2087253.htm "Cousins makes headlines after alleged cocaine binge"] 10 November 2007] [ [http://www.aflcentral.com.au/ben-cousins-alleged-5-day-drug-binge/ "Ben Cousins alleged 5 day drug binge"] 9 November 2007] Los Angeles police decided not to lay any charges relating to the incident. [ [http://www.abc.net.au/news/stories/2007/11/20/2095424.htm "US cops: No charges against Cousins"] Nov 20, 2007]

In an unprecedented move, the AFL requested Cousins to appear before them to consider his behaviour and whether he had brought the game into disrepute. [ [http://www.realfooty.com.au/articles/2007/11/19/1195321648151.html "Cousins fronts AFL hearing"] 19 November 2007] After a seven-hour hearing before the Commission of Conduct on 19 November, AFL chief executive announced the League's decision that he was "found guilty of conduct unbecoming and likely to prejudice the interest of the AFL and [of] bringing the game into disrepute" [ [http://news.realfooty.com.au/cousins-banned-by-afl-for-12-months/20071119-1b9l.html "Cousins banned by AFL for 12 months"] 19 November 2007] and that he was banned from playing for 12 months [ [http://www.abc.net.au/news/stories/2007/11/19/2095135.htm "Cousins slapped with 12-month ban"] 19 November 2007] At the press conference, Cousins stated: "I would like to apologise to the AFL players and supporters for the embarrassment that my conduct has brought to the game". He also acknowledged that he was fighting a drug addiction and was on track to beat it.

In February 2008, Ben Cousins spoke about his drug addiction for the first time since he went into hiding last year. Speaking at an anti-drugs forum, hosted by boxer Anthony Mundine, Cousins described himself as an educated man who learned at school that drugs could be bad, "At the end of the day, I enjoyed my 12 years," he said. "I really don't think I had to leave the Eagles... I am someone who has lost my footy chances. I hurt my family and friends, but I will be back training and avoid the local chemist."

He is training with WAFL clubs Perth and East Fremantle in a bid to be re-drafted to a new AFL club in the 2008 AFL National Draft.When asked about how he was coping with addiction, Cousins said, "Life's good - I'm in a good place at the moment."

In the weeks leading up to the grand final many clubs have expressed a great interest in signing him. He has said that he will wait until late this year before making his final decisons on wether he wants to play in the AFL next year, "I think there's no guarantees in football, I've missed a lot of footy in the last year-and-a-half and obviously there's the associated risk with addiction, it being a chronic relapse condition, but I'll make a full recovery."

Collingwood sent a private investigator to Perth last month to follow Cousins for several days. The investigator surveyed his behaviour and social circle. The outcome of the probe is believed to be highly encouraging and was presented to the Collingwood management on the eve of the finals series. St Kilda have also showed strong interest in securing him.