The first tour, known as the Australian Football World Tour, took place in 1967, with matches played in Ireland, the United Kingdom, and the United States. The following year, games were played between Australia and a touring County Meath Gaelic football team, Meath being that year's All-Ireland football champions.[1] Following intermittent international tests between Australia and Ireland, the International Rules Series between the senior Australian international rules football team and Ireland international rules football team has been played annually since 1998 (except for the cancelled 2007 edition), and has generally been a closely matched contest. The sport has raised interest and exposure in developing markets for Gaelic and Australian football and has been considered a development tool by governing bodies of both codes, particularly by the AFL Commission.

International rules football does not have any dedicated clubs or leagues. It is currently played by men's, women's, and junior teams only in tournaments or once-off Test matches. 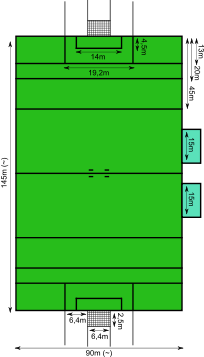 The rules are designed to provide a compromise between those of the two codes, with Gaelic football players being advantaged by the use of a round ball and a rectangular field (Australian rules uses an oval ball and field), while the Australian rules football players benefit from the opportunity to tackle between the shoulders and thighs, something banned in Gaelic football. The game also introduces the concept of the mark, from Australian rules football, with a free kick awarded for any ball caught from a kick of over 15 metres.[2]

A player must bounce, solo or touch the ball on the ground once every 10 metres or six steps.[2] A maximum of two bounces per possession are allowed, while players can solo the ball as often as they wish on a possession.[2] Unlike in Gaelic football, the ball may be lifted directly off the ground, without putting a foot underneath it first.[2] Players however cannot scoop the ball off the ground to a team-mate, nor pick up the ball if they are on their knees or on the ground.[2] If a foul is committed, a free kick will be awarded, referees can give the fouled player advantage to play on at their discretion.[2]

The game uses two large posts and two small posts, as in Australian rules, and a crossbar and goal net as in Gaelic football.

Points are scored as follows:

An international rules match lasts for 72 minutes (divided into four quarters of 18 minutes each).[2] Inter-county Gaelic football matches go on for 70 minutes, divided into two halves, and Australian rules matches consists of four 20 minutes quarters of game time, although with the addition of stoppage time, most quarters actually last between 25 and 30 minutes.

As in Gaelic football, teams consist of fifteen players, including a goalkeeper, whereas eighteen are used in Australian rules (with no keeper).

A number of rule changes were introduced before the 2006 International Rules Series:

The first games were the idea of Australian sports broadcaster and media personality Harry Beitzel, who organised a tour in October 1967 to play County Meath after Meath had won that year's All-Ireland Senior Football Championship. The Galahs defeated County Meath 3-16 to 1-10 at Croke Park, and then defeated County Mayo 2-12 to 2-5. The following year, Beitzel organised a second series, the Australian Football World Tour, in which an Australian representative team played six matches against Gaelic sides London, Dublin, Meath, Kerry, and New York. In 1968, Meath visited Australia for a five-match tour, winning all the games by an aggregate score of 26-43 to 3-29.[5] The feature game of the tour was their victorious rematch with the Galahs at Princes Park in Melbourne. Kerry also won all their games when they toured Australia in 1970.[5] Beitzel returned in October 1978 and his team played UCD, Dublin and Kerry.[5] It wasn’t until after Australian schoolboy teams toured Ireland in 1981 and 1984 and a Dublin Colleges team toured Australia in 1983 that a full-blown international rules series was arranged.[5]

The current senior International Rules Series is played each October, after the completion of the AFL Grand Final and the All-Ireland Football final, which are both played on the last weekend of September.

The series alternates host countries each year between Ireland and Australia. Between 1998 and 2006, the average attendance was 48,199. Ireland had won eight matches, while Australia had also won eight, with a further two being drawn. The 2006 series sold out both matches in Ireland and set a record for international sports in Ireland with a crowd of 82,127 at Croke Park.

Following controversies in the 2006 series, including an Irish player being knocked unconscious in a tackle, the Irish team coach and GAA president again cast doubts on the future of the series. The AFL's chief, however expressed optimism. The two organisations agreed to meet to once again discuss the series.

The International Rules series resumed in October 2008 with Ireland defeating the Australians by five points on aggregate (the series was played in Australia).

Among the first schoolboys' international tests was that played in Melbourne in 1983, when a Victorian under-17 team played Ireland. An interesting twist in these compromise matches is that the ball used was the oval shaped Australian football rather than the round ball.[7]

In 2005, in addition to the annual senior international series, Australia and Ireland began to play an under-19 and under-17 contest. Australia won the 2006 series.[8] The junior series was largely instituted by both leagues as a means to identify emerging talent. It has since been abandoned.

The Australian Amateur Football Council has sent an amateur All-Australian team to Ireland in both 2005 and 2008. Unlike the professional vs amateur matches between the AFL and GAA, these matches are fully amateur which has typically meant stronger Irish sides. The Australian amateur team wears a different jersey to the AFL representative side, dark green and gold, with a kangaroo emblem.

International rules also has a masters category with several competitions. There is also a Masters International Rules Series which follows the format of the senior men's series and involves many retired Australian Rules and Gaelic Football players.

International rules football around the world

International rules is played in various locations throughout North America and the Caribbean, Europe, Asia, and Australia and New Zealand between fledgling Australian rules football and Gaelic football clubs.

In 2006, an exhibition match between South African youth teams and an Indigenous Australian touring side composed of players from the Clontarf Foundation, led by Sydney's Adam Goodes, was held at Potchefstroom.

The game was played in great spirit despite the cold damp conditions at Limhamnsfältet where the GAA boys and Maulers share the pitch. The Gaelic Footballers of Malmö GAA Club ended up winners on a scoreline of: Malmö GAA Club 5:6:7 = 55 pts Port Malmo Maulers 1:5:9 = 30 pts