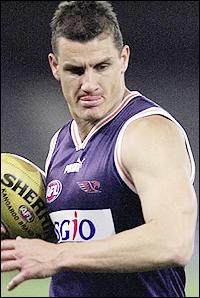 Glen was recruited from South Fremantle in and debuted in 1991 and played most of his career at the Centre Half Back position; selected in that position in the of 1994 and 1995.

Glen was notable for his duels with rival Centre Half Forward, 's . Carey was considered to be one of the best of all time, and the contests between these two were highly anticipated events on the football calendar.

After undergoing a in 1996 he was unable to recapture his superlative form of the previous three years. Although still able to win his club's best and fairest award in 2000, he was not the imposing player of the past; who at his peak was rated by many as one of the very best players in the competition.

His brother was a for the . During their career, the two brothers lined up against each other on more than one occasion.

Much taller than his brother at 193 cm, but at 100 kg, both brothers were similarly large in stature.

Glen Jakovich retired from football in 2004.

Jakovich now is an Expert Commentator on and .

In 2008 he was inducted into the AFL Hall of Fame.