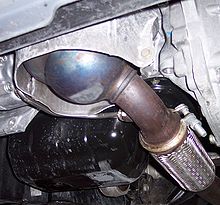 A diesel particulate filter (top left) in a Peugeot 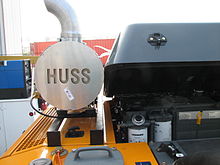 A diesel particulate filter (or DPF) is a device designed to remove diesel particulate matter or soot from the exhaust gas of a diesel engine. Wall-flow diesel particulate filters usually remove 85% or more of the soot, and under certain conditions can attain soot removal efficiencies of close to 100%. Some filters are single-use, intended for disposal and replacement once full of accumulated ash. Others are designed to burn off the accumulated particulate either passively through the use of a catalyst or by active means such as a fuel burner which heats the filter to soot combustion temperatures; engine programming to run when the filter is full in a manner that elevates exhaust temperature or produces high amounts of NOx to oxidize the accumulated ash, or through other methods. This is known as "filter regeneration". Cleaning is also required as part of periodic maintenance, and it must be done carefully to avoid damaging the filter. Failure of fuel injectors or turbochargers resulting in contamination of the filter with raw diesel or engine oil can also necessitate cleaning.[1] The regeneration process occurs at road speeds higher than can generally be attained on city streets; vehicles driven exclusively at low speeds in urban traffic can require periodic trips at higher speeds to clean out the DPF.[2] If the driver ignores the warning light and waits too long to operate the vehicle above 40 miles per hour (64 km/h), the DPF may not regenerate properly, and continued operation past that point may spoil the DPF completely so it must be replaced.[3]

Particulate filters have been in use on non-road machines since 1980, and in automobiles since 1985.[citation needed] Diesel engines during combustion of the fuel/air mix produce a variety of particles generically classified as diesel particulate matter due to incomplete combustion. The composition of the particles varies widely dependent upon engine type, age, and the emissions specification that the engine was designed to meet. Two-stroke diesel engines produce more particulate per unit of power than do four-stroke diesel engines, as they burn the fuel-air mix less completely.

Historically medium and heavy duty diesel engine emissions were not regulated until 1987 when the first California Heavy Truck rule was introduced capping particulate emissions at 0.60 g/BHP Hour. Since then, progressively tighter standards have been introduced for light- and heavy-duty roadgoing diesel-powered vehicles and for off-road diesel engines. Similar regulations have also been adopted by the European Union and some individual European countries, most Asian countries, and the rest of North and South America.[4]

While no jurisdiction has explicitly made filters mandatory, the increasingly stringent emissions regulations that engine manufactures must meet mean that eventually all on-road diesel engines will be fitted with them. In the European Union, filters are expected to be necessary to meet Euro.VI heavy truck engine emissions regulations currently under discussion and planned for the 2012-2013 time frame. PSA Peugeot Citroën was the first company to make them standard fit on passenger cars in 2000, in anticipation of the future Euro V regulations.

As of December 2008 the California Air Resources Board (CARB) established the 2008 California Statewide Truck and Bus Rule which—with variance according to vehicle type, size and usage—require that roadgoing diesel heavy trucks and buses in California be retrofitted, repowered, or replaced to reduce particulate matter (PM) emissions by at least 85%. Retrofitting the engines with CARB-approved diesel particulate filters are one way to fulfill this requirement.[5] In 2009 the American Recovery and Reinvestment Act provided funding to assist owners in offsetting the cost of diesel retrofits for their vehicles.[6] Other jurisdictions have also launched retrofit programs, including: 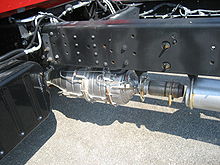 Unlike a catalytic converter which is a flow-through device, a DPF cleans exhaust gas by forcing the gas to flow through the filter. There are a variety of diesel particulate filter technologies on the market. Each is designed around similar requirements:

The most common filter is made of cordierite (a ceramic material that is also used as catalytic converter supports (cores)). Cordierite filters provide excellent filtration efficiency, are (relatively) inexpensive, and have thermal properties that make packaging them for installation in the vehicle simple. The major drawback is that cordierite has a relatively low melting point (about 1200 °C) and cordierite substrates have been known to melt down during filter regeneration. This is mostly an issue if the filter has become loaded more heavily than usual, and is more of an issue with passive systems than with active systems, unless there is a system break down.

Cordierite filter cores look like catalytic converter cores that have had alternate channels plugged - the plugs force the exhaust gas flow through the wall and the particulate collects on the inlet face.

The second most popular filter material is silicon carbide, or SiC. It has a higher (2700 °C) melting point than cordierite, however it is not as stable thermally, making packaging an issue. Small SiC cores are made of single pieces, while larger cores are made in segments, which are separated by a special cement so that heat expansion of the core will be taken up by the cement, and not the package. SiC cores are usually more expensive than cordierite cores, however they are manufactured in similar sizes, and one can often be used to replace the other. Silicon carbide filter cores also look like catalytic converter cores that have had alternate channels plugged - again the plugs force the exhaust gas flow through the wall and the particulate collects on the inlet face.

The characteristics of the wall flow diesel Particulate filter substrate are as follows: Broad band filtration (the diameters of the filtered particles are 0.2-150 μm); High filtration efficiency (can be up to 95%); High refractory; High mechanical properties. High boiling point.

Fibrous ceramic filters are made from several different types of ceramic fibers that are mixed together to form a porous media. This media can be formed into almost any shape and can be customized to suit various applications. The porosity can be controlled in order to produce high flow, lower efficiency or high efficiency lower volume filtration. Fibrous filters have an advantage over wall flow design of producing lower back pressure. Ceramic wall-flow filters remove almost completely the carbon particulates, including fine particulates of less than 100 nanometers (nm) diameter with an efficiency of >95% in mass and >99% in number of particles over a wide range of engine operating conditions. Since the continuous flow of soot into the filter would eventually block it, it is necessary to 'regenerate' the filtration properties of the filter by burning-off the collected particulate on a regular basis. Soot particulates burn-off forms water and CO2 in small quantity since it is less than 0.05% of the CO2 emitted by the engine.

Some cores are made from metal fibers - generally the fibers are "woven" into a monolith. Such cores have the advantage that an electrical current can be passed through the monolith to heat the core for regeneration purposes, allowing the filter to regenerate at low exhaust temperatures and/or low exhaust flow rates. Metal fiber cores tend to be more expensive than cordierite or silicon carbide cores, and generally not interchangeable with them.[why?]

Disposable paper cores are used in certain specialty applications, without a regeneration strategy. Coal mines are common users — the exhaust gas is usually first passed through a water trap to cool it, and then through the filter. Paper filters are also used when a diesel machine must be used indoors for short periods of time, such as on a forklift being used to install equipment inside a store.

Filters require more maintenance than catalytic converters. Ash, a byproduct of oil consumption from normal engine operation, builds up in the filter as it cannot be converted into a gas and pass through the walls of the filter. This increases the pressure before the filter. Warnings are given to the driver before filter restriction causes an issue with driveability or damage to the engine or filter develop. Regular filter maintenance is a necessity.

In 2011, Ford recalled 37,400 F-Series trucks with diesel engines after fuel and oil leaks caused fires in the diesel particulate filters of the trucks. No injuries occurred before the recall, though one grass fire was started.[7] A similar recall was issued for 2005-2007 Jaguar S-Type and XJ diesels, where large amounts of soot became trapped in the DPF. In affected vehicles, smoke and fire emaneated from the car's underside, accompanied by flames from the rear of the exhaust. The heat from the fire could cause heating through the transmission tunnel to the interior, melting interior components and potentially causing interior fires.[8]

Metering pump for Diesel or additive injection, 3 L/h at 5 bar

Diagram of the regeneration

Regeneration is the process of removing the accumulated soot from the filter. This is done either passively (from the engine's exhaust heat in normal operation or by adding a catalyst to the filter) or actively introducing very high heat into the exhaust system. On-board active filter management can use a variety of strategies:

All on-board active systems use extra fuel, whether through burning to heat the DPF, or providing extra power to the DPF's electrical system, although the use of a fuel borne catalyst reduces the energy required very significantly. Typically a computer monitors one or more sensors that measure back pressure and/or temperature, and based on pre-programmed set points the computer makes decisions on when to activate the regeneration cycle. The additional fuel can be supplied by a metering pump. Running the cycle too often while keeping the back pressure in the exhaust system low will result in high fuel consumption. Not running the regeneration cycle soon enough increases the risk of engine damage and/or uncontrolled regeneration (thermal runaway) and possible DPF failure.

Diesel particulate matter burns when temperatures above 600 degrees Celsius are attained. This temperature can be reduced to somewhere in the range of 350 to 450 degrees Celsius by use of a fuel borne catalyst. The actual temperature of soot burn-out will depend on the chemistry employed. The start of combustion causes a further increase in temperature. In some cases, in the absence of a fuel borne catalyst, the combustion of the particulate matter can raise temperatures above the structural integrity threshold of the filter material, which can cause catastrophic failure of the substrate. Various strategies have been developed to limit this possibility. Note that unlike a spark-ignited engine, which typically has less than 0.5% oxygen in the exhaust gas stream before the emission control device(s), diesel engines have a very high ratio of oxygen available. While the amount of available oxygen makes fast regeneration of a filter possible, it also contributes to runaway regeneration problems.

Many forklifts may also use off-board regeneration - typically mining machinery and other machinery that spend their operational lives in one location, which makes having a stationary regeneration station practical. In situations where the filter is physically removed from the machine for regeneration there is also the advantage of being able to inspect the filter core on a daily basis (DPF cores for non-road applications are typically sized to be usable for one shift - so regeneration is a daily occurrence).[9]

A Diesel Oxidation Catalyst or DOC is another exhaust aftertreatment device for diesel engines. DOCs contain palladium and platinum which serve as catalysts to oxidise hydrocarbons and carbon monoxide into carbon dioxide and water in the following reactions:

DPFs intended for retrofitment to existing vehicles may require application-specific certification, type approval, or other homologation. Programs such as the London low emission zone require retrofit emission control equipment to be certified for use on a particular vehicle or engine and inspected annually to ensure they are still operating as designed and intended.[citation needed]