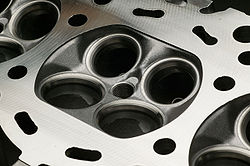 In automotive engineering, a multi-valve (or multivalve) engine is one where each cylinder has more than two valves. A multi-valve engine has better breathing and can spin at higher rpm than a two-valve engine, yielding more power.[citation needed]

A multi-valve design typically has three, four, or five valves per cylinder to achieve improved performance. Any four-stroke internal combustion engine needs at least two valves per cylinder: one for intake of air and fuel, and another for exhaust of combustion gases. Adding more valves increases valve area and improves the flow of intake and exhaust gases, thereby enhancing combustion, volumetric efficiency, and power output. Multi-valve geometry allows the spark plug to be ideally located within the combustion chamber for optimal flame propagation. Multivalve engines tend to have smaller valves with a lower reciprocating mass, allowing more power from higher rpm, without the danger of valve bounce.

Less common is the five-valve head, with two exhaust valves and three inlet valves. All five valves are similar in size. This design allows excellent breathing, and, and as every valve is small, high rpm and very high power outputs are available. It has been questioned whether a five-valve configuration gives a worthwhile benefit over four-valve designs.[1] In theory, a five-valve design should "rev" higher, but and the three inlet ports should give both good cylinder-filling and high turbulence (both desirable traits). After making the five-valve Genesis engine for several years, Yamaha returned to the more cost-effective four-valve design.

An early example was the 1912 Peugeot[citation needed]. Starting in 1922, many Bugatti engines used three valves per cylinder actuated by a single overhead camshaft (sohc) and multi-valve engines continued to be popular in racing and sports engines.

The first mass-produced car using four valves per cylinder was the British Triumph Dolomite Sprint of 1973 which used a chain-driven SOHC 16-valve engine (four valves per cylinder) producing 127 bhp (95 kW; 129 PS). Such engines soon became common as Japanese manufacturers adopted the multi-valve concept. Nissan's 1988-1992 SOHC KA24E engine had three valves per cylinder (two intakes, one exhaust). Nissan upgraded to the DOHC after 1992 for some of the sports cars, including the 240SX. Mercedes and Ford also produce three-valve V6 and V8 engines, Ford claiming an 80% improvement in high rpm breathing without the added cost of a DOHC valve train. The Ford design uses one spark plug per cylinder located in the centre, but the Mercedes design uses two spark plugs per cylinder located on opposite sides, leaving the centre free to add a direct-to-cylinder fuel injector at a later date.

Yamaha designed the cylinder head for the Toyota 4A-GE 20V Silvertop and Blacktop engine used in the MR2 and some Corollas. Mitsubishi were the first to market a car engine with five valves per cylinder, with the 548 cc 3G81 engine in their Minica Dangan ZZ kei car in 1989.[2][3] Bugatti EB110, Ferrari F355, Volkswagen-Audi-Skoda and Toyota have all produced five-valve engined vehicles.

Although most multi-valve engines have overhead camshafts, either SOHC or DOHC; but a multivalve engine may be a pushrod OHV design. Chevrolet has revealed a three-valve version of its Generation IV V8 which uses pushrods to actuate forked rockers, and Cummins makes a four-valve OHV straight six diesel, the Cummins B Series (now known as ISB).

Examples of motorcycles with multivalve-engines include:

The XT660 single once had five valves, but a subsequent redesign reduced the valve-count to four.