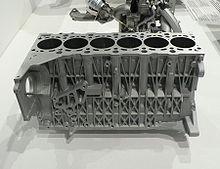 A modern passenger car engine block, integrating the crankcase and all cylinders. The cylinder head bolts to the deck surface at top. Many ribs and bosses can be seen on the side of the casting. This block is for a straight-six engine. 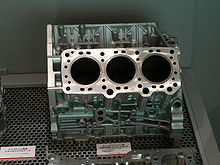 A V6 diesel engine block, with both of the cylinder banks as well as the crankcase formed en bloc. 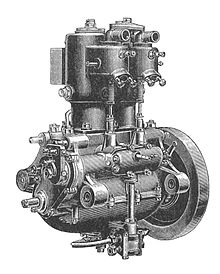 De Dion-Bouton engine with discrete crankcase but with monobloc integration of the cylinders and heads, circa 1905. A discrete crankcase with upper and lower halves (each its own casting) can clearly be seen, with the bottom half constituting both part of the main bearing support and also an oil sump.[1]

A cylinder block is an integrated structure comprising the cylinder(s) of a reciprocating engine and often some or all of their associated surrounding structures (coolant passages, intake and exhaust passages and ports, and crankcase). The term engine block is often used synonymously with "cylinder block" (although technically distinctions can be made between en bloc cylinders as a discrete unit versus engine block designs with yet more integration that comprise the crankcase as well).

In the basic terms of machine elements, the various main parts of an engine (such as cylinder(s), cylinder head(s), coolant passages, intake and exhaust passages, and crankcase) are conceptually distinct, and these concepts can all be instantiated as discrete pieces that are bolted together. Such construction was very widespread in the early decades of the commercialization of internal combustion engines (1880s to 1920s), and it is still sometimes used in certain applications where it remains advantageous (especially very large engines, but also some small engines). However, it is no longer the normal way of building most petrol engines and diesel engines, because for any given engine configuration, there are more efficient ways of designing for manufacture (and also for maintenance and repair). These generally involve integrating multiple machine elements into one discrete part, and doing the making (such as casting, stamping, and machining) for multiple elements in one setup with one machine coordinate system (of a machine tool or other piece of manufacturing machinery). This yields lower unit cost of production (and/or maintenance and repair).

Today most engines for cars, trucks, buses, tractors, and so on are built with fairly highly integrated design, so the words "monobloc" and "en bloc" are seldom used in describing them; such construction is often implicit. Thus "engine block", "cylinder block", or simply "block" are the terms likely to be heard in the garage or on the street.

The move from extensive use of discrete elements (via separate castings) to extensive integration of elements (such as in most modern engine blocks) was a gradual progression that passed through various phases of monobloc engine development, wherein certain elements were integrated while others remained discrete. This evolution has occurred throughout the history of reciprocating engines, with various instances of every conceptual variation coexisting here and there. (This is an example of how the history of technology is a profusion of scattered data points with the waxing and waning of themes and trends, as opposed to any simplistic linear progression from "bad" to "good".) The increase in prevalence of ever-more-integrated designs relied on the gradual development of foundry and machining practice for mass production. For example, a practical low-cost V8 engine was not feasible until Ford developed the techniques used to build the Ford flathead V8 engine, which soon also disseminated to the larger society. (Such techological dissemination tends to happen via a zeitgeist of independent, competitive development just as much as via technology transfer or reverse engineering). Today the foundry and machining processes for manufacturing engines are usually highly automated, with a few skilled workers to manage the making of thousands of parts.

Cylinders integrated into one or several cylinder blocks

Cylinders are cast in three pairs 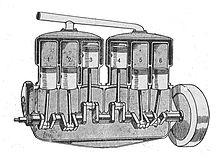 Cylinders are cast in two blocks of three

A cylinder block is a unit comprising several cylinders (including their cylinder walls, coolant passages, cylinder sleeves if any, and so forth). In the earliest decades of internal combustion engine development, monobloc cylinder construction was rare; cylinders were usually cast individually. Combining their castings into pairs or triples was an early win of monobloc design.

Each cylinder bank of a V engine (that is, each side of the V) typically comprised one or several cylinder blocks until the 1930s, when mass production methods were developed that allowed the modern form factor of having both banks plus the crankcase entirely integrated.

A wet liner cylinder block features cylinder walls that are entirely removable, which fit into the block by means of special gaskets. They are referred to as "wet liners" because their outer sides come in direct contact with the engine's coolant. In other words, the liner is the entire wall, rather than being merely a sleeve. Wet liner designs are popular with European manufacturers, most notably Renault and Peugeot, who continue to use them to the present. Dry liner designs use either the block's material or a discrete liner inserted into the block to form the backbone of the cylinder wall. Additional sleeves are inserted within, which remain "dry" on their outside, surrounded by the block's material. With either wet or dry liner designs, the liners (or sleeves) can be replaced, potentially allowing overhaul or rebuild without replacement of the block itself; but in reality, they are difficult to remove and install, and for many applications (such as most late-model cars and trucks), an engine will never undergo such a procedure in its working lifespan. It is likelier to be scrapped, with new equipment—engine or entire vehicle—replacing it. This is sometimes rightfully disparaged as a symptom of a throw-away society, but on the other hand, it is actually sometimes more cost-efficient and even environmentally protective to recycle machinery and build new instances with efficient manufacturing processes (and superior machine performance and emission control) than it is to overvalue old machinery and craft production. 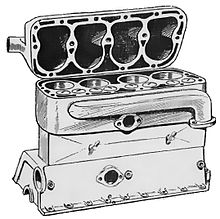 A flathead engine with integral cylinder bank and crankcase. The head is tipped upward to reveal the deck. This example is typical of engines of the 1930s through 1950s.

Casting technology at the dawn of the internal combustion engine could reliably cast either large castings, or castings with complex internal cores to allow for water jackets, but not both simultaneously. Most early engines, particularly those with more than four cylinders, had their cylinders cast as pairs or triplets of cylinders, then bolted to a single crankcase.

As casting techniques improved, an entire cylinder block of 4, 6, or 8 cylinders could be cast as one. This was a simpler construction, thus less expensive (unit-wise) to make. For straight engines, this meant that one engine block could now comprise all the cylinders plus the crankcase. Monobloc straight fours, uncommon when the Ford Model T was introduced with one in 1908, became common during the next decade, and monobloc straight sixes followed soon after. By the mid-1920s, both were common, and the straight sixes of General Motors (along with other features that differentiated GM's various makes and models from the Model T) were prying market share away from Ford. (These were all flathead designs.) During that decade, V engines retained a separate block casting for each cylinder bank, with both bolted onto a common crankcase (itself a separate casting). For economy, some engines were designed to use identical castings for each bank, left and right.[2] The complex ducting required for intake and exhaust was too complicated to allow the integration of the banks, except on a few rare engines, such as the Lancia 22½° narrow-angle V12 of 1919, that did manage to use a single block casting for both banks.[3] The hurdles of integrating the banks of the V for common, affordable cars were first overcome by the Ford Motor Company with its Ford flathead V-8, introduced in 1932, which was the first V-8 with a single engine block casting, putting an affordable V-8 into an affordable car for the first time.[4]

The communal water jacket of monobloc designs permitted closer spacing between cylinders. The monobloc design also improved the mechanical stiffness of the engine against bending and the increasingly important torsional twist, as cylinder numbers, engine lengths, and power ratings increased.

Most engines made today, except some unusual V or radial engines, are a monobloc of crankcase and all cylinders. In such cases, the skirts of the cylinder banks form a crankcase area of sorts, which is still often called a crankcase despite no longer being a discrete part.

Light-duty consumer-grade Honda GC-family small engines use a monobloc design where the cylinder head, block, and half the crankcase share the same casting, termed 'uniblock' by Honda.[5] One reason for this, apart from cost, is to produce an overall lower engine height. Being an air-cooled OHC design, this is possible thanks to current aluminum casting techniques and lack of complex hollow spaces for liquid cooling. The valves are vertical, so as to permit assembly in this confined space. On the other hand, performing basic repairs becomes so time-consuming that the engine can be considered disposable. Commercial-duty Honda GX-family engines (and their many popular knock-offs) have a more conventional design of a single crankcase and cylinder casting, with a separate cylinder head.

Honda produces many other head-block-crankcase monoblocs under a variety of different names, such as the GXV-series. They may all be externally identified by a gasket which would bisect the crankshaft on an approximately 45° angle.

Exhaust valve failure is common and, owing to the monobloc design, so labour-intensive to repair that the engine is normally discarded.

Many farm tractor designs have incorporated their engine block, transmission case, and rear axle housing as frame members. Probably the first was the Fordson tractor, but many others followed. As with many other instances of integration of components into fewer castings, lower unit cost of production was the driver.