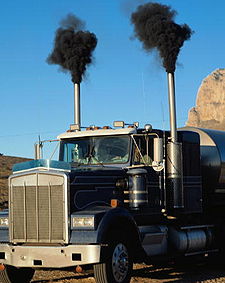 Emission of soot from a large diesel truck, without particle filters

/ˈsʊt/) is a general term that refers to impure carbon particles resulting from the incomplete combustion of a hydrocarbon. It is more properly restricted to the product of the gas-phase combustion process but is commonly extended to include the residual pyrolyzed fuel particles such as cenospheres, charred wood, petroleum coke, and so on, that may become airborne during pyrolysis and that are more properly identified as cokes or chars. The gas-phase soots contain polycyclic aromatic hydrocarbons (PAHs).[1] The PAHs in soot are known mutagens [2] and are classified as a "known human carcinogen" by the International Agency for Research on Cancer (IARC).[3]

Soot, as an airborne contaminant in the environment has many different sources but they are all the result of some form of pyrolysis. They include soot from internal combustion engines, power plant boilers, hog-fuel boilers, ship boilers, central steam heat boilers, waste incineration, local field burning, house fires, forest fires, fireplaces, furnaces, etc. These exterior sources also contribute to the indoor environment sources such as smoking of plant matter, cooking, oil lamps, candles, quartz/halogen bulbs with settled dust, fireplaces, defective furnaces, etc. Soot in very low concentrations is capable of darkening surfaces or making particle agglomerates, such as those from ventilation systems, appear black. Soot is the primary cause of "ghosting", the discoloration of walls and ceilings or walls and flooring where they meet. It is generally responsible for the discoloration of the walls above baseboard electric heating units and can be know as a gas. The formation of soot depends strongly on the fuel composition.[4] The rank ordering of sooting tendency of fuel components is: naphthalenes → benzenes → aliphatics. However, the order of sooting tendencies of the aliphatics (alkanes, alkenes, alkynes) varies dramatically depending on the flame type. The difference between the sooting tendencies of aliphatics and aromatics is thought to result mainly from the different routes of formation. Aliphatics appear to first form acetylene and polyacetylenes; aromatics can form soot both by this route and also by a more direct pathway involving ring condensation or polymerization reactions building on the existing aromatic structure .[5][6]

Soot is a powder-like form of amorphous carbon.

Soot is in the general category of airborne particulate matter, and as such is considered hazardous to the lungs and general health when the particles are less than five micrometres in diameter, as such particles are not filtered out by the upper respiratory tract.[citation needed] Smoke from diesel engines, while composed mostly of carbon soot, is considered especially dangerous—owing both to its particulate size and to the many other chemical compounds present.[citation needed]