Permanent makeup is a cosmetic technique which employs tattoos (permanent pigmentation of the dermis) as a means of producing designs that resemble makeup, such as eyelining and other permanent enhancing colors to the skin of the face, lips, and eyelids. It is also used to produce artificial eyebrows, particularly in people who have lost them as a consequence of old age, disease, such as alopecia, chemotherapy, or a genetic disturbance, and to disguise scars and white spots in the skin such as in vitiligo. It is also used to restore or enhance the breast's areola, such as after breast surgery.

Most commonly called permanent cosmetics, other names include dermapigmentation, micropigmentation, and cosmetic tattooing,[1] the latter being most appropriate since permanent makeup is, in fact, tattooing. In the United States and other countries, the inks used in permanent makeup and the pigments in these inks are subject to FDA or similar agency regulation as cosmetics and color additives. 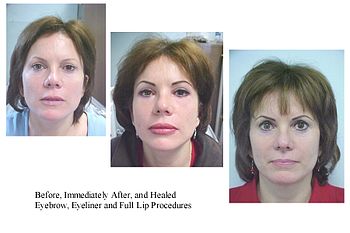 Permanent Makeup - Before, immediately after and healed for Brow, Eyeliner and Lip procedures

Permanent makeup regulations vary from country to country: sometimes by state, province, county or even city to city. For instance, in the US, while in most areas it falls under the cognizance of the Department of Health, State Boards of Cosmetology are often the oversight agency. In fact, in some areas a cosmetology or esthetics license is required, while in other areas, cosmetologists are prohibited from conducting these procedures. Exclusive to Australia, practitioners are prohibited from advertising the procedures as "permanent" since it is commonly known that tattoos will fade over time and it is their opinion that the "…benefits of cosmetic tattooing are not permanent and will generally only last three to five years." The purpose of the ACCC action was to alert the consumer public to the fact that touch ups may be required to maintain optimal appearance.[2] Some believe this position is not consistent with the fact that permanent makeup is tattooing and tattooing is a permanent process.[3]

Before undergoing any form of cosmetic tattooing, it is essential to ensure that a salon has appropriate approvals from their local health authorities for skin penetration procedures. It is important to note that just because a salon has local health approvals for general beauty therapy services does not necessarily mean that they have approval for cosmetic tattooing procedures, it is prudent to insist on seeing the certificate of registration.

Mobile tattooing (in home) services may be a breach of Health Guidelines in some locations, for example in Melbourne Australia they prohibit mobile tattooing services.[4]

Permanent makeup dates back at least to the start of the 20th century, though its nature was often concealed in its early days. The tattooist George Burchett, a major developer of the technique when it become fashionable in the 1930s, described in his memoirs how beauty salons tattooed many women without their knowledge, offering it as a "complexion treatment ... of injecting vegetable dyes under the top layer of the skin."[5][6]

Permanent makeup results in enhanced features of the face—definition is rendered to eyebrows, eyes and lips by the use of colors. Results can imitate topically applied cosmetics or can be quite unnoticeable, depending upon the design, color value and amount of pigment used.[7]

At first, permanent makeup results may look harsh. This is due to color remaining in the outermost epidermal layers of skin at the start. Color softens within a few days during the healing process as the upper layers of epidermis slough and are replaced by new epidermal cells.

The best possible color results can perform for many years or may begin to fade over time. How much time is individual per person. While permanent makeup pigment remains in the dermis its beauty-span may be influenced by several possible factors. These can be environmental, procedural and/or individual factors.[3] Sun exposure fades color. The amount and color of pigment deposit at the dermal level can affect the length of time that permanent makeup looks its best. Very natural looking applications are likely to require a touch-up before more dramatic ones for this reason. Individual influences include lifestyles that find an individual in the sun regularly such as with gardening or swimming. Skin tones are a factor in color value changes over time.

Permanent makeup is a welcome enhancement for most recipients. There are cases, however, of undesired results.[8] The 4 most common complaints are "too dark," "wrong color," "uneven" and "too big." A skilled, experienced, permanent makeup professional is able to adjust the color and evenness of permanent makeup results in most cases. A design that is too large presents a serious challenge, however. Costly pigment lightening techniques and/or removal may be the only solutions.

However, before embarking on the aforementioned removal/correction procedures, it should also be noted that you still have the option of applying conventional makeup to correct any imperfections or to further enhance the overall effect.

As with tattoos, permanent makeup can be difficult to remove. Common techniques used for this are laser resurfacing, dermabrasion (physical or chemical exfoliation), and surgical removal. Camouflaging—adding a new pigment which counteracts the tattoo color and attempts to emulate normal skin color is considered a poor choice by professionals. Removal is more painful and laborious than the tattooing itself.

As with tattoos, permanent makeup may have complications, such as allergies to the pigments, formation of scars, granulomas and keloids, skin cracking, peeling, blistering and local infection.[9] The use of unsterilized tattooing instruments may infect the patient with serious diseases such as HIV and hepatitis. Removal problems may also ensue, due to patient dissatisfaction or regret, and they may be particularly difficult to remove in places such as eyelids and lips without leaving permanent sequelae.

On very rare occasions, people with permanent makeup have reported swelling or burning in the affected areas when they underwent magnetic resonance imaging (MRI). 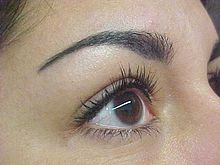 This client had her eyebrows and top eyeliner permanently tattooed. The eyebrow tattooing is an example of a "powdery filled" technique as opposed to individual hairline strokes since the client already has eyebrow hair but simply wanted an enhancement and shaping. The top eyeliner represents a thin eyeliner tattoo and a "lash enhancement" procedure that is used to define the eye without making it look excessively made up.