COVERGIRL is an American cosmetics brand founded in 1960 in Maryland, by the Noxzema Chemical Company (later called Noxell) and acquired by Procter & Gamble in 1989. The Noxell Company advertised this cosmetics line by allowing "cover girls", fashion models who appear on the front cover of women's magazines, to wear its products. COVERGIRL makes up for lack of direct individual customer service by providing a wide variety of cosmetics available at reasonable prices.[1] 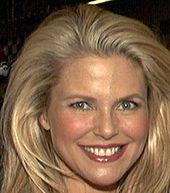 Christie Brinkley long-running contract with CoverGirl is the longest ever of any model in history.[2]

In 1962, model (and later, actress) Jennifer O'Neill signed on as COVERGIRL spokeswoman at the age of sixteen, appearing in both print and television advertising that year.[3] Her unprecedented thirty-year endorsement of the product catapulted COVERGIRL into the top-selling makeup line in the country.[4]

Cybill Shepherd was one of COVERGIRL's earliest models, appearing in several print and television advertisements for the brand. In contrast to the "made-up" looking fashion models of the late 1960s, Cybill demonstrated a fresh, wholesome look,[5] appealing to a younger consumer's taste. These advertisements established the "girl-next-door" look that CoverGirl would become associated with.[6]

COVERGIRL was one of the largest global brands to conduct animal testing but that is no longer the case. Over a decade ago, Procter & Gamble's Beauty & Grooming businesses discontinued testing on animals and committed itself to developing non-animal alternative methods to ultimately permit the elimination of animal testing.[7]

Procter & Gamble Company, owner of COVERGIRL products, recently[when?] launched "Clean Makeup for Clean Water", a charitable program aimed toward providing clean drinking water to places and people in need.[8] Diana Ramirez is the newest spokesmodel for COVERGIRL's Clean Makeup Sensitive formula that is a campaign for COVERGIRL's partnership with Children's Safe Drinking Water. With the help of the Clean Makeup line, COVERGIRL has donated $500,000 to the program, that provided 50 million liters of drinking water to children across the world.[9]

COVERGIRL is sold primarily in drugstores, convenience stores, and supermarkets. Maybelline Cosmetics (owned by L'Oréal), is COVERGIRL's biggest competition, as both companies market to similar groups of consumers, and sell their products at similar prices. Examples of more expensive cosmetic competitors sold in drugstores and supermarkets include Revlon, Almay, Neutrogena, L'Oréal, and Max Factor, (Max Factor is the sister company of COVERGIRL). Less expensive competitors in drugstores include NYC Cosmetics and Wet 'n' Wild Cosmetics.

In 1992, Cover Girl became the first major cosmetic company to sign a black model to an exclusive contract. Canadian Lana Ogilvie became the first black woman[10] to represent a non-ethnic cosmetics company,[11] and opened the door for traditionally Caucasian-focused brands to embrace different cultures and ethnicities in their brand.[12] Today most major brands have one or more black models or celebrities under contract.