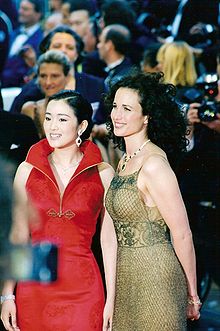 Actresses Gong Li and Andie MacDowell have both appeared in many advertisements for L'Oréal.

Cosmetic advertising is the promotion of cosmetics and beauty products by the cosmetics industry through a variety of media. The advertising campaigns are usually aimed at women wishing to improve their appearance, commonly to increase physical attractiveness and reduce the signs of ageing.

Many campaigns have come under fire through their alleged use of pseudoscience and their promotion of unrealistic goals. Moreover, many campaigns are accused of inducing harmful habits on people (such as bulimia and anorexia), and leading to destructive plastic surgery practices.

In addition, cosmetic advertising is often accused of excessively using photo manipulation to enhance the appearance of models, instead of using the cosmetics themselves, creating an unrealistic image of the product's benefits, Estée Lauder for example.