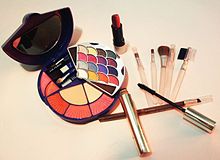 Cosmetics ingredients come from a variety of sources but, unlike the ingredients of food, are often not considered by most consumers. Cosmetics often use vibrant colours that are derived from some unexpected sources, ranging from crushed insects to rust. Many new techniques have allowed manufacturers to synthesise such colours and the use of animals (or parts thereof) has been declining for many years and is now virtually eliminated, due in large part to the efforts of Beauty Without Cruelty, PETA and other groups.[citation needed]

Cosmetics in a variety of forms date back to early civilizations, with the need to improve ones personal appearance being an important factor in attracting a mate. Over the years the ingredients have changed dramatically as we discovered how to manufacture our own scents and cosmetic formulae. The realisation of the dangers of many common ingredients also greatly affected the growing industry.[citation needed]

Ancient Egyptian aristocracy made use of minerals to provide colour and definition to their facial features. During the era of the Greek Empire it was common to use face paints, while the Romans indulged in baths containing oil-based perfume.[citation needed]

Castor oil and its derivatives are found in many cosmetics as it is "non-comedogenic" (does not exacerbate or contribute to acne).[1]

Cerebrosides (cells from the nervous systems of cattle or swine) were once used in some high-end skin-care products to increase moisture retention and to create a smooth skin surface,[2] however the BSE controversy has put an end to this practice.[citation needed]

In many countries colours in cosmetics are listed as numbers from the Colour Index International. The scheme covers colours used in food, personal care products, cosmetics, household products and fabric dyeing. So, for example you will not normally see tartrazine listed in lipstick ingredients, but it may be there listed as C.I. 19140. Erythrosine will be listed as C.I. 45430, and so on. In US and Canada colors are listed as FD & C colors. tartrazine (E012) is FD & C Yellow 5 and erythrosine (E127) is FD & C Red 3.

Strong red colours for eye products have been produced using the dye carmine, made from carminic acid extracted form the crushed bodies of the cochineal insect.[citation needed] Carmine was once the only bright red color permitted by the FDA for use around the eye.[citation needed] 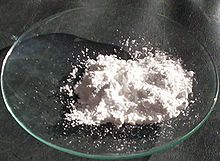 Pearlescence, also sometimes spelled as "pearl essence", is a shine or gloss effect commonly used in a wide variety of cosmetic products. The most usual source of pearlescence is the natural mineral mica covered by a thin layer of titanium dioxide. This coating causes goniochromism – the colour appears through interference effects with the naturally translucent mica, and varying the thickness of the titanium dioxide changes the colour.[3] Alternatives exist, including the suspension of tiny flakes of a suitable material within the product, often a wax such as glycol distearate. A shimmery substance found on fish scales, most usually obtained from herring and one of many by-products of commercial fish processing, can also be used for pearlescent effects, primarily in nail polish, but is now rarely used due to its high cost, bismuth oxychloride flakes being used as a substitute instead.[2]

Women of Roman Britain used a foundation made from animal fat, starch and tin oxide.[4] 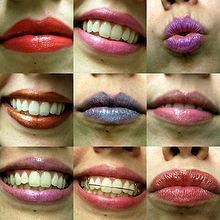 Lipstick is known to have been used around 5000 years ago in ancient Babylon, when semi-precious jewels were crushed and applied to the lips and occasionally around the eyes. Ancient Egyptians extracted purplish-red dye from fucus-algin, 0.01% iodine, and some bromine mannite, which resulted in serious illness. Cleopatra had her lipstick made from crushed carmine beetles, which gave a deep red pigment, and ants for a base.[5]

The red color of modern lipstick can come from synthetically derived pure iron oxide (common iron rust), however most leading brands use the more economical synthetic colors. In the United States, every batch of synthetic dye and pigment must have a sample sent to the US FDA for testing and certification that the batch is pure and its contaminants are below the levels specified by law (Federal Food, Drug and Cosmetic Act CHAPTER VII—GENERAL AUTHORITY SUBCHAPTER B—COLORS LISTING AND CERTIFICATION OF COLOR ADDITIVES FOR FOODS, DRUGS, AND COSMETICS [1]). Synthetic colours are listed in the ingredients as a code (e.g.: F &D red no 6) and may contain up to 10 parts per million of lead / 3 parts per million of arsenic. (Code of Federal Regulations, Title 21, Volume 1 -FOOD AND DRUGS, CHAPTER I—FOOD AND DRUG ADMINISTRATION, DEPARTMENT OF HEALTH AND HUMAN SERVICES, PART 74—LISTING OF COLOR ADDITIVES SUBJECT TO CERTIFICATION) There is some controversy over the presence of these trace ingredients, especially since makeup worn on the lips is not just absorbed through the skin, but also swallowed with drinking and eating. Since lowering these levels would make the production and sale of practically all lipstick illegal, and since the FDA has determined that the existing levels are safe, the cosmetic industry continues to produce and sell lipstick. (Color Additives: FDA's Regulatory Process and Historical Perspectives)[2]

Typically, the pigment is crushed very finely (7 to 10 micrometres) while being mixed with castor oil and is then mixed with a wax base to form a finished lipstick.

Lipsticks may be sheer or dense, matte or shiney. In their thinnest and most fluid consistency they are given their own category, lipgloss.

Islamic cultures contributed significantly in the development of western perfumery in both perfecting the extraction of fragrances through steam distillation and introducing new, raw ingredients. Both of the raw ingredients and distillation technology significantly influenced western perfumery and scientific developments, particularly chemistry.[6]

As traders, Islamic cultures such as the Arabs and Persians had wider access to different spices, herbals, and other fragrance material. In addition to trading them, many of these exotic materials were cultivated by the Muslims such that they can be successfully grown outside of their native climates. Two examples of this include jasmine, which is native to South and Southeast Asia, and various citrus, which are native to East Asia. Both of these ingredients are still highly important in modern perfumery.[6]

The Crusaders brought alcohol-based perfumes back to Europe from the Middle East in the 13th Century.[7] The first modern perfume, made of scented oils blended in an alcohol solution, was made in 1370 at the command of Queen Elizabeth of Hungary and was known throughout Europe as Hungary Water. France quickly became the European centre of perfume and cosmetic manufacture, cultivating vast amounts of flowers for their essence. By the 18th century, aromatic plants were being specifically grown in the Grasse region of France to provide the growing perfume industry with raw materials.[citation needed]

Perfume had been used to mask body odour for many hundreds of years, but in the late 19th century the ability to reduce such odour was developed. The original active ingredient of antiperspirants was aluminium chloride but complaints of skin irritation led to the increased use of aluminium chlorohydrate as an alternative.[7] Aluminium has been established as a neurotoxin and has been shown to adversely affect the blood-brain barrier, cause DNA damage, and have adverse epigenetic effects.[8][9] Research has shown that the aluminum salts used in antiperspirants have detrimental effects to a number of species such as non-human primates,[10] mice,[11] dogs[12] and others. An experiment with mice found that applying an aqueous solution of aluminum chloride to the skin resulted in "a significant increase in urine, serum, and whole brain aluminium."[13] Other experiments on pregnant mice showed transplacental passage of aluminum chloride.[11]

Legislation varies from country to country but most countries have some sort of formal legislation that either restrict or prohibit certain ingredients or products. There are two main sources for cosmetics safety. The EU Cosmetics Directive 76/768/EEC and the Canadian Cosmetic Ingredient Hotlist.[3][4]

A new version of the EU's Cosmetics Directive was adopted by the European Parliament, 24 March 2009.[14] It namely includes new rules concerning the use of nanoparticles in cosmetics and includes stricter rules on animal testing of cosmetics.[15]

Cosmetic colourants are highly regulated and also used as food dyes.[citation needed] . Each country or group of countries has their own regulatory agency that controls what can go into cosmetics. In the United States, the regulating body is the Food and Drug Administration. Aside from color additives, cosmetic products and their ingredients are not subject to FDA regulation prior to their release into the market. It is only when a product is found to violate Federal Food, Drug, and Cosmetic Act (FD&C Act) and Fair Packaging and Labeling Act (FPLA) after its release that the FDA may start taking action against this violation. The FDA may request a recall if the company refuses to remove an unsafe product from the market, work with the Department of Justice to remove contaminated or misbranded products, request a restraining order to prevent further shipments of contaminated or misbranded products, and take action against the company violating the law. A company may use any ingredient, other than color additives and those ingredients banned from use in cosmetics through regulation, as long the completed product and its ingredients is safe, is properly labeled, and isn’t contaminated or misbranded under the FD&C Act and the FPLA. FDA can and does perform inspections.[16]

The search for new ingredients and products often brings controversy, typically over ingredients whose function is unproven or disputed. [17]

There are few potential dangers regarding the use of cosmetics. One such danger is the use of old mascara. Some mascaras contain an ingredient that breaks down to produce formaldehyde. The formaldehyde prevents the growth of bacteria. Aged mascara, however, may no longer be producing formaldehyde, allowing bacteria to proliferate. For this reason, it is often recommended to replace a tube of mascara every few months .[18][19]

In one well-known case, Buddy Ebsen was originally cast as the "Tin Man" in the The Wizard of Oz. Aluminium dust was used to create a tin effect. As the result of an allergic reaction, he was hospitalized and Jack Haley replaced him. Aluminium dust was, instead, added to a paste.[citation needed]