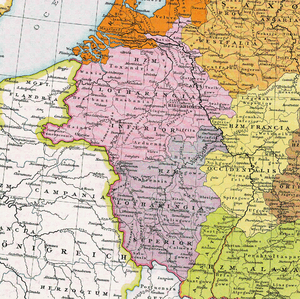 Lotharingia divided, around 1000: the pink is Lower Lorraine, while the purple is Upper Lorraine.

The Duchy of Lower Lorraine or Lower Lotharingia (also referred to sometimes as Lothier in titles), established in 959 was a stem duchy of the medieval German kingdom, which encompassed part of modern-day Belgium, the Netherlands, the northern part of the German Rhineland and a part of northern France east of the Schelde river.

It was created out of the former Middle Frankish realm of Lotharingia under King Lothair II, that had been established in 855. Lotharingia was divided for much of the later ninth century, reunited under Louis the Younger by the 880 Treaty of Ribemont and upon the death of East Frankish king Louis the Child in 911 again joined West Francia under King Charles the Simple. It then formed a duchy in its own right, and about 925 Duke Gilbert declared homage to the German king Henry the Fowler, an act which King Rudolph of France was helpless to revert. From that time on Lotharingia (or Lorraine) remained a German stem duchy, the border with France did not change throughout the Middle Ages.

In 959 King Henry's son Duke Bruno the Great divided Lotharingia into two duchies: Lower and Upper Lorraine (or Lower and Upper Lotharingia) and granted Count Godfrey I of Mons (Hainaut) the title of a Duke of Lower Lorraine. Godfrey's lands were to the north (lower down the Rhine river system), while Upper Lorraine was to the south (further up the river system). Both duchies formed the western part of the Holy Roman Empire established by Bruno's elder brother Emperor Otto I in 962.

Both Lotharingian duchies took very separate paths thereafter: Upon the death of Godfrey's son Duke Richar, Lower Lorraine was directly ruled by the Emperor, until in 977 Otto II enfeoffed Charles, the exiled younger brother of King Lothair of France. Lower and Upper Lorraine were once again briefly reunited under Gothelo I from 1033 to 1044. After that, the Lower duchy was quickly marginalised, while Upper Lorraine came to be known as simply the Duchy of Lorraine.

Over the next decades the significance of the Duchy of Lower Lorraine diminuished and furthermore was affected by the conflict between Emperor Henry IV and his son Henry V: In 1100 Henry IV had enfeoffed Count Henry of Limburg, who Henry V, having enforced the abdication of his father, immediately deposed and replaced by Count Godfrey of Louvain. Upon the death of Duke Godfrey III in 1190, his son Duke Henry III of Brabant inherited the ducal title by order of Emperor Frederick I Barbarossa at the Diet of Schwäbisch Hall. Thereby the Duchy of Lower Lorraine finally lost its territorial authority, while the remnant Imperial fief held by the Dukes of Brabant was later called the Duchy of Lothier (or Lothryk).

After the territorial power of the duchy was shattered, many fiefdoms came to independence in its area. The most important ones of these were:

The following successor states remained under the authority of the titular dukes of Lower Lorraine (Lothier):