Oakville is a town in Halton Region, on Lake Ontario in Southern Ontario, Canada, and is part of the Greater Toronto Area. As of the 2006 census the population was 165,613.[2]

In 1793, Dundas Street was surveyed for a military road. In 1805, the Legislative Assembly of Upper Canada bought the lands between Etobicoke and Hamilton from the Mississaugas aboriginal people, except for the land at the mouths of Twelve Mile Creek (Bronte Creek), Sixteen Mile Creek, and along the Credit River. In 1807, British immigrants settled the area surrounding Dundas Street as well as on the shore of Lake Ontario.

In 1820, the Crown bought the area surrounding the waterways. The area around the creeks, 960 acres (3.9 km2), ceded to the Crown by the Mississaugas,[3] was auctioned off to William Chisholm in 1827. He left the development of the area to his son, Robert Kerr Chisholm and his brother-in-law, Thomas Merrick.

Oakville's first industries included shipbuilding, timber shipment, and wheat farming. In the 1850s, there was an economic recession and the foundry, the most important industry in town, was closed. Basket-making became a major industry in the town, and the Grand Trunk Railway was built through it.

The town eventually became industrialized with the opening of Cities Service Canada (later BP Canada, and now Petro Canada) and Shell Canada oil refineries (both now closed), the Procor factory (no longer manufacturing), and, most importantly, the Ford Motor Company's Canadian headquarters and plant, all close to the Canadian National Railway and the Queen Elizabeth Way highway between Toronto and Fort Erie (Buffalo).

In 1962 the town of Oakville merged with its neighbouring villages (Bronte, Palermo, Sheridan, and the remainder of Trafalgar Township) to become the new Town of Oakville, reaching northwards to Steeles Avenue in Milton. In 1973, the restructuring of Halton County into Halton Region brought the northern border southwards to just north of the future Highway 407.

Oakville's Planning Department divides the town into communities. These divisions have little to do with politics and are based on traditional neighbourhoods.[4] 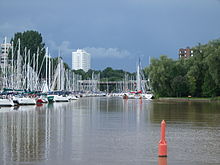 Old Oakville is located in South-Central Oakville along the shore of Lake Ontario. It is the original Oakville Settlement and is centred on Oakville Harbour.[5]

Bronte is located in Southwest Oakville along the shore of Lake Ontario. It is a community centred on Bronte Harbour and includes the Coronation Park district to its east.[6]

Eastlake is located in Southeast Oakville along the shore of Lake Ontario, also referred to as Joshua Creek. It is bordered on the west by Morrison Creek, to the north by Cornwall Road, and to the east by the Mississauga border.[7]

Glen Abbey is located in West Oakville, with Third Line being the major artery of the community. It is a large area west of the Glen Abbey Golf Course, home of the Canadian Open,[12]

Palermo is located in Northwest Oakville. It is a small community centred on the intersection of Dundas Street and Bronte Road (Highway 25).[13]

River Oaks is located in North-Central Oakville. It includes the Oak Park development.[14]

Uptown Core is located in North Centre Oakville. It includes the area on either side of Trafalgar Road between Dundas Street and Glenashton Drive.[15]

West Oak Trails is located in North Centre West Oakville. It is a newer development than the other communities.[16]

According to the 2006 census, Oakville had a younger population than Canada as a whole. Minors (youth under 19 years of age) totalled 28.1 percent of the population compared to pensioners who number 11.7 percent. This compares with the Canadian average of 24.4 percent (minors) and 13.7 percent (pensioners).[18]

79.4% of residents stated their religion as Christian, almost evenly split between Roman Catholics and Protestants. Non-Christian religions include Islam: 2.0%, Hinduism: 1.3%, Sikhism: 1.1%, and Judaism: 0.7%. 14% indicated no religion.

Oakville has a long history of sporting. The only recognized professional sports team in Oakville is the Oakville Blue Devils of Canadian Soccer League. The Blue Devils are affiliated with the Oakville Soccer Club, which is the biggest soccer club in Canada.[20] Oakville boasts over 60 soccer fields and a Soccer Club Facility with a 2 star full size FIFA Certified indoor soccer pitch.[21]

The other professional team is the Oakville Ice women's ice hockey team of the NWHL. Oakville is home to the Oakville Crusaders Rugby club, the largest in Canada and North America, Crusaders also has the biggest junior rugby program in Canada.[citation needed]

Oakville has the largest Little League Organization in all of Canada. Having the Oakville Whitecaps as their All-star team. Their main field for 12U and under is Chartwell Field were the Home office is.[citation needed]

Beginning in 1982, Oakville's Coronation Park played host to the annual Oakville Waterfront Festival. Among a range of events, the festival included small amusement park rides, arts and crafts, food and drinks, free concerts headlined by Canadian bands, and nightly fireworks displays. The Waterfront Festival took place in late June of each year until 2010, when it was cancelled due to financial difficulties[25], despite having annual attendance of up to 100,000 visitors.

For the Love of the Arts Festival

The For the Love of the Arts Festival is an annual event taking place in the late spring in Oakville. Inaugurated in 2002, the event is hosted by CommUnity Arts Space[2], a local umbrella group advocating for shared physical space for Oakville's arts and cultural groups. Currently the only such multi-disciplinary community festival of its kind in Oakville, the event serves to showcase local talent, skills, crafts, literary art, dance performances, theatre groups and music performances. The event is intended as a symbolic presentation of a "shared space" and is entirely sponsored by local corporate and private donations.

Downtown Oakville also hosts an annual street festival known as Midnight Madness. The event typically takes place during the month of July and provides an opportunity for local stores and vendors to showcase new products and sales, as well as a venue for local artists to perform at a number of street-level stages.

Elementary schools and high schools in Oakville are a mix of private and public schools, with one of the highest ratios of private schools to student population in the country.[citation needed] Oakville is covered by the Halton District School Board, Halton Catholic District School Board, Conseil scolaire de district du Centre-Sud-Ouest, and Conseil scolaire de district catholique Centre-Sud.

The city is home to Appleby College, a private school established in 1911. Oakville is also home to Sheridan College, a renowned animation and business studies institute, and Oakville's only higher education facility.

At the municipal level, the governing body is the Oakville Town Council consisting of a mayor (currently Rob Burton) and twelve councillors. The town is divided into six wards, with two councillors elected by residents of each ward.

Oakville is situated in two provincial ridings which use the same boundaries as the federal ridings and are currently represented provincially by:

Oakville is situated in two federal ridings which are currently represented by:

The Oakville Arts Council (OAC) promotes arts and culture in Oakville. Formed in 1978, the Council is a not-for-profit charitable, umbrella organization representing a large and diverse membership from the Oakville arts community. Its mission is to cultivate the arts and to enrich the creative life of the Community of Oakville. The OAC provides a collective voice for, and is the most comprehensive resource for the Arts in Oakville - connecting the public to more than 300 individual artists, arts groups and business members, their exhibitions, events and classes. Members are entitled to a variety of services intended to enable artistic pursuits including promotional, educational, networking and training opportunities. The Council publishes Arts About Town, Oakville's only magazine dedicated to local artists and arts issues. For more information about the Oakville Arts Council’s services or to visit their up-to-date calendar of local art events visit www.oakvillearts.com.

Oakville Centre for the Performing Arts

Oakville Centre for the Performing Arts

The Oakville Centre for the Performing Arts houses several performances by local and international artists. It is also the performing venue for the Oakville Symphony Orchestra and the Oakville Ballet Company. The Oakville Arts Council provides further artistic talents in the town showcasing films, literary figures and visual arts.

The Town of Oakville boasts many not-for-profit artistic, musical and cultural groups. These groups have been struggling to develop membership and programming due to lacking physical spaces. The groups joined forces in 2004, advocating for a shared space for arts, music and culture in Oakville, spearheaded by an advocacy group called CommUnity Arts Space (CUAS). CUAS has worked for a shared home for the arts and cultural groups for many years and is looking forward to the opening of Oakville's newest community centre in the former Queen Elizabeth Park (QEP) high school in Bronte, Oakville, in September 2011. The 140,000 sq ft (13,000 m2). facility, owned and operated by the Town of Oakville, will provide easy access to recreational, cultural and artistic programmes for residents of all ages, and will provide an enormous range of opportunities for joint programmes, events and educational opportunities.

Oakville is twinned with the cities of Dorval,[27] in Quebec, and Neyagawa,[28] Japan. The Town of Oakville has named two major streets for these cities.

Oakville is primarily served by media based in Toronto with markets in the Greater Toronto Area (GTA) that cover most of the news in the GTA. However, Oakville also has two regional newspapers. The Oakville Beaver is published every Wednesday, Thursday and Friday and Oakville Today is published every Thursday.

The town also has two specialty radio stations: AM 1250 CJYE, a Christian music station and AM 1320 CJMR, a Multicultural station.

The Town of Oakville Water's Air Rescue Force (TOWARF) is a volunteer organization that provides marine search and rescue service in Western Lake Ontario. It was founded in 1954 and was a charter member of the Canadian Coast Guard Auxiliary.[29]