The Weather Network (TWN) is a Canadian English language Category A specialty channel that broadcasts weather-related news and information 24 hours a day.

TWN is based in Oakville, Ontario and is owned by Pelmorex, which is itself principally owned by Pierre L. Morrissette in partnership with the similar American service, The Weather Channel (now controlled by NBC Universal).[2]

Pelmorex also operates MétéoMédia, a French language channel similar to TWN. TWN has a separate feed for the Greater Toronto Area, much like MétéoMédia's separate feed for Metropolitan Montreal, Quebec. An audio-only simulcast of the channel is also broadcast on Sirius Canada channel 138.

Pelmorex employs its own meteorologists to make forecasts and graphical weather products. Pelmorex meteorologists use an in-house technology called Pelmorex Forecast Engine or PFE. Pelmorex also uses a localization technology known as PMX, a proprietary system that is able to deliver separate forecasts for over 1200 locations across Canada. 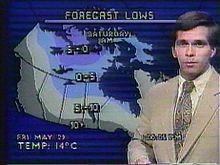 The Weather Network began on September 1, 1988 as WeatherNow, under the ownership of engineering firm Lavalin Inc., now known as SNC-Lavalin.[3] In the early years, the station had been noted for the number of technical difficulties since TWN and MétéoMédia shared a single television signal—the two originally shared an analogue transponder on one of the Anik satellites, with computer-generated local forecasts airing on one while the video feed of a live forecaster or TV commercials aired on the other. The channel gained its present name on May 1, 1989. The two stations began to run separately starting in 1994, while both were still based in Montreal. Initially, a separate feed was set up for MétéoMédia subscribers in the Montreal area, while the shared satellite signal remained in other parts of the country. 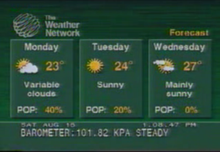 Local forecasts were generated using the same systems owned by The Weather Channel in the U.S. called WeatherStar.[4] TWN began using its own system called PMX in 1996, which is still in use today.

Pelmorex purchased The Weather Network from SNC-Lavalin in 1993, two years after the merger of SNC and Lavalin.[3] The channel launched its web site in 1996.

On May 2, 1998, The Weather Network started broadcasting nationally from its new studio in Mississauga, Ontario after relocating from Montreal. This led to the departure of several presenters, notably those who were on air during weekends (today, Chris St. Clair, is the only presenter from Montreal remaining). Several new presenters arrived at the time. These new presenters included Anwar Knight, Kim MacDonald, and Rory O'Shea. While many of the Montreal presenters initially relocated, including Sherrie Claridge, Lila Feng and Randy Renaud, most were gone from TWN within a year, and generally moved back to Montreal.

Late 2001 marked the beginning of a period of gradual, but significant changes with The Weather Networks programming, starting with the launch of a 7-day and short term precipitation forecast during the Local Forecast. In 2002, The Weather Network introduced "Metacast Ultra", a weather presentation system that consisted of weather maps featuring more than 1200 local communities, commuter routes and regional highways, animated weather icons, and higher resolution weather graphics.[6]

The Weather Network unveiled a redesigned website in 2003 that was faster, more localized, and easier to use. The re-designed site offered clients the opportunity to produce 'weather-triggered ads'. In addition, clients were able to localize their ads by tagging location-specific information onto a particular city or area.[7]

On March 29, 2004, The Weather Network introduced a new 14-day trend outlook as part of the local cable weather package. It provided a two-week look at how the weather would trend compared to normal temperature values and weather conditions for that time of year.[8]

In June 2004, The Weather Network took legal action against Star Choice (Now Shaw Direct) after moving TWN on a new bundle without giving any notice to its subscribers. TWN tried to prevent Star Choice from moving the channel as subscribers would have to pay an additional $7 to watch the channel. In late 2004, TWN made improved local forecast coverage, providing more localized forecasts in up to 1,200 communities across Canada.

The Weather Network relocated its headquarters to Oakville, Ontario in November 2005. The local (Toronto) morning show made its debut at the brand new broadcast facility on November 29, 2005, while the network's national programming started broadcasting from the new facility on Friday, December 2, 2005.

Over recent years, The Weather Network has gradually introduced new local weather products including an hourly forecast for the next 12 hours in 2006,[9] long term precipitation forecasts in 2008 and improved satellite and radar maps in 2009. 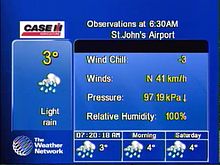 A notable feature of The Weather Network is its local forecast. On cable providers, a report for the nearest weather station to the cable head-end is given, from current conditions all the way to two-week forecasts. The local forecast occurs "every 10 minutes on the tens" (analogous to The Weather Channel's "Local on the 8s"). The segment is well known by frequent viewers for its background music. In January 2010 an online poll was held that allowed viewers to vote for their favorite Local Forecast music, which would play during the morning hours.[10]

On most satellite providers, the segment is a two minute runthrough of weather conditions and 3-Day forecasts in major centres across Canada. Those subscribed to the Bell TV satellite service have the option of viewing a similar local forecast to that of cable providers, using ExpressVu's iTV service.

For residents in southern Ontario, particularly the Greater Toronto Area, forecasts have been changed for the viewing area. At the top and bottom of the hour, one of the presenters gives a 'Regional Forecast' focusing on current conditions around the Toronto listening area, in the style of a local news weathercast. Immediately following is 'Your Long Range Forecast' giving conditions for the next 4 days in southern Ontario. The new programming is a continuation throughout the day of Good Morning Toronto.

Weather news Airs at :12 and :42 minutes after each hour. This is a four- to five-minute newscast highlighting weather stories and environmental issues and includes packaged news reports. The Weather Network news department won the first annual Adrienne Clarkson Diversity Award for network TV. This award is given by the Radio and Television News Director's Association (RTNDA) for the best news reports on a subject of cultural diversity. The Weather Network then won for its 2006 two-part news series on weather and black history. The Weather Network also won a World Medal from the NY Festivals International TV Broadcasting Awards for a 2007 story on a blind woman learning to sail who uses her other senses to determine changes in wind patterns and potential storms. It won the same award again in 2008 for a story on a man and his seeing-eye dog trying to adapt to a harsh New Brunswick winter.

In the Greater Toronto Area, the top and bottom of every hour which airs the National Forecast will be replaced instead with another following similar broadcast of a separate feed with the 'Regional Forecast' and 'Your Long Range Forecast'.

The Weather Network HD is a 1080i high definition simulcast of The Weather Network that debuted on May 30, 2011. MTS was scheduled to be the initial carrier of the service, however due to technical difficulties the channel was never made available to MTS subscribers and it is now looking to launch on MTS by the end of 2011. It is currently available on Cogeco and Rogers Cable.

The HD simulcast for cable and IPTV providers currently do not offer local forecasts unlike the standard definition feed, though its expected to be introduced in early 2012. [11]

WeatherEye is an application developed by The Weather Network that is available for PC and Mac desktops and for most smartphones. The application displays current conditions and forecasts as well as severe weather warnings and alerts.

The network has been criticized for its excessive use of advertising through commercials and forecasts and some weather segments (e.g., hot spots, picnic/barbecue report, etc.) - which has led to less time for detailed forecasts and more time spent on advertising. The same problem also occurs with the U.S. based Weather Channel. In the past, there was little to no advertising. Currently, local forecasts are sponsored using static logos during and after forecasts.

The station has also been criticized for putting more focus over the weather in Southern Ontario than the rest of Canada during its national segments. The 2008 launch of local programming for the Greater Toronto Area had also further limited updated forecasts throughout the rest of Canada.

The network had also been noted for the number of technical difficulties in the early years when the network and its sister station MétéoMédia shared the same satellite transponder and facilities. During a technical difficulty, it often showed a repeated version of an earlier broadcast, or the feed from the opposite language network (either its audio or video, virtually never both).

Main article: List of former presenters on The Weather Network