The South West Africa People's Organization (SWAPO) (German: Südwestafrikanische Volksorganisation, SWAVO, Afrikaans: Suidwes-Afrikaanse Volk-Organisasie, SWAVO) is a political party and former liberation movement in Namibia. It has been the governing party in Namibia since achieving independence in 1990. The party won 75.1% of popular votes and 55 out of 78 seats in the parliamentary election held on November 15, 2004.[3]

Though the organization rejected the term "South West Africa" and insisted on replacing it with "Namibia", the organization's own name—derived from the territory's old name—was already too deeply rooted to be changed. However, the original full name is no longer used and only the acronym remains; the party's official name today[update] is SWAPO Party of Namibia.[4]

During 1962 SWAPO had emerged as the dominant nationalist organization for the Namibian people, co-opting other groups such as the South West Africa National Union (SWANU), and in 1976 the Namibia African People's Democratic Organisation.[8] SWAPO used guerrilla tactics to fight the South African military. On 26 August 1966 the first major clash of the conflict took place, when a unit of the South African Police, supported by South African Air Force, exchanged fire with SWAPO forces. This date is generally regarded as the start of what became known in South Africa as the Border War. In 1972 the United Nations General Assembly recognised SWAPO as the 'sole legitimate representative' of Namibia's people.[9] The Norwegian government began giving aid directly to SWAPO in 1974.[10]

Angola gained its independence on November 11, 1975 following its war for independence. The leftist Popular Movement for the Liberation of Angola (MPLA), supported by Cuba and the Soviet Union, came to power. The MPLA offered SWAPO bases in Angola to launch attacks against the South African military in March 1976.

Controversy within the movement

Various groups have claimed that SWAPO committed serious human rights abuses against suspected spies during the independence struggle. One of which includes the Breaking the Wall of Silence (BWS), which was founded by those detainees to press the SWAPO-government on the issue.[11][12] SWAPO denies serious infractions and claims anything that did happen was in the name of liberation. The stories of the detainees begins with a series of successful South African raids that made the SWAPO leadership believe spies existed in the movement. Hundreds of SWAPO cadres were imprisoned, tortured and interrogated.[13] 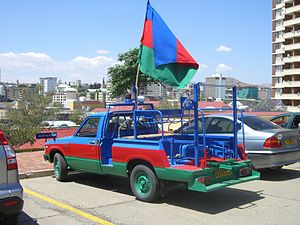 In 2005 the P.E.A.C.E. Centre conducted an extensive study on the situation Namibian ex-fighters and their families fifteen years after Independence. The resultant ebook investigates the post-independence situation of those who fought on both sides of the Namibian Liberation War. Data from this research indicate that ex-fighters still[update] exhibit symptoms of long-term post traumatic stress disorder (PTSD). The findings indicate there is a correlation between the life circumstances of ex-fighters and their lack of resilience to traumatic war experiences, with resiliency being linked to a number of protective factors such as the socio-economic situation of the survivors, their socio-political environment, their social support networks and their cognitive processes.[14]

When Namibia gained its independence in 1990 SWAPO became the dominant political party, with its head, Sam Nujoma, elected as Namibia's first President. Nujoma had the constitution changed so he could run for a third term in 1999, but in 2004 he was replaced as the SWAPO presidential candidate by Hifikepunye Pohamba, who was described as Nujoma's hand-picked successor.[15][16]

Former Prime Minister Hage Geingob was elected to succeed Pohamba as Vice-President at the same congress,[17] and Minister of Justice Pendukeni Iivula-Ithana was elected as Secretary-General, becoming the first woman to hold that position. At the congress, Pohamba was renominated as SWAPO's presidential candidate for the 2009 election.[18] SWAPO is a full member of the Socialist International.[19] and was a member of the Non-Aligned Movement before the independence of Namibia.