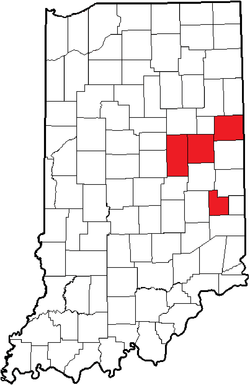 The Olympic Conference within Indiana

The Olympic Conference was an IHSAA-sanctioned conference located within Delaware, Fayette, Jay, and Madison counties. The conference was formed in 1971 by second (and third) high schools from Anderson, Kokomo, and Muncie, and also included suburban Indianapolis schools that grew too large for their conferences at the time. Many suburban schools ended up outgrowing the Olympic as well, with former members now in the Metropolitan and Hoosier Crossroads "superconferences," as the two contain many of the largest schools in the state.

While hosting ten schools in two divisions at its largest, the conference spent the 2000's with five members, then four after Huntington North joined the North Central Conference. With the closing of Anderson Highland after the 2009-2010 school year, as well as the possibility that Muncie Southside will close and be consolidated into Muncie Central in 2011, the conference decided to disband. The still-extant Southside and Jay County are independents, Connersville will join the Eastern Indiana Conference in 2013-14.

Membership at time of folding