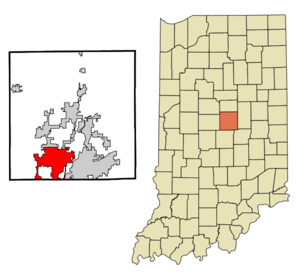 It is considered to be a very affluent (or ) of and is characterized by its many s. Until the late 1800s, the settlement where present day Carmel now sits was called Bethlehem. Today, the plot first established in Bethlehem, located at the intersection of Rangeline Road and Main Street, is marked by a clock tower, donated by the local in 2002.

In 1924, one of the first automatic in the was installed at the intersection of Main Street and Range Line Road. The signal that was installed was the invention of Leslie Haines and is currently in the old train station on the Monon. [cite web | title=History of Carmel, Indiana | publisher=City of Carmel, Indiana | url=http://www.ci.carmel.in.us/government/History%20of%20Carmel.html | accessdate=2007-03-16]

North-South streets are not numbered, and include (West to East) Michigan, Shelborne, Towne, Ditch, Spring Mill, Meridian, Guilford, Range Line, Keystone, Carey, Gray, Hazel Dell, and River. Some of these roads are continuations of corresponding streets within Indianapolis. Towne Road replaces the name Township Line Road at 96th Street, while Westfield Boulevard becomes Rangeline north of 116th Street. Meridian Street () and Keystone Avenue (IN-431) are the major thoroughfares, extending from (within Carmel) in the south and merging just south of 146th Street.

Recent estimates (2005) indicate a substantial growth of population and housing. According to a special census in 2005, the results of which were shown in the Carmel Star, there were an estimated 80,000 people living in Carmel.

There are 13,597 households of which 43.3% have children under the age of 18 living with them, 69.3% were married couples living together, 6.6% had a female householder with no husband present, and 22.3% were non-families. 18.9% of all households were made up of individuals and 6.3% had someone living alone who was 65 years of age or older. The average household size was 2.74 and the average family size was 3.16.

A new water park and mega-fitness center located in Carmel's Central Park opened in 2007. The Outdoor Aqua Park consists of two water slides, a drop slide, a diving board, a lazy river, and a kiddie pool. The fitness center consists of an indoor lap pool, a recreation pool with its own set of water slides, gymnasium, 1/8 mile indoor running track, and the Kids Zone childcare. There is also a dining area.

The is a bicycle trail that is part of the movement. It runs from 10th near downtown Indianapolis through and then crosses into Carmel at 96th Street and ends at 146th Street. In the future, it is planned to run all the way to Sheridan. In January 2006 speed limit signs of 15 to convert|20|mi/h|km/h|-1|abbr=on have been added to sections of the trail north of 96th Street.

Carmel is home to a thriving economy. Several large companies reside in Carmel, such as the National Headquarters for and Pearson Education (formerly ). It is also home to many mid-sized and smaller companies, such as , , Orchard Software Corporation, , Electronic Evolution, Stratis Plastic Pallets, Waterstone Tech and Oxford Financial Group, LTD.

The City of Carmel has controversially annexed large portions of Clay Township in the past and is pressing forward to annex more in the south-west area. In 2004, Carmel City Council first tried to annex an convert|8.3|sqmi|km2|1 area that included more than 3,400 properties. Shortly after that initiative, an organization called No Ordinance for Annexation, or NOAX, worked to challenge the annexation in court. NOAX collected 70% of the homeowners' signatures in a petition allowing for a challenge in court. NOAX and Mayor James Brainard were able to negotiate a deal to delay annexation for three years and provide the maximum tax abatements allowed under Indiana law and road and infrastructure improvements.A second group, Holton's Southwest Clay Community Association, asserted that Carmel shouldn't annex south-west Clay Township. Holton's Southwest Clay Community Association argued that NOAX didn't have authority to strike a deal on behalf of all Clay township homeowners and took the City of Carmel to Court.Due to the ramifications of the decision for other Indiana communities, the case skipped the Indiana Appeals Court and went straight to the Indiana Supreme Court. The Indiana Supreme Court delivered a unanimous 5-0 decision ruling that Carmel can continue with its annexation. Holton's Southwest Clay Community Association recently reported that an appeal is "possible, but not probable." [cite web | title=Court: Carmel can annex Clay Township | publisher=Indianapolis Star | url=http://www.indystar.com/apps/pbcs.dll/article?AID=/20070628/LOCAL/706280481/1155/LOCAL010103 | accessdate=2007-06-28]

The Keystone Avenue Project is a formidable road construction plan by the city of Carmel to make Keystone Avenue, also known as U.S. 431, a signal-free road with roundabout exchanges. This development has been underway since 2008 and is scheduled to be completed in 2010.

The City of Carmel assumed ownership of a stretch of Keystone Avenue within Hamilton County and is currently rebuilding the road with roundabout exchanges onto major arteries. On September 6, 2007, the State of Indiana and the Indiana Department of Transportation came to an agreement to give Carmel control of State Road 431, known as Keystone Avenue, and $90 million to reconstruct the intersections of 96th Street to U.S. 31. [cite web | title=Carmel unveils final plans for Keystone reconstruction project | publisher=Noblesville Daily Times | url=http://www.county29.net/cms2/index.php?option=com_content&task=view&id=11924&Itemid=230 | accessdate=2008-08-18]

Carmel Mayor Jim Brainard’s plan for Keystone Avenue is threefold; 1) aimed at making traffic flow more smoothly down the road, 2) make cross streets move more efficiently and 3) designed to make Carmel safer and more walkable. As the construction continues into 2010, Keystone will have above-ground roundabout exchanges at 106th, 116th, 126th, 131st and 136th Streets, as well as Carmel Drive, located between 116th and 126th. [cite web | title=Keystone Avenue Frequently Asked Questions | publisher=Project CarmelLink | url=http://www.carmellink.org/images/KeystoneFAQ.pdf | accessdate=2008-08-18] Compared to the Indiana Department of Transportation’s (INDOT) plan which called for removing 13 structures, including homes and churches, Brainard’s and Carmel’s plan will affect only one business building. INDOT’s plan utilized circular roundabouts, while the city’s plan makes use of a dumbbell shape, which will use less space. [cite web | title=Carmel Roundabout Renderings Released | publisher=The Urbanophile | url=http://theurbanophile.blogspot.com/2008/02/carmel-roundabout-renderings-release.html | accessdate=2008-08-18] The project makes Keystone Avenue a free flowing, signal-free road from 96th Street to U.S. 31. Construction at the 106th and 126th sites began in the spring of 2008, and construction for 136th is slated to begin in late 2008 or early 2009. After these sites have been completed, 116th Street and Carmel Drive will be under construction in mid 2009 followed by 131st in mid 2010. [cite web | title=Carmel to Assume Ownership of Keystone Avenue; Democrats Cite Favoritism | publisher=Inside INdiana Business | url=http://www.insideindianabusiness.com/newsitem.asp?ID=25314 | accessdate=2008-08-18]

Throughout the project, the city will keep two lanes open in each direction. As of August 2008, only the east sides of the intersections have begun construction with crews at 106th and 126th breaking up the old pavement in order to lay piping, such as water and gas lines, as well as sewers. [cite web | title=City of Carmel, Indiana | publisher=City of Carmel, Indiana | url=http://www.ci.carmel.in.us/ | accessdate=2008-08-18]

While some residents see this project as much needed, others believe the project is unnecessary and a hindrance to schedules. Proponents of the Keystone project have wanted the road to be a signal-free street within Carmel to make traffic flow easier. Opponents say that the three years of construction is too much of a hassle and are dissatisfied with the plan to close 116th Street and Carmel Drive at the same time, thus blocking the shopping center of Merchant’s Square. Supporters of the Keystone project cited safety as another reason this development needs to be done. Supporters agree that construction sites make drivers more aware of speed limits, along with the increased number of policemen catching speeders. Also, the lanes of the replacement road are narrower compared to the older lanes, forcing drivers to maintain concentrate on the road to avoid accidents. Rivals of the project state that construction zones are more apt to have speeders because of the slower speed limit, which can lead to more accidents and more money spent fixing a road that was not broken. With the ongoing construction, travel time has increased by an average of 15 minutes.

The Carmel City Center is a $300 million dollar complex being built in downtown Carmel. The City Center will play host to residences, shops and dining, office space and recreational use. Started in 2007, the project will be completed in 2010, opening the doors to everything this building has to offer.

Currently under construction is the Carmel City Center, a multipurpose building project in downtown Carmel. The project is costing $300 million dollars, and developing more than 2.3 million square feet of space to use for residences, retail shops and dining, office space, an amphitheater and an outdoor performance arts theatre. [cite web | title=Frequently Asked Questions | publisher=Carmel City Center | url=http://www.carmelcitycenter.com/files/Q&A.pdf | accessdate=2008-08-18] The City Center project is led by the City of Carmel in affiliation with the Pedcor Company, based in Carmel, IN. The project began construction in 2007 and is slated to finish in early 2010, with a grand opening in mid to late 2010. Businesses and shops will be able to open in the building soon after finishing and residence with leases will be able to move in after the grand opening. [cite web | title=Company History | publisher=PEDCOR Companies | url=http://www.pedcorcompanies.com/index.aspx | accessdate=2008-08-18]

Opponents of the Carmel City Center state that the building is overpriced and unnecessary. Current estimates put the cost of maintaining the building at two million dollars annually, or 3% of the city’s budget. They also state they want the money used on something other than new construction for the expanding city and that the City Center would complete with the Arts & Design District. Proponents state that the construction is giving people jobs and it will attract more business and residents.