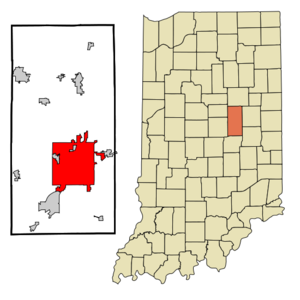 Anderson is a city in Madison County, , . The city is the of Madison County.GR|6 It is the principal city of the Anderson, Indiana which encompasses Madison county. As of the 2000 census, the city had a total population of 59,734. Anderson is the headquarters of the and home of Anderson University, which is affiliated with that denomination. Highlights of the city include the historic Paramount Theatre and the Gruenwald Home.

According to some historians, the city is named for Chief William Anderson, whose mother was a (Lenape) and whose father was of Swedish descent. Chief Anderson's Indian name was Kikthawenund (spelled in a variety of ways) meaning "making a noise" or "causing to crack." Others attribute the town name to architect and planner Adam E. Anderson, an early settler from , OH who laid out and built on the first two streets in town.

Prior to the organization of Madison County, entered the land upon which Anderson is located. Conner later sold the ground to John and Sarah Berry, who donated 32 (129,000 m²) of their land to Madison County on the condition that the county seat would be moved from Pendleton to Anderson. John Berry laid out the first plat of Anderson on , . In 1828 the seat of justice was moved from Pendleton to Anderson.

Introduction of internal improvements caused a growth in the population in 1837. In December, 1838, Anderson was incorporated as a town with 350 inhabitants. The Central Canal, a branch of the was planned to come through Anderson. Work continued on the canal during 1838 and the beginning of 1839, but work on the canal was soon suspended by the state. The town again became a sleepy village until 1849 when it was incorporated a second time as a town. Many new commercial ventures located around the Courthouse Square.

This incorporation was short-lived and Anderson once again went back to village status in 1852. However, with the completion of the Indianapolis Bellefontaine Railroad, as well as their station in 1852, Anderson burst to life. The third incorporation of Anderson as a town occurred on , . The population continued to increase. On , , with a population was nearly 1,300 people, Anderson was incorporated as a city.

Between 1853 and the late 1800s, twenty industries of various sizes located there. On , , was discovered in Anderson. With this discovery new businesses that could use , such as glass-making, moved to the city. Anderson grew to such proportions that a Cincinnati newspaper editor labeled the city "The Pittsburgh on White River." Other appellations were "Queen City of the Gas Belt" and (because of the vulcanizing and the rubber tire manufacturing business) "Puncture Proof City."

The year 1912 spelled disaster for Anderson: the natural gas ran out, and several factories moved out. The whole city slowed down. The Commercial Club (formed on , ) was the forerunner of the present . This club persuaded the Remy brothers to stay in Anderson and others to locate there. For decades, Delco Remy and Guide Lamp (later Fisher Guide) were the top two employers in the city. From 1913 through the 1950s, the Ward-Stilson Company was one of the country's largest producers of uniforms, regalia, furniture and props for the , the and dozens of other U.S. .

The Church of God of Anderson located its world headquarters in Anderson in 1905. Anderson Bible School was opened in 1917, and this was separated from Gospel Trumpet (now known as Warner Press) in 1925. At the same time, it became known as Anderson Bible School and Seminary. In 1925, the name was changed to Anderson College and then to in 1988.

Among the major industries in Anderson are Anderson Tool and Engineering, Barber Manufacturing, Prairie Farms Dairy, , and Warner Press. In 2007, corporation opened a large factory in Anderson, with much fanfare, holding a large celebration, with free samples of an array of Nestlé products. Also in 2007, Anderson was ranked [http://www.forbes.com/lists/2007/5/07bestplaces_Anderson-IN_INAnd.html #98] in the "" List for 100 Best Places for Businesses among Smaller U.S. Metro areas.