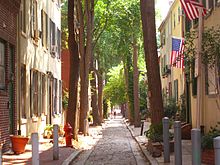 A view of Quince Street, a narrow cobblestone road, as seen from Locust Street. While not inside the bounds of Old City but within the Washington Square West neighborhood to the southwest, this view is representative of many of the small side streets in the area. 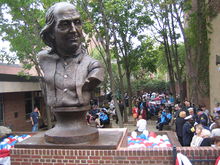 A luncheon in Girard Fountain Park after the Oct. 5, 2007, dedication of Keys To Community, a nine-foot bronze bust of Benjamin Franklin by sculptor James Peniston.

Old City (sometimes spelled "Olde City") is a neighborhood in Center City, Philadelphia, Pennsylvania, United States, in the area near e Delaware River where William Penn and the Quakers first settled. To tourists, it is best known as the site of Independence Hall and its encompassing Independence National Historical Park, Elfreth's Alley, the Betsy Ross House, and many of Philadelphia's other historic sites.

The Old City District occupies several blocks between Front and Sixth Streets, bounded by Vine Street to the north and Walnut Street to the south.[1] The Philadelphia Almanac and Citizens' Manual gives a larger set of boundaries to the Old City area, defined as the area within Spring Garden Street, 4th Street, the Delaware River, and Walnut Street. The Old City Redevelopment Area is bound by Vine Street, the Delaware River, Lombard Street and 7th Street.[2]

The Old City Historic District was added to the National Register of Historic Places in 1972.

It is one of the city's popular nightlife destinations, with many lounges, dive bars, and quality restaurants mostly along the three blocks from 3rd and Market streets to Front and Chestnut streets. The popular monthly First Friday event features open houses by many neighborhood art/design galleries and clothing boutiques. The 3rd Street Corridor, between Market Street and Vine Street, is home to many locally owned independent businesses. These art, design and fashion ventures make Old City a sought after destination for culture and commerce enjoyed locally, nationally and internationally. Landmark Theatres operates three Ritz movie theaters in the area, specializing in art films.

Old City children are assigned to schools in the School District of Philadelphia.

Residents are zoned to the General George A. McCall School for grades Kindergarten through 8.[9] and Furness High School for high school[10].

The Free Library of Philadelphia operates the Independence Branch at 18 South 7th Street.[11]