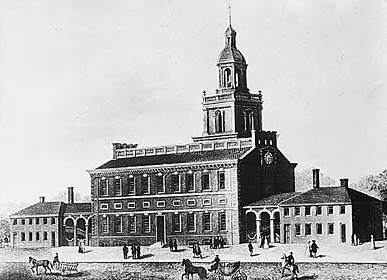 caption = Exterior view of Independence Hall (circa 1770s)
locator_x =
locator_y =
location = , , U.S.
nearest_city =
lat_degrees = 39
lat_minutes = 56
lat_seconds = 56
lat_direction = N
long_degrees = 75
long_minutes = 9
long_seconds = 0
long_direction = W
area =
established = 1753
visitation_num = 645,564
visitation_year = 2005 [http://www.nps.gov/inde/management-documents.htm]
governing_body = Independence Hall is a U.S. located inside , on Chestnut Street between 5th and 6th Streets. Known primarily as the location where the Declaration of Independence was debated and adopted, the building was completed in 1753 as the Pennsylvania State House for the . It became the principal meeting place of the from 1775 to 1783. The and were both signed at Independence Hall. The building is now part of the larger and listed as a World Heritage Site. __TOC__Independence Hall is a red brick building, built between 1732 and 1753, designed in the Georgian style by and Andrew Hamilton, and built by Woolley. Its building was commissioned by the Pennsylvania colonial legislature and it was initially inhabited by the colonial government of Pennsylvania as their State House. Two smaller buildings adjoin Independence Hall: Old City Hall to the east, and to the west. These three buildings are together on a known as Independence Square, along with Philosophical Hall, the original home of the .

The steeple of Independence Hall was the original home of the "" and today it holds a "Centennial Bell" that was created for the United States in 1876. The original Liberty Bell, with its distinctive crack, is now on display across the street in the Liberty Bell Center. In 1976 Queen Elizabeth II of Great Britain visited Philadelphia and presented a gift to the American people of a replica "Bicentennial Bell", which was cast in the same British foundry as the original. This 1976 bell hangs in the modern bell tower located on 3rd Street near Independence Hall.

From 1775 to 1783, Independence Hall served as the principal meeting place of the , a body of representatives from each of the thirteen British North American colonies. The was approved there on , and the Declaration was read aloud to the public in the area now known as Independence Square. This document unified the colonies in North America who declared themselves independent of the and explained their justifications for doing so. These historic events are celebrated annually with a national holiday for U.S. Independence Day.

On , delegates of the Continental Congress nominated as commander of the in the Assembly Room of Independence Hall. The Congress appointed to be the first Postmaster General of what would later become the on .

In September 1777, arrived to occupy Philadelphia, forcing the Continental Congress to abandon the State House and flee to , where the were approved in November 1777. The Congress returned on , after the end of the British occupation. However, as a result of the , Congress again moved from Philadelphia in June 1783.

In September 1786, commissioners from five states met in the Annapolis Convention to discuss adjustments to the that would improve commerce. They invited state representatives to convene in Philadelphia to discuss improvements to the federal government. After debate, the endorsed the plan to revise the on , . Twelve states, being the exception, accepted this invitation and sent delegates to convene in June 1787 at Independence Hall.

The resolution calling the Convention specified its purpose as proposing amendments to the Articles, but the Convention decided to propose a rewritten Constitution. The voted to keep deliberations secret, and to keep the Hall's windows shut throughout the hot summer. The result was the drafting of a new fundamental government design. On , , the Constitution was completed, and took effect on , , when the new Congress met for the first time in New York's .

Article One, Section Eight, of the United States Constitution granted Congress the authority to create of a federal district to serve as the national capital. Following the ratification of the Constitution, the Congress, while meeting in New York, passed the of 1790, which established the District of Columbia as the new federal capital. However, a representative from Pennsylvania, Robert Morris, did manage to convince Congress to return to Philadelphia while the new permanent capital was being built. As a result, the Residence Act also declared Philadelphia to be the temporary capital for a period of ten years. The Congress moved back into Philadelphia on December 6, 1790 and met at , adjacent to Independence Hall.

In 1948, the building's interior was restored to its original appearance. was established by the 80th U.S. Congress later that year to preserve historical sites associated with the American Revolution. Independence National Historical Park comprises a landscaped area of four city blocks, as well as outlying sites that include: , Carpenters' Hall (meeting place of the ), the site of 's home, the reconstructed (where wrote the Declaration of Independence), City Tavern (center of Revolutionary War activities), restored period residences, and several early banks. The park also holds the Liberty Bell, Franklin's desk, a portrait gallery, gardens, and libraries. A product of extensive documentary research and archaeology by the federal government, the restoration of Independence Hall and other buildings in the park set standards for other and stimulated rejuvenation of old Philadelphia. The site, administered by the , is listed as a World Heritage Site by (joining only three other U.S. man-made monuments still in use, the others being the , Pueblo de Taos, and the combined site of the and ).

Following the , as part of a national effort to safeguard historical monuments by the , pedestrian traffic around Independence Square and part of was restricted by temporary bicycle barriers and park rangers. In 2006, the National Park Service proposed installing a seven-foot security fence around Independence Hall and bisecting Independence Square, a plan that met with opposition from Philadelphia city officials, Pennsylvania Governor , and Senator . [ [http://travel.nytimes.com/2006/08/09/us/09fence.html?n=Top%2FReference%2FTimes%20Topics%2FPeople%2FS%2FStreet%2C%20John%20F ] New York Times] As of January 2007, the National Park Service plan was revised to eliminate the fence in favor of movable bollards and chains, and also to remove at least some of the temporary barriers to pedestrians and visitors. [ [http://www.kyw1060.com/pages/111903.php?contentType=4&contentId=227404 ] kyw1060.com] [ [http://hosted.ap.org/dynamic/stories/P/PA_BRF_PHILADELPHIA_INDEPENDENCE_HALL_SECURITY_PAOL-?SITE=PAPPA&SECTION=HOME&TEMPLATE=DEFAULT ] kyw1060.com]