Tehri Garhwal (Hindi: टिहरी गढ़वाल) is one of the largest districts in the hill state of Uttarakhand, India. Its administrative headquarters is at New Tehri. The district has a population of 604,747 (2001 census), a 16.15% increase over the previous decade. It is surrounded by Rudraprayag District in the east, Dehradun District in the west, Uttarkashi District in the north, and Pauri Garhwal District in the south.

The name Tehri has been derived from Trihari, signifying a place that washes away the three types of sins - sins born out of Mansa, Vacha and Karmana or thought, word and deed, respectively. Garh in Hindi means fort.

Prior to 888 AD, the region was divided into 52 garhs which were ruled by independent kings. These garhs were brought into one province by Kanakpal, the prince of Malwa. Kanakpal, on his visit to Badrinath, had met the then mightiest king Bhanu Pratap who later married his only daughter to the prince and handed over his kingdom to him. Kanakpal and his descendants gradually conquered all the garhs and ruled the whole of Garhwal Kingdom for the next 915 years, up to 1803.

Tehri Garhwal [1] or Garhwal Kingdom, was a princely state, ruled by the Panwar (Shah) dynasty. Later, it became a part of the Punjab Hill States Agency of British India, which consists of the present day Tehri Garhwal District and most of the Uttarkashi district. In 1901, it had an area of about 4,180 m²/11,655 km² and a population of 268,885. The ruler was given the title of raja, but after 1913, he was honoured with the title of maharaja. The ruler was entitled to salutes of 11 guns and had a privy purse of rupees 300. The princely state acceded to India on 1 August 1949.

In 1803, the Gorkhas took over Garhwal.[2] The Gorkha warriors Subba Amar Singh, Hastidal Chautariya, Bamshah Chautariya and Ranjor Thapa commanded a huge army in the crusade against King Pradyumna Shah and his sons Kuwar Parakrama Shah and Kuwar Pritam Shah. A 12,000-strong army fought with the Gorkhas at Khurhbure where the king was killed. Gradually, the Gorkhas captured Dehradun, Saharanpur, Kangada and Shimla and later on extended their kingdom up to Kangara. 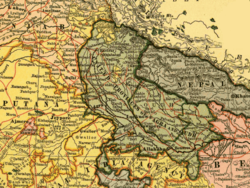 1903 map of United Provinces showing the boundaries of Garhwal Kingdom

From 1787 to 1812, the Gorkhas captured nearly 200 villages which were under the control of the East India Company. The British argued with the king of Nepal but to no avail. Finally, the Gurkha War (Anglo-Nepalese War) began in 1814, when an army of 8,000 under Major General Marley attacked Kathmandu. Four thousand soldiers under Major General Wood started an operation from Gorakhpur and 3,500 soldiers attempted to take over Dehradun under Major General Zileswy, where a Gorkha army of 300–400 was led by Balbhadra Thapa. The Gorkhas fought a fierce battle and crushed the British, who were reinforced by soldiers and cannons. Finally, the British army captured Dehradun on 30 November 1814.

The British Army then moved towards Kumaon. After a fierce battle, the Gorkha commanders Hastidal and Jayrakha were killed at Vinayathal. The war ended with the Sugauli Treaty, signed on 2 December 1815 and ratified on 4 March 1816 by Gorkha supreme commander Bamshah and thus, British rule started in the hills. The East India Company then merged Kumaon, Dehradun and east Garhwal into British Empire while west Garhwal was given to Sudarshan Shah which then became known as Tehri Riyasat.

King Sudarshan Shah established his capital at Tehri town and afterwards his successors Pratap Shah, Kirti Shah and Narendra Shah established their capital at Pratap Nagar, Kirtinagar and Narendra Nagar, respectively. Their dynasty ruled over this region from 1815 to 1949. During the Quit India Movement people of this region actively worked for the independence of the country. Ultimately, when the country was declared independent in 1947, the inhabitants of Tehri Riyasat (Tehri State) started their movement to free themselves from the clutches of the maharaja.

Due to this movement, the situation became out of his control and it was difficult for him to rule over the region. Consequently the 60th king of Pawar Vansh, Manvendra Shah, accepted the sovereignty of the Indian government. Thus, in August 1949, Tehri Riyasat was merged into Uttar Pradesh and was given the status of a new district, the Rudraprayag district.[3] Subsequently, on 24 February 1960, the state government separated its one tehsil which was given the status of a separate district named Uttarkashi.

In 2006 the Ministry of Panchayati Raj named Tehri Garhwal one of the country's 250 most backward districts (out of a total of 640).[4] It is one of the three districts in Uttaranchal currently receiving funds from the Backward Regions Grant Fund Programme (BRGF).[4]

The district of Tehri Garhwal is divided into two subdivisions: Kirti Nagar and Tehri-Pratap Nagar. It has seven tehsils, one sub-tehsil, nine blocks, two municipalities and four town area committees. The district covers 76 nyaya panchayats and 928 gram panchayats. It has 1,847 revenue villages and 2,508 clusters.

In the 60s, Tehri Garhwal extended much farther east than it currently does.[9] In 1997, much of the eastern portion of Tehri Garhwal was detached and merged with portions of the Pauri Garhwal district and the Chamoli district to form the Rudraprayag district.