The North American XF-108 Rapier was a proposed long-range, high-speed interceptor aircraft designed by North American Aviation. Initiated to defend the United States from supersonic Soviet bombers, the program, initially called NA-257, was cancelled in 1959 due to a shortage of funds and the Soviet adoption of ballistic missiles as their primary means of nuclear attack. Only one mock-up was constructed. Had it flown, it would have been the heaviest fighter of its era, surpassing the Soviet Tupolev Tu-128.

In the early 1950s, the United States Air Force (USAF) began formulating specifications for an F-102/F-106 replacement. The original requirements called for an aircraft with a top speed of Mach 1.7. A number of companies submitted their proposals, with the winner being North American's XF-108.[2] Revised specifications saw the aircraft's top speed increased to Mach 3, powered by the GE J93 turbojet. Following the program's termination, the fire-control system, incorporating the Hughes GAR-9 missile, was adapted for the Lockheed A-12.[2]

Of the eight interested companies, contracts for preliminary studies were issued to North American Aviation, Lockheed and Northrop on 11 October 1955, five days after the specification's release.[3] Of the paper designs, the North American proposal, dubbed "NA-236", seemed the most promising. The NA-236 shared some similarities with the XF-108, although the most obvious differences were the additions of two finlets at the midspan of the horizontal stabilizers, and canards.[5] Political and budgetary difficulties led to the cancellation of the program on 9 May 1956. After considerable confusion, the program was reinstated on 11 April 1957 with North American awarded a contract for two prototypes. The designation F-108 was issued, also known as "Weapon System 202A". North American's company designation was "NA-257", although it was basically identical to the NA-236. At the time, Air Defense Command anticipated an order for 480 aircraft.[6]

The resulting design went through considerable evolution, owing to both its cutting-edge technology and continual redefinition of the USAF requirements. Early revisions prominently featured canards, with a span of 19 ft 10 in (6.04 m), and a wing of 53.5° sweep.[7] The aircraft in this configuration would have a maximum take-off weight of 99,400 lb (45,088 kg) with a 72,550-feet (22,113 m) operational ceiling.[7] In addition to the F-108's interceptor role, North American proposed it as an escort fighter for its own B-70 Valkyrie supersonic bomber prototype.[8] Commonality between the B-70 bomber and the F-108 included the escape capsule and General Electric YJ93 engines. Another role considered was for the F-108 to be "gap-fillers" for the Distant Early Warning (DEW) system; because of its great speed, the F-108 could have scanned up to 278,000 square miles (720,000 km2) per hour.[9]

From September 1958, substantial engineering and design changes were implemented; however, SAC had lost interest in the escort fighter concept. To accompany the B-70 all the way to its target and back, the F-108 in its initial concept would have, at best, marginal range.[10] On 30 December 1958, YF-108A pre-production aircraft on order were reduced from 31 to 20 test aircraft and the first test flight was delayed from February to April 1961.[11] The eventual design, which was built as a full-sized XF-108 mock-up, was displayed to Air Force officials on 17–20 January 1959.[10] The project was given the name "Rapier" on 15 May 1959, following a contest by the Air Defense Command asking airmen for suggestions.[11]

Even as the XF-108 program was progressing well, there were signs which would ultimately lead to its eventual cancellation. Unconfirmed Soviet bomber threats, the overwhelming trend toward offensive and defensive nuclear missiles in the late 1950s and early 1960s, as well as rising costs, contributed to the termination of the XF-108.[9][12] The cancellation was announced on 23 September.[9] North American continued refining the design through 1960 in hopes that the program might be revived.[13] Despite the extra money and time spent on the Rapier, it was not wholly in vain—the North American A-5 Vigilante supersonic reconnaissance bomber developed for the U.S. Navy retained the fuselage/weapon package and systems design of the Rapier. In many ways the Vigilante could be seen as the successful application of the Rapier design principles in a Mach-2 supersonic design.[14]

Hughes Aircraft would continue development of the advanced fire control system and the GAR-9 missile.[N 1] Development of the F-108 radar and missiles was continued by the USAF and the system was eventually used in the Lockheed YF-12 program.[15] The final configuration for the rear cockpit in the YF-12A looked similar to that of the F-108 since it incorporated the same displays and controls required for the Hughes ASG-18 fire control system.[16]

Artist's impression of F-108 assigned to Elmendorf AFB, Alaska, as an interceptor aircraft

The initial F-108 configuration featured a very large "cranked" delta wing. There were fixed ventral stabilizers on the wings, mounted at mid-span, and a tall all-moving vertical tailfin, supplemented by two ventral stabilizers that extended when the landing gear retracted. Although some earlier versions of the design had had separate tailplanes and later forward canards, both were abandoned in the final design.[17] The large fuselage and wing have two and five fuel tanks, respectively, giving an estimated combat radius of some 1,100 nautical miles (2,000 km).[7] Top speed was estimated at 1,980 miles per hour (3,190 km/h), about Mach 3, at 81,800 feet (24,900 m).[6] The aircraft was powered by two General Electric J93 turbojet engines, also used in North American's XB-70 Valkyrie bomber, in the fuselage.[18]

The F-108 was intended to carry the Hughes AN/ASG-18 radar, the U.S.'s first pulse-Doppler radar set. [19]It was to have look-down/shoot-down capability, but could only track one target at a time. The radar was paired with an infra-red search and tracking (IRST) system on the wing leading edges. The radar was used to guide the Hughes GAR-9 (later redesignated AIM-47) air-to-air missile, three of which would be carried on a rotary launcher in an internal weapons bay.[9] The GAR-9 was a very large, long-range weapon with its own radar set for terminal homing. It was intended to fly at Mach 6, with a range of almost 112 miles (180 km).[20] 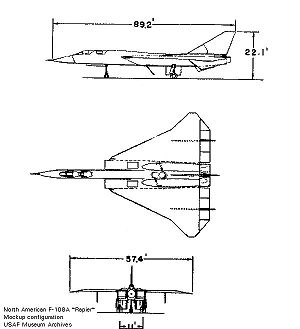 Data from National Museum of the United States Air Force[8]