The Maximum Takeoff Weight (MTOW) or Maximum Takeoff Mass of an aircraft is the maximum weight at which the pilot of the aircraft is allowed to attempt to take off, due to structural or other limits. The analogous term for rockets is Gross Lift-Off Mass, or GLOW. MTOW is usually specified in units of kilograms or pounds, but some aircraft manufacturers also use kilogram-force (kgf) or pound-force (lbF)[1].

MTOW is the heaviest weight at which the aircraft has been shown to meet all the airworthiness requirements applicable to it. MTOW of an aircraft is fixed, and does not vary with altitude or air temperature or the length of the runway to be used for takeoff or landing. A different weight the "maximum permissible takeoff weight", or "regulated takeoff weight", varies according to flap setting, altitude, air temperature, length of runway and other factors. It is different from one takeoff to the next, but can never be higher than the MTOW.

At the MTOW, all aircraft of a type and model must be capable of complying with all these certification requirements. 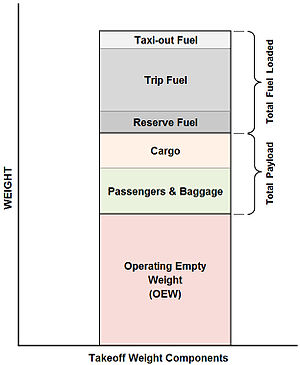 Among large airliners, the same model of aircraft can have more than one MTOW. An airline can choose to have its airliner certified for an increased weight at an additional cost. Some airlines which do not require a high MTOW choose to have a lower MTOW for that particular aircraft to reduce costs (Landing and air traffic control fees being MTOW based [2]).

In many circumstances an aircraft may not be permitted to take off at its MTOW. In these circumstances the maximum weight permitted for takeoff will be determined taking account of the following: