Dumfries, Lochmaben and Lockerbie Railway was a railway in Dumfriesshire, Scotland. It connected Dumfries with Lockerbie. It is now closed.

An act to establish the railway (as the Dumfries, Lochmaben & Lockerby Junction Railway[1]) received royal assent in 1860, and the company started with £85,000 raised by selling 10/- shares,[2] with the option to borrow an additional £28,300. B. & H. Blyth of Edinburgh designed and built the line, and services started on 1 September 1863.[3] It was 14½ miles long,[4] and there were turntables at Lockerbie[1] and Dumfries.[3] On 5 July 1865 the company was absorbed by the Caledonian Railway to give them access to Dumfries and the mineral fields beyond, as part of their trade rivalry with the Glasgow and South Western Railway.[5] The Caledonian also wanted a share of the lucrative ferry traffic going to Ireland via Stranraer.[6] The company proposed to build a line from Lochmaben to Dinwoodie, on the West Coast Main Line several miles to the north of Lockerbie, to make a more direct connection from Dumfries to the north, but nothing came of it.[5]

There were five return passenger journeys a day on the line, and trains stopped at all stations until passenger service ended.[6] The line stagnated under the London, Midland and Scottish Railway after the 1921 Grouping.[1] Passing on to the Scottish Region of British Railways on nationalisation in 1948, it was then closed to regular passenger service by the British Railways Board on 19 May 1952. A few special passenger trains used the line in the early 1960s,[6] and the line was closed to all traffic on 18 April 1966.[3]

The company's trainshed still stands at Lockerbie railway station, although it has lost its roof and the trackbed has been filled in. The goods terminus was known as Dumfries St Mary's and is now St Mary's Industrial Estate.[3] The line from Dumfries to Locharbriggs is now a cycle path,[7] and the trackbed is still visible near Amisfield[8] and Lochmaben,[9] where the Railway Inn survives near the site of the former station.[3] 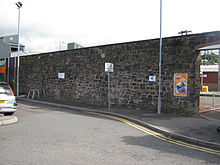 The remains of the Dumfries, Lochmaben and Lockerbie Railway's trainshed at Lockerbie

The line came off Castle Douglas and Dumfries Railway metals, crossed the Glasgow, Dumfries and Carlisle Railway north of Dumfries (where there was a branch to the goods shed), then passed through Locharbriggs, Amisfield, Shieldhill and Lochmaben before joining the Caledonian's main line just north of Lockerbie.

On 14 May 1883, at 11:35 pm, a train from Stranraer passed a signal and collided at low speed with an empty goods train on the main line north of Lockerbie. Some of the goods train's wagons derailed and a southbound mainline express collided with them, being derailed onto the station platform. Seven people were killed, including the driver and fireman of the express. The guard from the express ran down the line to warn another approaching train of the accident and prevented a further collision. There were 300 injuries. The driver of the first train, the Lockerbie station master and the local inspection regime were all criticised in the subsequent report on the crash.[10]

Connections to other railways