Strathspey Railway is an historic railway in Scotland that ran from Boat of Garten to Dufftown.

The line was opened on 1 July 1863 between Dufftown and Abernethy (later Nethy Bridge). It was extended to meet up with the Inverness and Perth Junction Railway (later the Highland Railway) at Boat of Garten on 1 August 1866. The Strathspey Railway actually met the Highland line at Tullochgorum, some 3 miles north of Boat of Garten, but the two lines ran parallel until reaching Boat, the physical junction being to the south of Boat of Garten station. The same year, 1866, saw the Strathspey Railway become part of the larger Great North of Scotland Railway (GNSR).

The railway served the numerous distilleries that operated in the Spey Valley, many of these distilleries having their own small tank engines, or 'pugs' as they were known.

In 1923, the railway became part of the London & North Eastern Railway (LNER) and through passenger services were advertised from Boat of Garten to the South via Aberdeen. The line became part of British Railways in 1948 and many cost-saving measures were considered, including the introduction of diesel rail buses in the late 1950s.

The Strathspey line closed to passengers on 11 October 1965, the same date as the closure of the Highland line between Aviemore and Forres. Grantown on Spey, which had previously been served by two separate stations, was now left without any rail connection. 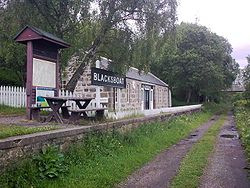 Goods traffic lingered on for a further three years, mostly the whisky trains, until this too ceased on 4 November 1968. The track was lifted the following year. The short section between Aberlour and Dufftown remained open for goods traffic until the end of 1971.

Although the two stations at either end of the line are open, serving two heritage railways, (the Keith and Dufftown Railway at Dufftown and the (second) Strathspey Railway at Boat of Garten on the Highland Railway's Aviemore to Forres route), no part of the original Strathspey Railway has been preserved. However, the section between Ballindalloch and Craigellachie has now been converted into part of the Speyside Way, which runs between Ballindalloch and Spey Bay.

Many of the railway's attractive stone-built station buildings still exist today; some have been converted for private usage, while others are near derelict. The former station building at Aberlour has been converted into a tearoom and visitor centre. Two of the three bridges over the Spey still survive: the joint road/rail cast-iron arch bridge at Carron and the impressive lattice girder bridge at Ballindalloch, the latter is now a Category A listed building.

The line is closed in its entirety between Boat of Garten and Dufftown.