Since these organizations are virtually the oldest kind of student organization in America, where they have survived, they are seen as ancient institutions. One author from Georgia acknowledged that fact (by parody) in discussing his own society: "The origin of the Washington Society dates back to the glory days of the Jurassic Period of the Mesozoic Era. It was during this time that great plant-eating dinosaurs roamed the Earth, feeding on lush growths of ferns and palm-like cycads and ennettitaleans. Meanwhile, smaller but vicious carnivores stalked the great herbivores. The oceans were full of fish, squid, and coiled ammonites, plus great ichthyosaurs and the long-necked plesiosaurs. Vertebrates first took to the air, like the mighty pterosaurs and the first true birds. The supercontinent Pangaea began to break up and disperse itself across the Earth's surface, sending a big chunk of land to the very spot where Thomas Jefferson's decomposed old ass lies buried today. And it is on this same chunk of land, a few miles away, that Mr. Jefferson's University sits, home to the Washington Literary Society and Debating Union.[2]

Literary and other activities

Most literary societies' literary activity consisted of formal debates on topical issues of the day, but literary activity could include original essays, poetry, music, et c. As a part of their literary work, many also collected and maintained their own libraries for the use of the society's members. "[C]ollege societies were the training grounds for men in public affairs in the nineteenth century." [1]

The societies could fulfill this function because they were independent organizations, and entirely student run activities. "[T]he societies were virtually little republics, with their own laws and a democratically elected student administration."[1]

Topics could include Classical history, religion, ethics, politics, and current events. Controversial topics not covered in the official curriculum were often the most popular. Studies have been done, for example, finding an increasing discussion of slavery at literary society meetings through the 1850s. 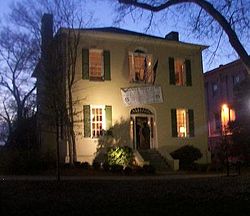 Demosthenian Hall at the University of Georgia, built in 1824

Since every college literary society saw itself as complementing the classical curriculum with the knowledge of current events, the societies also had libraries. "At a number of Northern colleges...the society libraries were larger than the college libraries. The society libraries were also high in quality, as shown by their printed catalogs... Rivalry between the two societies at each college extended to their libraries; each tried to have a larger library than the other."[1] A number of societies, especially in the South, would build separate buildings for the societies and their libraries.[1] On the austere college campus of two centuries ago, "the only fairly comfortable and attractive places were the rooms of the literary societies. Their members,... raised money for rugs, draperies, and comfortable, even luxurious, furniture." [1]

In relation to the campus

Membership in these societies was not only open to all the students in the college, but in many cases membership was all but required. At the opening of University of South Carolina virtually all students were members of the Philomathic Society which was soon divided by lot into the Clariosophic and Euphradian societies. In some cases, intense recruitment battles would ensue over new students, and to avoid problems some colleges chose to assign incoming students to one or the other literary society. This pattern was followed, for example, at Dartmouth, where the faculty imposed rule was "The students of College shall be assigned according to the odd or even places which their names shall hold on an alphabetical list of the members of each successive class..."[3] Having two societies on a campus encouraged competition, and a thriving society would have interesting enough meetings to attract full attendance from its membership and perhaps even people from the community. These societies met publicly, sometimes in large lecture rooms, and in most instances the literary exercises would consist of a debate, but could also include speeches, poetry readings, and other literary work.

In the 1830s and 1840s, students began to organize private literary societies for smaller groups, and these more intimate associations quickly developed into wholly secret associations. These groups are the earliest college fraternities. Kappa Alpha, Sigma Phi, Delta Phi, Mystical Seven, Alpha Delta Phi, Psi Upsilon, and Delta Kappa Epsilon, in fact, virtually all the pre-Civil War college fraternities were either first organized as literary societies or derived from factions split off of literary societies. These new organizations held meetings and were organized on identical lines to the large literary societies. Soon, the existence of these smaller private Greek letter organizations undermined the large Latin literary societies. Competition from athletics and other entertainments also took a toll, so that many dissolved or existed in name only by the 1880s. A literary society almost always provided its members with an extensive library, either available to members only, or to the campus at large. When the societies dissolved, their libraries were transferred to the college libraries, and in many colleges the acquisition of the literary societies' libraries was a significant change in their collection, usually broadening the colleges libraries' scope into popular literature, but often also adding important and rare works.

Although literary societies had Latin names, and fraternities had Greek names reduced to initials, this is not always the case, however; Phi Phi Society at Kenyon and the Phi Kappa at Georgia are examples of large literary societies with Greek names. The Clariosophic and Euphradian societies at South Carolina both had Greek letter aliases, Mu Sigma Phi and Phi Alpha Epsilon, respectively, which appeared on their seals, but which were not used in normal conversation or writing.

The Philomathean Society (1813) of the University of Pennsylvania is the oldest continuously-existing literary society in the United States. The University of Georgia hosts two literary societies (both of which were temporarily disbanded during the Civil War and the subsequent Union occupation): the Demosthenian Literary Society, founded in 1803, and the Phi Kappa Literary Society, founded in 1820 and dormant from the 1970s until its official reestablishment in 1991. Similarly, the Philolexian Society of Columbia University, established in 1802, operated more or less continuously until the early 1950s when it sputtered out and, except for a brief revival in the early 1960s, was not revived until 1985.