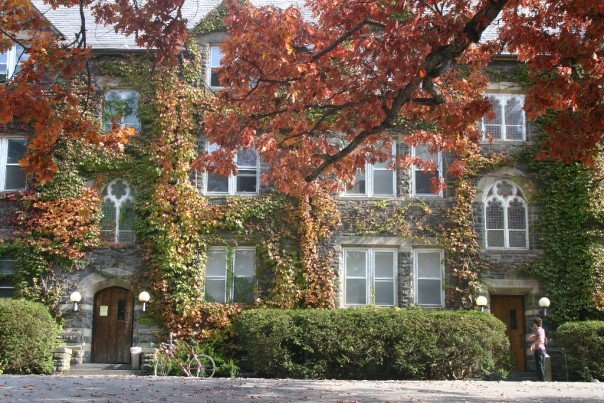 Bard has a 600-acre (2.4-km²) campus in , near the town of Red Hook, overlooking the and , within the , a . The hamlet of Annandale-on-Hudson has no downtown center and consists of the college and nine other non-associated houses. The village is neighbored by the villages of Red Hook and Tivoli, and is across the from the small cities of Kingston and Saugerties. Shuttles run between the college and the two villages.

The college was originally founded under the name St. Stephen's, in association with the Episcopal church of , and changed its name to Bard in 1934 in honor of its founder, . While the college remains affiliated with the church, it pursues a far more secular mission today. Between 1928 and 1944, Bard/St. Stephen's operated as an undergraduate school of . Bard/St. Stephen's ties with Columbia were severed when Bard became a fully coeducational college. [http://www.bard.edu/about/history/]

By the 1930s Bard had become atypical among US colleges in that it had begun to place a heavy academic emphasis on the performing and fine arts. During that time, a substantive examination period was introduced for students in their second year, as well as what the dean at the time called the "final demonstration." These two periods would come to be known as Moderation and Senior Project, respectively (see below). [http://www.bard.edu/about/history/]

During the 1940s, Bard provided a haven for intellectual refugees fleeing Europe. These included , the political theorist, , the precisionist painter; , the political editor of the ; the violinist ; the noted psychologist Werner Wolff; and the philosopher . [http://www.bard.edu/about/history/]

In 1975, after serving as the youngest college president in history at , was elected president of Bard. He is generally credited with reviving the academic and cultural prestige of the College, having overseen the acquisition of , the construction of a -designed performing arts center, and the creation of a large number of other associated academic institutions.

For the class of 2012, 25% of applicants were accepted, while the median SAT and ACT scores for matriculating students were 1330 (math plus verbal) and 30, respectively. Fifty-four percent of matriculating students ranked in the top 10% of their high school class out of 44% of students who reported their ranking. [http://www.bard.edu/admission/profile/] [http://apps.collegeboard.com/search/CollegeDetail.jsp?collegeId=1426&profileId=0] The Princeton Review rated Bard a 95 out of 99 in its selectivity rating, [http://www.princetonreview.com/college/research/profiles/admissions.asp?listing=1024046&ltid=1&intbucketid=] and "US News & World Report" categorized Bard as "most selective." [http://www.usnews.com/usnews/edu/college/directory/brief/drglance_2671_brief.php] The class of 2011 represent 38 states and 46 different countries. [http://www.bard.edu/admission/profile/]

Bard has developed several innovative graduate programs and research institutes, including the , the , the , the , the in Manhattan, the Master of Arts in Teaching Program (MAT), the , and the in . The college's was designed by acclaimed architect , and was completed in the spring of 2003.

Over 60 student clubs are financed through Bard's Convocation Fund, which is distributed once a semester by an elected student body and ratified during a rowdy public forum in the dining commons.

Bard students publish two newspapers, the Bard Observer and the Bard Free Press. In 2003, the Free Press won Best Campus Publication in SPIN Magazine's first annual Campus Awards. [http://freepress.bard.edu/history.html] Literary magazines include the semiannual Verse Noire, the annual Bard Papers, and Sui Generis, a journal of translations and of original poetry in languages other than English. The Bard Journal of the Social Sciences, which publishes undergraduate work, is also produced by students on campus.

Other prominent student groups include the International Students Organization and other cultural organizations, the Bard Film Committee, the Bard Democrats, and station WXBC.

The Bard Athletics department offers varsity sports in basketball, cross country, soccer, tennis, volleyball, and squash (men), and joined the Skyline Conference, effective 2007-2008. One of the more popular sports on campus is rugby. In the spring of 2006, joined the men's side, Bard Rugby Football Club, as an official team. The men's basketball team gained some notoriety when they were beaten by in 2007; it was Caltech's first win against an NCAA Division III opponent since 1996, and stopped a streak of 207 consecutive losses. [http://www.npr.org/templates/story/story.php?storyId=6740182] Bard player Michael Mandlin was named Division III Player of the Year by the multicampus publication The Outside World. [http://www.raptormania.com/poy.html]

Bard has a strong independent music scene considering its isolation and size, and the college's Old Gym was once a popular location for concerts and parties in the 80s, 90s, and early 00s. In 2004, the Old Gym was shut down and in spring 2006 transformed into a student-run theater. Many activities that once took place there now occur in the smaller [http://student.bard.edu/clubs/smog/ SMOG] building, an autonomous student space. Student-run theater is also popular: dozens of student directed and written productions are put on each semester and a 24 Hour Theater Festival is held at least once a year.

Currently, most on-campus parties are held in the dining commons or at Ward Manor, a 19th century Hudson mansion now used as a dormitory. Furthermore, a social scene for students can be found in the nearby town of Tivoli.

All first-year students must attend the Language and Thinking (L&T) program, an intensive, writing-centered introduction to the liberal arts, for the three weeks preceding their first semester. Orientation also takes place during this time.

As first-years, all students take the "First-Year Seminar", which begins in the fall, and spans thinkers from to . The course ends in the spring, spanning to . There are nearly thirty sections of the course each semester, taught by a wide variety of professors, including President Botstein and other members of the administration.

Another mandatory process of the university is "moderation." Moderation typically takes place in the fourth or fifth semester, as a way of choosing a major. Conditions vary from department to department: all require the preparation of two short papers, one on the moderand's past work in the major subject and one on their plans for the future; most require the completion of a certain set or a certain number of courses; some have additional requirements, such as a concert or recital, the submission of a seminar paper, or the production of a film. To moderate, the student presents whatever work is required to a moderation board of three professors, and is subsequently interviewed, examined, and critiqued.

The "capstone" of the Bard undergraduate experience is the Senior Project. As with moderation, this project takes different forms in different departments. Most students in the divisions of Languages and Literature and of Social Sciences write a paper of around eighty pages, which is then, as with work for moderation, critiqued by a board of three professors. Arts students must organize a series of concerts, recitals, or shows, or produce substantial creative work; math and science students, as well as some social science students, undertake research projects.

The college also offers graduate degrees at the , the Bard Graduate Center in Manhattan, the Center for Curatorial Studies, the , the (also in Manhattan), the Milton Avery Graduate School of the Arts, and in the Master of Arts in Teaching Program.

Bard is widely regarded as one of the most left-leaning colleges in the country. In 2005, the ranked it as the second-most liberal college in the United States, declaring that Bard "puts the 'liberal' in 'liberal arts.'" [http://encarta.msn.com/college_article_LiberalColleges/Top_10_Politically_Liberal_Colleges.html]

In 2003, Bard Professor drew criticism from controversial conservative columnist for his book, "", in which he compared anti-communism to a psychiatric disorder. Coulter accused Kovel of holding a "lunatic psychological theory" and counted Bard among the colleges and universities that "have become a Safe Streets program for traitors and lunatics." [http://www.jewishworldreview.com/cols/coulter071003.asp]

* Bard is described as "My Old School" in the song of the same name in which remembers "when you put me on The Wolverine up to Annandale." Some inaccurately perceive the song to associate Fagen with another school &mdash; the &mdash; because there is a well known lyric in it where Fagen croons: "wo-oh, William and Mary won't do." Fagen sings he will only return to Bard when "California tumbles into the sea". He returned in 1985 as a guest speaker during commencement that year, accepting an Honorary Doctorate degree from the college.
* In the "" comics, 's father John is mentioned as being a professor of history at Bard. The hamlet of Annandale-On-Hudson is known as Jean Grey's hometown and where her parents have resided for the entire duration of the series. According to the comics, avier is also an alum of Bard, where Professor Grey taught him history. Jean Grey's gravesite was at the chapel, following her supposed death after the Dark Phoenix saga. The character of is reportedly named after the famed Bard poetry professor.
*In the television series "", Jennifer Melfi's son, Jason, attends Bard.
* Mary McCarthy's novel, "", is ostensibly set in Bard during the late forties, when she taught there.
* In 's novel "" the narrator Louis Sacchetti is described as having attended Bard.
* Charles Rosen's book "" chronicles the author's experience coaching basketball at Bard College in 1979-80.
* In an episode of Comedy Central's "The Daily Show with Jon Stewart", Stewart made a joke about a hypothetical left-wing blog, the address of which ended in "bardcollege.edu".
* Bard College President Leon Botstein appeared on Comedy Central's "" on , .
*The [http://www.bard.edu/bpi Bard Prison Initiative] was featured on "" on April 15, 2007. [http://www.cbsnews.com/stories/2007/04/15/60minutes/main2685164.shtml]