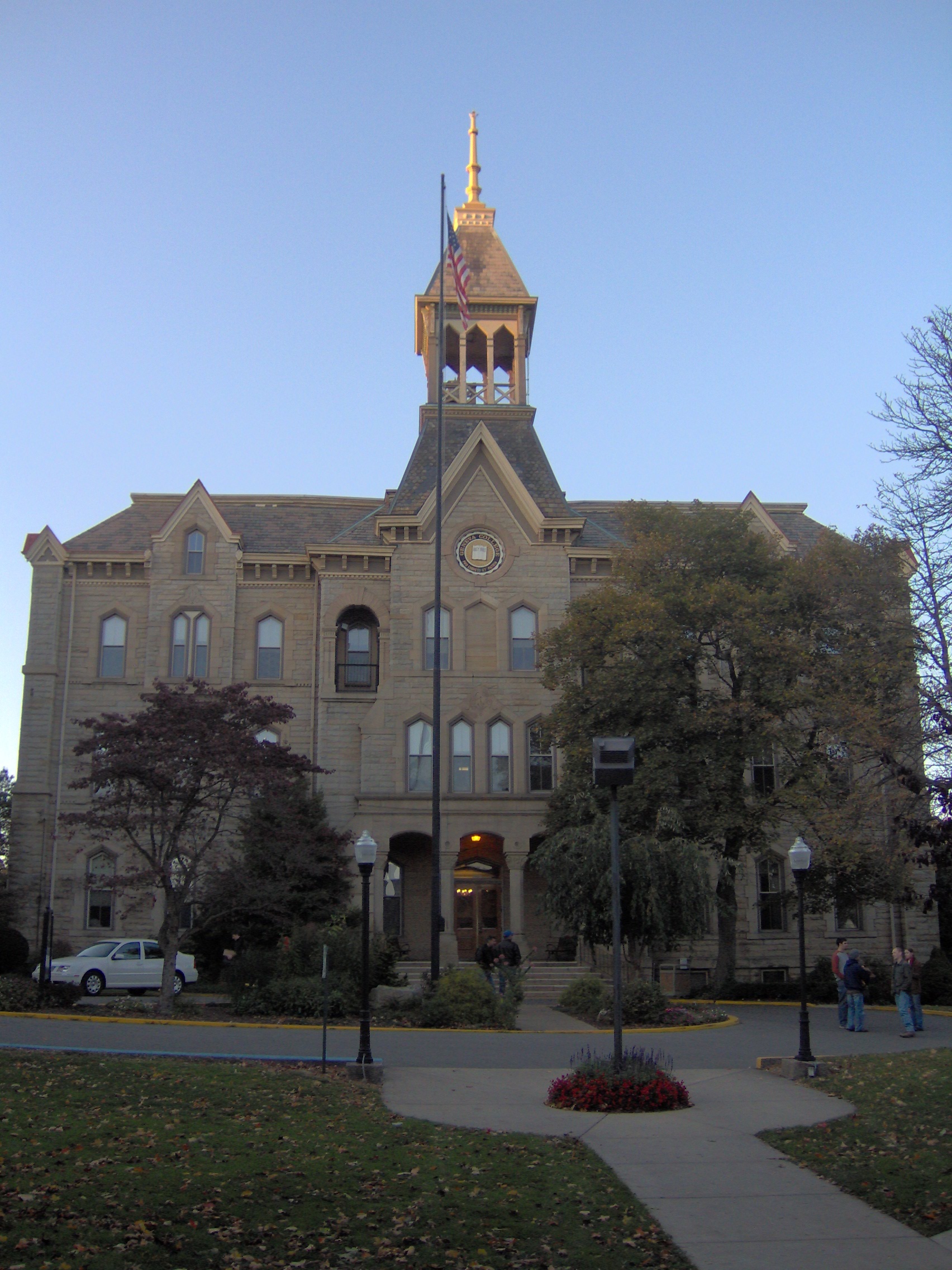 Geneva College is a small, private, located in Beaver Falls, , . Founded in 1848, it is affiliated with the (RPCNA).

Geneva College was founded in 1848 in Northwood, , by John Black Johnston, a minister of the RPCNA. Originally called "Geneva Hall", the college was named after the Swiss center of the Reformed faith movement. After briefly closing during the , the college continued operating in Northwood until 1880. By that time, the college leadership had begun a search for alternate locations that were closer to urban areas. After considering several locations in the , the denomination chose the College Hill neighborhood of Beaver Falls, Pennsylvania. The college constructed its current campus on land donated by the . Old Main, the oldest building on campus, was completed in 1881.

The took over the campus during for use as a training base. Fact|date=November 2007 The college experienced significant growth after as many former servicemen took advantage of the educational provisions of the . The college also experienced another growth period in the 1990s. The most recent major campus construction project to be completed was the construction of the Rapp Technical Design Center in 2002. A major project to reroute , which runs through the campus, was completed in November 2007. [ [http://www.geneva.edu/object/nr_rt18_opens.html New Route 18 Open] , Geneva College, . Accessed .] Improvements to Reeves Stadium and the construction of a campus entrance are expected to be completed by Fall 2008. [ [http://www.geneva.edu/object/rt18_timeline.html Beyond the Bend Timeline] , Geneva College. Accessed .]

Two bodies oversee the administration of the college, the Board of Corporators and the Board of Trustees; while the Corporators are the official legal owners of the college, in practice most authority is delegated to the Trustees, who are elected by the Corporators. The RPCNA still takes an active sponsorship and oversight role in the college: the college president, chaplain, and chairman of the Department of Biblical Studies must be members of the RPCNA, and all members of the Board of Corporators and the majority of the Board of Trustees must be RPCNA members. All professors and lecturers in the Department of Biblical Studies must subscribe to the , and all full-time faculty and staff members must submit a written statement confessing faith in Jesus Christ and the Christian religion.

Geneva offers undergraduate degree programs in the arts and sciences, such as elementary education, business, engineering, student ministry, biology, and psychology. In 2006, the Educational Testing Service (ETS) rated the Business and Accounting undergraduates in the 95th percentile amongst American colleges.

Geneva offers a Degree Completion Program (DCP) for degrees in Human Resource Management, Community Ministry or Organizational Development for adult students mainly at off-campus locations. Geneva also established the Center for Urban Theological Studies in Philadelphia and has sister colleges in () and ().

Geneva also offers graduates studies in several fields. These include a Master of Business Administration, a Masters of Science in Organizational Leadership, Masters of Education in Reading or Special Education, and Masters of Arts in Counseling or Higher Education.

Geneva established the Center for Technology Development in 1986 for providing research, prototyping and technical support to local industries and entrepreneurs. The Center was awarded first prize in the Consolidated Natural Gas Company’s Annual Award of Excellence competition in 1990.

Geneva College is a member of the . Accreditations include the , , , and the Council for Accreditation of Counseling and Related Educational Programs.

The school's sports teams are called the Golden Tornadoes. Beginning with the 2007-08 school year, Geneva will begin play as a provisional member in NCAA Division III, as well as the . However, Geneva will not qualify for post season play or conference Player of the Week honors until they gain full membership in 2011. [http://www.pacathletics.org/sports/pac_football.html] The Golden Tornadoes will also be joining the East Coast Athletic Conference and will continue its membership in the National Christian College Athletic Association. [ [http://www.geneva.edu/page/athletics Athletics] , Geneva College. Accessed .]

Football competition began in 1890 under head coach William McCracken. Over the years, the football team has amassed an all-time record of 496 wins, 437 losses, and 48 ties with five appearances in the . The current football coach is .

The majority of students come from evangelical or conservative backgrounds.Fact|date=February 2008 Students must attend a designated number of weekly college-sponsored chapels to qualify for graduation. Alcohol is banned from the campus, and use is restricted to a purpose-built gazebo near Pearce Hall. Greek letter fraternities and sororities are not permitted.

Geneva College bills itself the "Birthplace of College Basketball." The first recorded basketball game involving a college team occurred at Geneva College on , when the Geneva College Covenanters defeated the New Brighton .

Geneva was founded by Scottish and Scots-Irish immigrants. Many names of campus buildings and areas bear Scottish names:
*The main meeting area of the Student Center is called "Skye Lounge" after the .
*The restaurant-style eating area is called "The Brig", short for , commemorating a play about a mythical Highland village.
*The guest dining room is referred to as the "Clan Room", after the .

Geneva sports teams were nicknamed the "Covenanters" until the 1950s. Members of the RPCNA are sometimes referred to as Covenanters because the denomination traces its roots to the Covenanting tradition of Reformation era . The modern sports nickname of "Golden Tornadoes" commemorates the "Golden Tornado" of , when a major struck the college. Although the storm caused significant damage to the campus, there were no serious injuries. College students and faculty rejoiced at what they believed was a sign of God's mercy.

Geneva's traditional sports rivalry is with Westminster College in nearby .Fact|date=February 2008 The rivalry was partially interrupted for several years around the turn of the 21st century when Westminster left the NAIA for the . The rivalry will continue into the future, however, as both schools will be members of the NCAA Division III by 2007.

On , , the college filed a federal lawsuit against the state of Pennsylvania, alleging that a decision by the state to block the college from participating in the state sponsored CareerLink job service amounted to a violation of the college's First Amendment rights. In response, the state argued that the college's requirement that faculty members subscribe to the Christian religion amounted to discrimination, to which the college responded that the faculty religious test constituted a under existing federal employment law. The lawsuit was co-sponsored by the and argued by the .

In April 2007, the college reached a settlement with CareerLink in U.S. District Court in Pittsburgh. Geneva's right to access to CareerLink will be restored and the college will retain the statement on its employment applications stating, "Compliance with Geneva's Christian views is considered a bona fide occupational qualification ... and will have a direct impact on employment consideration." [ [http://www.timesonline.com/site/news.cfm?newsid=18278577&BRD=2305&PAG=461&dept_id=478569&rfi=6] , Beaver County Times]

Other places on campus

The following structures are owned by the college, but currently not being used for any activities or events.
*Geneva R.P. Church Building - Formerly the meeting place of the Geneva Reformed Presbyterian Church congregation, the buff colored brick building was sold to Geneva College when that congregation merged with the nearby First Reformed Presbyterian Church in the early 21st century. Though the building is owned by Geneva, it is only being used for some music practice rooms.

*Music and Fine Art Center - Will house the college's band, and music program, along with a giant auditorium. May also be used for play and musical productions.