Theobroma cacao also cacao tree and cocoa tree, is a small (4–8 m or 15–26 ft tall) evergreen tree in the family Sterculiaceae (alternatively Malvaceae), native to the deep tropical region of the Americas. Its seeds are used to make cocoa powder and chocolate. There are two prominent competing hypotheses about the origins of the domestication of the originally wild Theobroma cacao tree. One is that wild examples were originally distributed from southeastern Mexico to the Amazon basin, with domestication taking place both in the Lacandon area of Mexico and in lowland South America. But recent studies of Theobroma cacao genetics seem to show that the plant originated in the Amazon and was distributed by humans throughout Central America and Mesoamerica.

The tree is today found growing wild in the low foothills of the Andes at elevations of around 200–400 m (650–1300 ft) in the Amazon and Orinoco river basins. It requires a humid climate with regular rainfall and good soil. It is an understory tree, growing best with some overhead shade. The leaves are alternate, entire, unlobed, 10–40 cm (4–16 in) long and 5–20 cm (2–8 in) broad. 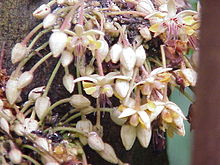 The flowers are produced in clusters directly on the trunk and older branches; they are small, 1–2 cm (1/2–1 in) diameter, with pink calyx. While many of the world's flowers are pollinated by bees (Hymenoptera) or butterflies/moths (Lepidoptera), cacao flowers are pollinated by tiny flies, Forcipomyia midges in the order Diptera.[1] The fruit, called a cacao pod, is ovoid, 15–30 cm (6–12 in) long and 8–10 cm (3–4 in) wide, ripening yellow to orange, and weighs about 500 g (1 lb) when ripe. The pod contains 20 to 60 seeds, usually called "beans", embedded in a white pulp. The seeds are the main ingredient of chocolate, while the pulp is used in some countries to prepare a refreshing juice. Each seed contains a significant amount of fat (40–50%) as cocoa butter. Their most noted active constituent is theobromine, a compound similar to caffeine.

The scientific name Theobroma from Greek θεοβρῶμα means "food of the gods". The word cacao itself derives from the Nahuatl (Aztec language) word cacahuatl, learned at the time of the conquest when it was first encountered by the Spanish. Similar words for the plant and its by-products are attested in a number of other indigenous Mesoamerican languages.

Cultivation, use, and cultural elaboration of cacao were early and extensive in Mesoamerica. Ceramic vessels with residues from the preparation of cacao beverages have been found at archaeological sites dating back to the Early Formative (1900-900 BC) period. For example, one such vessel found at an Olmec archaeological site on the Gulf Coast of Veracruz, Mexico dates cacao's preparation by pre-Olmec peoples as early as 1750 BC.[2] On the Pacific coast of Chiapas, Mexico, a Mokaya archaeological site provides evidence of cacao beverages dating even earlier, to 1900 BC.[2]

In a study of Theobroma cacao tree genetics by Motamayor et al., they suggest a domestication and spread from lowland Amazonia, contesting an earlier hypothesis that the tree was domesticated independently in both the Lacandon area of Mexico, and in Amazonia. The cacao tree belongs to the Theobroma genus, in the Sterculiaceae family, that contains 22 species. Today, the most common of the cultivated species is Theobroma cacao, with two subspecies and three forms. Wild cacaos falling into two groups. The South American subspecies spaerocarpum has a fairly smooth melon-like fruit. In contrast, the Mesoamerican cacao subspecies has ridged, elongated fruits. At some unknown early date, the subspecies T. cacao reached the southern lowlands of Mesoamerica and came into wide usage.

Kakaw ('cacao') written in the Maya script. The word was also written in several other ways in old Maya texts.

The Maya believed that the kakaw (cacao) was discovered by the gods in a mountain that also contained other delectable foods to be used by the Maya. According to Maya mythology, the Plumed Serpent gave cacao to the Maya after humans were created from maize by divine grandmother goddess Xmucane (Bogin 1997, Coe 1996, Montejo 1999, Tedlock 1985). The Maya celebrated an annual festival in April to honor their cacao god, Ek Chuah, an event that included the sacrifice of a dog with cacao colored markings; additional animal sacrifices; offerings of cacao, feathers and incense; and an exchange of gifts. In a similar creation story, the Mexica (Aztec) god Quetzalcoatl discovered cacao (cacahuatl: "'bitter water"'), in a mountain filled with other plant foods (Coe 1996, Townsend 1992). Cacao was offered regularly to a pantheon of Mexica deities and the Madrid Codex depicts priests lancing their ear lobes (auto-sacrifice) and covering the cacao with blood as a suitable sacrifice to the gods. The cacao beverage as ritual were used only by men, as it was believed to be toxic for women and children.[citation needed]

There are several mixtures of cacao described in ancient texts, for ceremonial, medicinal uses as well as culinary purposes. Some mixtures included maize, chili, vanilla (Vanilla planifolia), and honey. Archaeological evidence for use of cacao, while relatively sparse, has come from the recovery of whole cacao beans at Uaxactun, Guatemala (Kidder 1947) and from the preservation of wood fragments of the cacao tree at Belize sites including Cuello and Pulltrouser Swamp (Hammond and Miksicek 1981; Turner and Miksicek 1984). In addition, analysis of residues from ceramic vessels has found traces of theobromine and caffeine in early formative vessels from Puerto Escondido, Honduras (1100-900 BC) and in middle formative vessels from Colha, Belize (600-400 BC) using similar techniques to those used to extract chocolate residues from four classic period (ca. 400 AD) vessels from a tomb at the archaeological site of Rio Azul. As cacao is the only known commodity from Mesoamerica containing both of these alkaloid compounds, it seems likely that these vessels were used as containers for cacao drinks. In addition, cacao is named in a hieroglyphic text on one of the Rio Azul vessels. Cacao was also believed to be ground by the Aztecs and mixed with tobacco for smoking purposes.

The first Europeans to encounter cacao were Christopher Columbus and his crew in 1502,[citation needed] when they captured a canoe at Guanaja that contained a quantity of mysterious-looking "almonds." The first real European knowledge about chocolate came in the form of a beverage which was first introduced to the Spanish at their meeting with Moctezuma in the Aztec capital of Tenochtitlan in 1519. Cortez and others noted the vast quantities of this beverage that the Aztec emperor consumed, and how it was carefully whipped by his attendants beforehand. Examples of cacao beans along with other agricultural products were brought back to Spain at that time, but it seems that the beverage made from cacao was introduced to the Spanish court in 1544 by Kekchi Maya nobles brought from the New World to Spain by Dominican friars to meet Prince Philip (Coe and Coe 1996). Within a century, the culinary and medical uses of chocolate had spread to France, England and elsewhere in Western Europe. Demand for this beverage led the French to establish cacao plantations in the Caribbean, while Spain subsequently developed their cacao plantations in their Philippine colony (Bloom 1998, Coe 1996). The Nahuatl-derived Spanish word cacao entered scientific nomenclature in 1753 after the Swedish naturalist Linnaeus published his taxonomic binomial system and coined the genus and species Theobroma ("food of the gods") cacao.

Traditional pre-Hispanic beverages made with cacao are still consumed in Mesoamerica. These include the Oaxacan beverage known as tejate.

Cacao beans constituted both a ritual beverage and a major currency system in pre-Columbian Mesoamerican civilizations. At one point the Aztec empire received a yearly tribute of 980 loads (xiquipil in nahuatl) of cacao, in addition to other goods. Each load represented exactly 8,000 beans.[3] The buying power of quality beans was such that 80-100 beans could buy a new cloth mantle. The use of cacao beans as currency is also known to have spawned counterfeiters during the Aztec empire.[4]

In some areas, such as Yucatán, cacao beans were still used in place of small coins as late as the 1840s.[citation needed]

Cacao seed in the fruit or Pocha

Cacao production has increased from 1.5 million tons in 1983-1984 to 3.5 million tons in 2003-2004, an increase that has almost entirely been due to the expansion of the production area rather than to yield increases. Cacao is grown both by large agro-industrial plantations and also by small producers.

Major cocoa bean processors include: Hershey's, Nestlé and Mars, all of which purchase cocoa beans via various sources.

In June 2009, Mars Botanicals, a division of Mars, launched Cirku, a cocoa extract product that provides cocoa ﬂavanols made with a patented process that contains a high level of phytonutrients.[8]

Various plant pests and diseases can cause serious problems for cacao production; see: Illustrated guide to pests and their management.

In September 2010, a team of scientists announced a draft sequence of the cacao genome (Matina1-6 genotype)[9] Retrieved September 24, 2010. A second unrelated project (The International Cocoa Genome Sequencing Consortium) sequenced a different type of cacao (a criollo type discovered in Belize (B97-61/B2) and a manuscript describing the analysis of this data was published December 2010 in the peer reviewed journal Nature Genetics.[10] The cacao genome is about 430,000,000 bp in length consisting of 10 chromosome and has about 28,798 genes compared to the roughly 30,000 genes of the human genome.[11] About 20% of the cacao genome consists of transposable elements, a low proportion compared to other plant species. The genome sequence will help accelerate research on cacao molecular biology and of breeding for elite varieties of cacao through marker assisted selection.