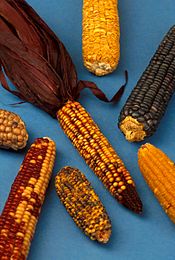 Agriculture in Mesoamerica dates to the Archaic period of Mesoamerican chronology (8000-2000 BC). During this period, many of the hunter gatherer micro-bands in the region began to cultivate wild plants. The cultivation of these plants probably started out as creating increased surplus and known areas of fall back, or starvation foods, near seasonal camps, that the band could rely on when hunting was bad, or when there was a drought. The plants could have been brought purposely, or by accident. The former could have been done by bringing a wild plant food closer to a camp site, or to a frequented area, so it was easier to get to or collect. The latter could have happened as certain plant seeds were eaten and not fully digested, causing these plants to grow wherever human habitation would take them. By creating these known areas of plant food, it would have been easier for the band to be in the right place, at the right time, to collect them.

As the Archaic period moved on, these cultivated plant foods became more and more important to the people of Mesoamerica. The reliability of the cultivated plant foods would allow the micro-bands to increase in size. These larger bands would require more food, and that would lead to even greater reliance on purposely-cultivated plant foods. Eventually, a subsistence pattern, based on plant cultivation, supplemented with small game hunting, became much more reliable, efficient, and generated a larger yield. As agriculture grew to become a larger part of the Mesoamerican diet, the people would have increasingly settled down in permanent villages and developed increased division of labor and social stratification as surplus grew.

Another group to consider in the origins of Mesoamerican agriculture is the sedentary fishers. These people would have already lived in semi-permanent villages, and could have experimented with cultivating wild plants to supplement their shellfish diet. As cultivation became more focused, many plant species became domesticated. These plants were no longer able to reproduce on their own, and many of their physical traits were being modified by human farmers. The most famous of these, and the most important to Mesoamerican agriculture, is maize.

Huitlacoche at a Mexican market

Richard Stockton MacNeish has done an extensive archaeological survey of Mesoamerica, and determined that the most likely place for the first cultivation for maize was probably in the Tehuacan Valley around 5000 BC. Maize arrived at this point through the Catastrophic Sexual Transmutation of Teosinte,[1] the ancestor of maize. Note that because of this genetic mutation maize is the only domesticated plant that does not grow in the wild. It became the single most important crop in all of Mesoamerica. Maize is storable for long periods of time, it can be ground into flour, and it easily turns into surplus for future use. Maize became vital to the survival of the people of Mesoamerica, and that is reflected in their origin, myths, artwork, and rituals.

The second most important crop in Mesoamerican agriculture is the squash. Cultivated and domesticated before maize, dated to 10,000 years ago[2] in Oaxaca, the people of Mesoamerica utilize several different types of squash. The most important may be the pumpkin, and its relatives. The seeds of the pumpkin are full of protein, and are easily transportable. Another important member of the squash family is the bottle gourd. This fruit may not have been very important as a food source, but the gourd itself would have been useful as a water container. Another major food source in Mesoamerica are beans. These may have been used as early as squash and maize, but the exact date of domestication is not known. These three crops form the center of Mesoamerican agriculture. Maize, beans, and squash form a triad of products, commonly referred to as the "Three Sisters," that provided the people of Mesoamerica a complementing nutrient triangle. Each contributes some part of the essential vitamin mix that human beings need to survive. The other benefit that these three crops have is that planting them together helps to retain nutrients in the soil.

Many other plants were first cultivated in Mesoamerica; tomatoes, avocados, guavas, chilli peppers, manioc, agave, and prickly pear were all cultivated as additional food resources, while rubber trees and cotton plants were useful for making cultural products like latex balls and clothing. Another culturally important plant was the cacao. Cacao beans were used as money, and later, the beans were used for making another valuable product, chocolate.

One of the greatest challenges in Mesoamerica for farmers is the lack of usable land, and the poor condition of the soil. Several different methods have been used to combat these problems. The two main ways to combat poor soil quality, or lack of nutrients in the soil, are to leave fields fallow for a period of time, and to use slash and burn techniques. In slash and burn agriculture, trees are cut down and left to dry for a period of time. The dry wood and grasses are then set on fire, and the resulting ash adds nutrients to the soil. These two techniques are often combined to retain as many nutrients as possible. However, in the jungle environment, no matter how careful a farmer is, nutrients are often hard to retain.

To combat the lack of large tracts of usable land, farmers in Mesoamerica have found ways to create more land. The first way to create land is to form terraces along the slopes of mountain valleys. Terraces allow farmers to use more land on the mountain slopes, and to move further up the mountain than they normally would be able to. Some terraces were made out of walls of stones, and others were created by cutting down large trees, and mounding soil around them. In the valleys themselves, there is evidence that the Maya used raised fields in some of the swampy areas, and onto the flood plains. These practices were also used by the Aztecs. However, the Aztecs created floating plots of land called chinampas. These were floating plots of mud and soil, placed on top of layers of thick water vegetation.