This article is about the Aztec city-state. For the modern municipality in Mexico, see Tenochtitlán, Veracruz. For the post-Aztec history, see Mexico City.

Tenochtitlan (Classical Nahuatl: Tenōchtitlān [tenoːtʃˈtitɬaːn]) (sometimes also known as Mexico Tenochtitlan or Tenochtitlan Mexico) was a Nahua altepetl (city-state) located on an island in Lake Texcoco, in the Valley of Mexico. Founded in 1325, it became the capital of the abounding Aztec Empire in the 15th century,[1] until captured by the Spanish in 1521. When paired with Mexico the name is a reference to Mexica, the people of the surrounding Aztec heartland. It subsequently became a cabecera of the Viceroyalty of New Spain, and today the ruins of Tenochtitlan are located in the central part of Mexico City.

Its name comes from Nahuatl tetl ("rock") and nochtli = ("prickly pear") and means "Among the prickly pears [growing among] rocks". Tenochtitlan was one of two Mexican altepetl, the other being Tlatelolco. 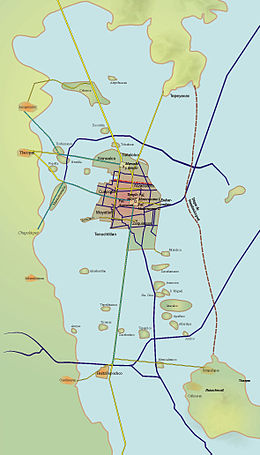 Western side of the shallow Lake Texcoco. Tenochtitlan is the southern part of the main island (under the red line). The northern part is Tlatelolco.

At the time of Spanish conquest, Mexico City comprised Tenochtitlan and Tlatelolco at the same time. Since then, the city extended from north to south from the north border of Tlatelolco to the swamps which by that time were gradually disappearing to the west, the city ended more or less at the present location of Bucareli Street.

It was connected to the mainland by causeways leading north, south, and west of the city. These causeways were interrupted by bridges that allowed canoes and other traffic to pass freely. The bridges could be pulled away if necessary to defend the city. The city itself was interlaced with a series of canals, so that all sections of the city could be visited either on foot or via canoe.

Lake Texcoco was the largest of the five interconnected lakes. Since it formed in an endorheic basin lake, Lake Texcoco was brackish. During the reign of Moctezuma I, the "levee of Nezahualcoyotl" was constructed, reputedly designed by Nezahualcoyotl himself. Estimated to be 12 to 16 km (7.5 to 9.9 mi) in length, the levee was completed circa 1453; the levee kept the spring-fed fresh water in the waters around Tenochtitlan and kept the brackish waters beyond the dike, to the east.

Two double aqueducts, each more than 4 km (2.5 mi) long and made of terracotta,[2] provided the city with fresh water from the springs at Chapultepec. This was intended mainly for cleaning and washing. For drinking, water from mountain springs was preferred. Most of the population liked to bathe twice a day; Moctezuma was said to take four baths a day. As soap they used the root of a plant called copalxocotl (Saponaria americana);[3] to clean their clothes they used the root of metl (Agave americana). Also, the upper classes and pregnant women enjoyed the temazcalli, which was similar to a sauna bath and is still used in the south of Mexico; this was also popular in other Mesoamerican cultures.

The city was divided into four zones or campan, each campan was divided on 20 districts (calpullis, Nahuatl calpōlli), and each calpulli was crossed by streets or tlaxilcalli. There were three main streets that crossed the city, each leading to one of the three causeways to the mainland; Bernal Díaz del Castillo reported that they were wide enough for ten horses. The calpullis were divided by channels used for transportation, with wood bridges that were removed at night. 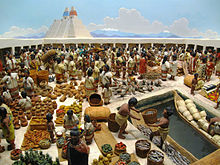 Tlatelolco Marketplace as depicted at The Field Museum, Chicago.

Each calpulli had its own tiyanquiztli (marketplace), but there was also a main marketplace in Tlatelolco – Tenochtitlan's sister city. Cortés estimated it was twice the size of the city of Seville with about 60,000 people trading daily. Bernardino de Sahagún provides a more conservative population estimate of 20,000 on ordinary days and 40,000 on feast days. There were also specialized markets in the other central Mexican cities. 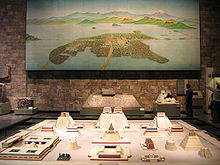 Tenochtitlan and model of Templo Mayor. 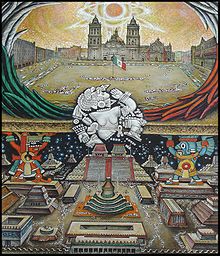 In the center of the city were the public buildings, temples and schools. Inside a walled square, 300 meters to a side, was the ceremonial center. There were about 45 public buildings including: the Templo Mayor, the temple of Quetzalcoatl, the tlachtli (ball game court), the tzompantli or rack of skulls, the temple of the sun, the platforms for the gladiatorial sacrifice, and some minor temples. Outside was the palace of Moctezuma with 100 rooms, each one with its own bath, for the lords and ambassadors of allies and conquered people. Also located nearby was the cuicalli or house of the songs, and the calmecac.

The city had a great symmetry. All constructions had to be approved by the calmimilocatl, a functionary in charge of the city planning.

A 3D model of how the Palace must have looked during Moctezuma's reign; based on an illustration from Codex Mendoza (1542)

The palace of Moctezuma II also had two houses or zoos, one for birds of prey and another for other birds, reptiles and mammals. About 300 people were dedicated to the care of the animals. There was also a botanical garden and an aquarium. The aquarium had ten ponds of salt water and ten ponds of fresh water, containing fish and aquatic birds. Places like this also existed in Texcoco, Chapultepec, Huaxtepec (now called Oaxtepec) and Texcotzingo.

Sahagún reported that the city also had beggars (only crippled people were allowed to beg), thieves and prostitutes. At night, in the dark alleys one could find scantily clad ladies with heavy makeup (they also painted their teeth), chewing tzictli (chicle, the original chewing gum) noisily to attract clients. There seems to have been another kind of women, ahuianis, who had sexual relations with warriors. The Spaniards were surprised because they did not charge for their work.

Bernal Díaz del Castillo was amazed to find latrines in private houses and a public latrine in the tiyanquiztli and main streets. Small boats went through the city collecting garbage, and excrement was collected to be sold as fertilizer. About 1,000 men were dedicated to cleaning the streets.

Tenochtitlan was the capital city of the Aztec civilization, consisting of the Mexica people, founded in 1325. The state religion of the Aztec civilization awaited the fulfillment of an ancient prophecy: that the wandering tribes would find the destined site for a great city whose location would be signaled by a hawk eating a snake while perched atop a cactus. The Aztecs saw this vision on what was then a small swampy island in Lake Texcoco, a vision that is now immortalized in Mexico's coat of arms and on the Mexican flag. Not deterred by the unfavourable terrain, they set about building their city, using the chinampa system (misnamed as "floating gardens") for agriculture and to dry and expand the island.

A thriving culture developed, and the Aztec civilization came to dominate other tribes all around Mexico. The small natural island was perpetually enlarged as Tenochtitlan grew to become the largest and most powerful city in Mesoamerica. Commercial routes were developed that brought goods from places as far as the Gulf of Mexico, the Pacific Ocean and perhaps even the Inca Empire.[5]

After a flood of Lake Texcoco, the city was rebuilt under the rule of Ahuitzotl in a style that made it one of the grandest ever in Mesoamerica.

Spanish conquistador Hernán Cortés arrived in Tenochtitlan on November 8, 1519. At this time it is believed that the city was one of the largest in the world; compared to Europe, only Paris, Venice and Constantinople were larger. In a letter to the Spanish king, Cortés wrote that Tenochtitlan was as large as Seville or Córdoba.[6]

Cortés subsequently directed the systematic destruction and leveling of the city[9] and its rebuilding, despite opposition, with a central area designated for Spanish use (the traza). The outer Indian section, now dubbed San Juan Tenochtitlan, continued to be governed by the previous indigenous elite and was divided into the same subdivisions as before. 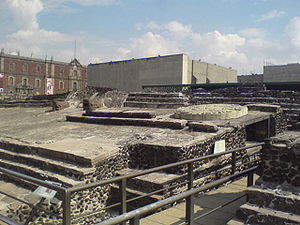 Tenochtilan's main temple complex, the Templo Mayor, was dismantled and the central district of the Spanish colonial city's was constructed on top of it. The location of the Templo Mayor was rediscovered in the early 20th century, but major excavations did not take place until 1978-1982, after utility workers came across a massive stone disc depicting the moon goddess Coyolxauhqui. These finds are held at the Templo Mayor Museum.

Mexico City's Zócalo, the Plaza de la Constitución, is located at the location of Tenochtitlan's original central plaza and market, and many of the original calzadas still correspond to modern streets in the city. The Aztec calendar stone was located in the ruins. This stone is 4 meters in diameter and weighs over 20 tonnes. It was once located half way up the great pyramid. This sculpture was made around 1470 under the rule of King Axayacatl, the predecessor of Tizoc, and is said to tell the Aztec history and prophecy for the future.[10]