The Orinoco is one of the longest rivers in South America at 2,140 km (1,330 mi). Its drainage basin, sometimes called the Orinoquia, covers 880,000 square kilometres (340,000 sq mi), with 76.3% of it in Venezuela and the remainder in Colombia. The Orinoco and its tributaries are the major transportation system for eastern and interior Venezuela and the llanos of Colombia. 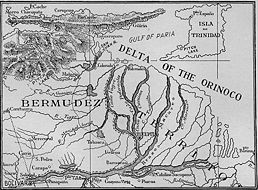 The Orinoco delta, and tributaries in the eastern llanos such as the Apure and Meta, were explored in the 16th century by German expeditions under Ambrosius Ehinger and his successors. In 1531 Diego de Ordaz, starting at the principal outlet in the delta, the Boca de Navios, sailed up the river to the Meta, and Antonio de Berrio sailed down the Casanare, to the Meta, and then down the Orinoco and back to Coro.

Alexander von Humboldt explored the basin in 1800, reporting on the pink river dolphins, and publishing extensively on the flora and fauna.[2]

The course of the Orinoco forms a wide ellipsoidal arc, surrounding the Guiana Shield; it is divided in four stretches of unequal length that roughly correspond to the longitudinal zonation of a typical large river: 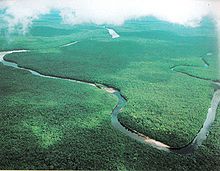 Panorama of the Orinoco River. 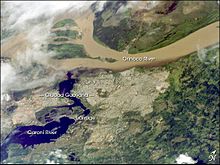 Orinoco River, the second largest in South America, at its confluence with the Caroní River (lower left).[3] 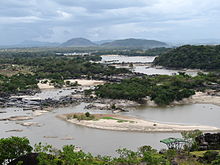 Rapids of the Orinoco River, near Puerto Ayacucho airport, Venezuela. 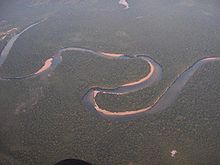 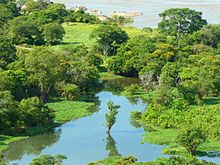 Most of the important Venezuelan rivers are tributaries of the Orinoco, the largest being the Caroní, which joins it at Puerto Ordaz, close to the Llovizna Falls. A peculiarity of the Orinoco river system is the Casiquiare canal, which starts as an arm of the Orinoco, and finds its way to the Rio Negro, a tributary of the Amazon, thus forming a 'natural canal' between Orinoco and Amazon.

Major rivers in the Orinoco Basin

The river is navigable for most of its length, and dredging enables ocean ships to go as far as Ciudad Bolívar, at the confluence of the Caroní River, 435 km (270 mi) upstream. River steamers carry cargo as far as Puerto Ayacucho and the Atures Rapids.

In 1926 a Venezuelan mining inspector found one of the richest iron ore deposits near the Orinoco delta, south of the town of San Felix on a mountain name El Florero. Full-scale mining of the ore deposits began after World War II, by a conglomerate of Venezuelan firms and US steel companies. At the start in the early 1950s, about 10,000 tons of ore-bearing soil was mined per day.[4]

The Orinoco river deposits also contain extensive tar sands in the Orinoco oil belt, which may be a source of future oil production.[5]

Since 1988, the local government of Ciudad Guayana has conducted a swim race in the rivers Orinoco and Caroní, with up to 1000 competitors. Since 1991, the "Paso a Nado Internacional de los Rios Orinoco-Caroní" has been celebrated every year, on a Sunday close to 19 April. Worldwide, this swim-meet has gained in importance, and it has a large number of competitors.[6]