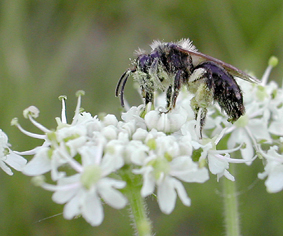 
Hymenoptera is one of the larger orders of s, comprising the sawflies, s, s, and s. The name refers to the membranous wings of the insects, and is derived from the Ancient Greek (humẽn): membrane and (pteron): wing. The hindwings are connected to the forewings by a series of hooks called .

Females typically have a special for inserting eggs into hosts or otherwise inaccessible places. The ovipositor is often modified into a stinger. The young develop through complete metamorphosis — that is, they have a worm-like larval stage and an inactive pupal stage before they mature. (See .)

Hymenoptera originated in the , the oldest fossils belonging to the family .Social hymenopterans appeared during the . The evolution of this group has been intensively studied by A. Rasnitsyn, M. S. Engel, G. Dlussky, and others.

Among the hymenopterans, sex is determined by the number of s an individual possesses. Fertilized eggs get two sets of chromosomes (one from each parent's respective s), and so develop into females, while unfertilized eggs only contain one set (from the mother), and so develop into males; the act of fertilization is under the voluntary control of the egg-laying female. This phenomenon is called . Note, however, that the actual genetic mechanisms of haplodiploid sex determination may be more complex than simple chromosome number. In many Hymenoptera, sex is actually determined by a single gene locus with many alleles. In these species, haploids are male and diploids heterozygous at the sex locus are female, but occasionally a diploid will be homozygous at the sex locus and develop as a male instead. This is especially likely to occur in an individual whose parents were siblings or other close relatives. Diploid males are known to be produced by inbreeding in many ant, bee and wasp species.

One consequence of haplodiploidy is that females on average actually have more genes in common with their sisters than they do with their own daughters. Because of this, cooperation among kindred females may be unusually advantageous, and has been hypothesized to contribute to the multiple origins of within this order.

The suborder includes the , s, and parasitic wood wasps. The group may be , as it has been suggested that the family may be the group from which the Apocrita arose. They have an unconstricted junction between the thorax and abdomen, and the larvae of free-living forms are herbivorous, have legs, s (on every segment, unlike ( and s)), and .

The wasps, bees, and ants together make up the suborder , characterized by a constriction between the first and second abdominal segments called a wasp-waist (petiole), also involving the fusion of the first abdominal segment to the . Also, the larvae of all Apocrita do not have legs, prolegs, or ocelli.