Swiss Federal Railways (German: SBB, Schweizerische Bundesbahnen; French: CFF, Chemins de fer fédéraux suisses; Italian: FFS, Ferrovie federali svizzere; Romansh: Viafiers federalas svizras; the abbreviations VFS (Romansh) and SFR (English) are not in official use) is the national railway company of Switzerland headquartered in Bern. Formerly a government institution, it is since 1999 a special stock corporation with all shares held by the Swiss Confederation or the Swiss cantons. By the end of 2006, the corporation was handed over from the long-term CEO Benedikt Weibel to his successor Andreas Meyer.

The Swiss Federal Railways are divided into three divisions and two groups:

The corporation is led in an enterpreneural manner. A performance agreement between the Swiss Federal Railways and the Swiss Confederation defines the requirements and is updated every four years. At the same time the compensation rates per train and track kilometre are defined.

The subsidiary SBB GmbH is responsible for passenger traffic in Germany. It operates the Wiesentalbahn and the Seehas services.

To take care of the historical heritage, the Stiftung Historisches Erbe der SBB ("SBB Historic") was founded in 2002. This foundation takes care of the historic rolling stock and runs a technical library in Bern, a historic archive, a photo archive and the poster collection of the Swiss Federal Railways. (TM) 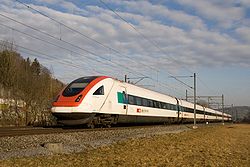 ICN between Zurich and Winterthur

Historic SBB push-pull train consisting of BDe 4/4, A, ABt near Hettlingen ZH

In the 19th century, all Swiss railways were owned by private ventures. The economic and political interests of these companies led to lines being built in parallel and some companies went bankrupt in the resulting competition. On 20 February 1898 the Swiss people agreed in a referendum to the creation of a state-owned railway company. The first train running on the account of the Swiss Confederation ran during the night of New Year's Day in 1901 from Zurich via Bern to Geneva. January 1, 1902 is regarded as the official birth date of the Swiss Federal Railways. In the meantime, the trains were run by the Swiss Confederation on behalf of the private companies.

The following railway companies were nationalised:

Other companies were included later, and the rail network was extended. It is still growing today.

First class compartments were discontinued on 3 June 1956, and second and third class accommodation was reclassified as first and second class.

In 1982 SBB-CFF-FFS introduced the Taktfahrplan ("clockface timetable"), with trains for certain destinations leaving every 60 minutes, greatly simplifying the timetable.

On December 12, 2004 the first phase of Rail2000, an ambitious programme to improve the company's services, was put into effect. The core element was the Zurich-Bern-Basel triangle, where travel times between the cities was reduced to under one hour, resulting in good connections from these stations for most trains. Some connections between cities got two trains in each direction per hour or more, and the S-Bahn services were intensified to four or more trains per hour. Because of these changes 90% of the timetable was changed, 12% more trains were scheduled and travel times generally improved. It was the greatest timetable change since the introduction of the Taktfahrplan.

For this change to be possible, large parts of the infrastructure had to be modified and many stations were rebuilt, for instance the line from Ziegelbrücke to Sargans or Bern main station which got the "wave of Bern", a platform over the tracks to provide better access to the platforms and the city centre.

On 22 June 2005 a short circuit on a long distance power transmission line in central Switzerland led to a chain reaction. The entire Swiss Federal Railways network was out of service during rush hour and an estimated 200,000 people and 1500 trains were stuck at stations or somewhere on the track. It turned out that the power transmission network of the SBB-CFF-FFS was overloaded and did not provide enough redundancy to tolerate the shutdown of the 4 cable Amsteg-Steinen power line due to construction works. So, the power grid was split in two parts, the northern half being overloaded and the southern half having a load reduction for the SBB power plants are situated in the southern part (the Alps), while most of the power is needed in the northern part (the Swiss plateau). The situation led to high voltage fluctuations and finally breakdown and emergency shutdown of the entire power supply.

In the same year, the Swiss Federal Railways received the Wakker Prize, an award given out by the Swiss Heimatschutz (an institution aiming to preserve the view of cities and villages in terms of buildings), which is usually only granted to communes, for their extraordinary efforts. The Swiss Federal Railways have many high-class (listed) buildings from well-known architects such as Herzog & de Meuron, Santiago Calatrava or Max Vogt.

Since the timetable change of 11 December 2005 all trains and most buildings are non-smoking.

The clock of the Swiss Federal Railways, designed by Hans Hilfiker, has become a national icon. 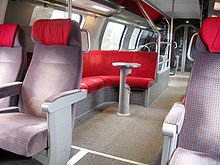 The inside of a double deck intercity

The delivery of the last Re 465 marked the end of the Swiss locomotive industries with the closure of the Swiss Locomotive and Machine Works. The Swiss Federal Railways were split into three divisions - Passenger, Freight and Infrastructure, each with independent locomotive supply policies. Because the Passenger division got all modern Re 460 and opted for multiple unit trains, mainline locomotives were bought only by the Cargo division, namely Re 482 "Traxx F140 AC" (2002), Re 484 "Traxx F140 MS" (2004) and Re 474 "ES64 F4" (2004).

Some of the most popular historic multiple unit trainsets are the Roten Pfeile ("Red Arrows") (RAe 2/4) and the "Churchill-Pfeil" (RAe 4/8). In international traffic the Trans-Europ-Express (TEE) diesel trainsets appeared in 1957, but were replaced by four-systems electric trainsets RAe TEEII in 1961.

On 12 May 2010, Swiss Federal Railways announced its largest order of rolling stock; buying 59 double-deck EMUs from Bombardier, plus an option for another 100 trainsets. The new trains will be delivered from 2012 to 2019.[2] 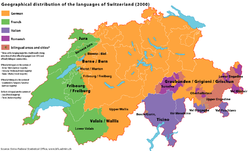 Distribution of Languages in Switzerland

The SBB operates in all three official languages. (Romansch is categorised as a national language, and is not an official one. The Romansh-speaking part of Switzerland is served by the RhB in any event). Stations are usually named with the abbreviation corresponding to, and signposted exclusively in, the language of the locality, i.e. Zürich SBB, Lausanne CFF. Trains are labelled "SBB CFF FFS". 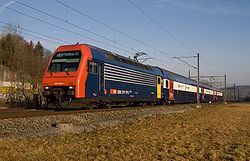 The SBB has the following services:

Regional trains are sometimes operated by another Swiss railways operator (for example, the Bern S-Bahn services operated by the BLS.)

The SBB also operates international EuroCity and EuroNight trains while within Switzerland, while Deutsche Bahn operates InterCityExpress services to, from, and (a few services) within the country. It also has a few TGV stations.