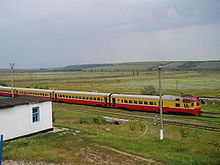 In 1844, Governor-General of Novorossiya and Bessarabia Count Mikhail Vorontsov has developed a project of a railway, connecting Odessa and Parcani village by the Dniester. Odessa- Kiev railway company proposed to connect Odessa and Kiev with a branch to Parcani via Tiraspol. According to the decree of Nikolay I, the construction was sponsored by the government funds.

In 1871 a bridge over the Dniester was constructed. On August 28, 1871, the railway linking Tiraspol with Chişinău was officially opened. This date is recognized as the date of establishment of Moldovan Railways. The line, connecting Bessarabia to the Black Sea and the railway network of Ukraine and Russia became the basis for the future development.

On May 18 [O.S. May 6] 1872 a Russian diplomat agent, Ivan Alekseevich Zinov'ev and the Romanian Minister of Foreign Affairs Gheorghe Costaforu signed a rail junction covention, which was ratified on January 21 [O.S. January 9] 1873.[1] On June 1, 1875, the line Chişinău-Corneşti-Ungheni was opened (the Chişinău-Corneşti railway was built between 1871 and 1873) and connection to Romania was established. The Eiffel Bridge was opened on April 21 [O.S. April 9] 1877, just three days before the outbreak of the Russo-Turkish War (1877–1878).

In the first months of the war the Tighina-Basarabeasca-Reni-Giurgiuleşti line was hastily built; it opened in November 1877. In 1893-1894 the Lipcani-Ocniţa-Otaci, Ocniţa-Bălţi and Bălţi-Floreşti-Râbniţa-Cobasna lines started operation. During World War I the Bălţi-Ungheni section was built.

In the early 1920s, as Moldova had united with Romania, the tracks were converted to standard gauge. In the interwar years the Basarabeasca-Cantemir and Revaca-Căinari lines appeared.

After World War II Moldova became part of the Soviet Union and the rail network reverted to broad gauge. During the Soviet era the Cantemir-Cahul line was built (1971).

Most of the rolling stock used by CFM was manufactured in the USSR and other countries of the Soviet block. The most widespread type of the traction unit is Soviet-built triple section 3TE10M (sometimes only 1 or 2 sections are used). Their use in Moldova was motivated by steep gradients on some portions of the rail network (especially, in the regions with hilly terrains), where additional power was needed to pull heavy freight trains. Other popular types of locomotives are M62 ("Mashka") and 2TE10L. Sometimes, Czech-built shunters ChME3 are used as traction units for local passenger operations. The only type of DMU operated by CFM is D1, manufactured by Hungarian Ganz-MAVAG.

CFM personnel largely consists of Russian speakers, Russian is the language used in the process of operation. Notably, CFM chief executive Miron Gagauz, who held the post of the Minister of Transportation, was one of few members of the Government who did not speak the official language of the country. Historically, CFM has good relations with the Communist Party of Moldova. In 2009, its employees signed a letter where they condemned the opposition protests that followed the 2009 parliamentary elections. They described the events as "an attempt to bring chaos into the country and to destroy everything positive that was built by the current government", claimed that "the elections were carried out in conformity with the international norms and national law on elections" and "the victory of the communists is a logical result of their eight-year stay in power", expressed "full support to the elected power", and called on "punishing the responsible".

Between Moldova and Romania there is a break-of-gauge (Romania employing standard gauge). The most important crossing (including gauge changing equipment) is Ungheni-Iaşi, another two are Cantemir-Falciu and Giurgiuleşti-Galaţi. International passenger trains run to Bucharest, Kiev, Minsk, Saint Petersburg and Moscow.