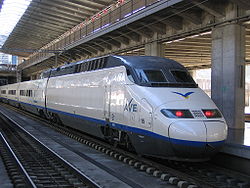 The name RENFE is derived from that of the former Spanish National Railway Network, RENFE (Red Nacional de los Ferrocarriles Españoles) created on 24 January 1941 with the nationalization of Spain's railways. As per EU Directive 91/440, RENFE was divided into Renfe Operadora (operations) and ADIF (infrastructure) on 1 January 2005. At the same time, the existing RENFE double-arrowed logo (nicknamed the "galleta", Spanish for biscuit), first introduced in 1971 and facelifted in 1983, with a sans-serif font and again in 2000, with a mixed case italic font, has been replaced by a dark purple lower-case wordmark designed by Interbrand, and also replaces some of the separate logos used by the other sectors, although the old RENFE logo remains in use in some stations in Spain and on maps to indicate a RENFE station.

The Railway Sector Act of 2003 separated the management, maintenance and construction of rail infrastructure from train operation. The first activity is now the responsibility of a new public company, Administrador de Infrestructuras Ferroviarias (ADIF), while RENFE (full name: Renfe Operadora) owns the rolling-stock and remains responsible for the planning, marketing and operation of passenger and freight services (though no longer with a legal monopoly).

The Spanish State railways are currently engaged in a major transformation and modernisation process to keep up with the liberalisation of railway transportation elsewhere in Europe. Key to this effort is a major overhaul of their dated ICT (information and communication technology) systems through an ICT renewal project scheduled for completion at the end of 2010 under the responsibility of Corporate Director of Information Systems Oscar Gomez Barbero. So far, the company has introduced improvements to their internet ticket sales and adopted new ICT management practices within a "more industrial" organisational model, though Mr Gomez has publicly acknowledged the difficulties in transforming what still remains a very hierarchical organisation. 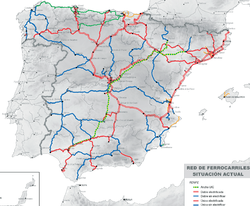 Map of the Spanish rail network as it was in 2005, with colour-coded track types. Renfe Operadora operates in broad and standard gauge lines. 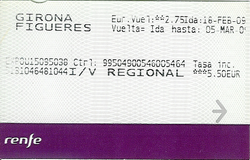 The company operates some 15,000 km of railways, 7,000 km of them electrified. Most of which are constructed to the broad "Iberian" gauge of 1668 mm, the same as that used in Portugal but wider than the gauge of 1435 mm which is standard in France and most of western and central Europe. The newer high-speed (AVE) network, however, has been built to the international standard gauge of 1435 mm in anticipation of its eventual connection to the rest of the European railway system. For this reason, the 1435-mm gauge is generally termed "European gauge" in Spain.

The Spanish high-speed system is called AVE. (Alta Velocidad Española, Spanish High Speed). The logo incorporates a feature which resembles a bird (ave in Spanish). The high-speed lines are built to the standard European gauge (1435 mm).

Construction of the high-speed rail line between Madrid and Seville began in 1988 and operation commenced in 1991. Train speed on the Seville line is 300 km/h. The second high-speed rail line (Madrid to Barcelona) was completed in 2007 with the inaugural service commencing at 6 am February 20, 2008. The operational speed on this route is 350 km/h. The greater part of the line (Madrid to Lleida) was placed into service on 11 October 2003, with connection to Huesca from Zaragoza. The third high-speed line (Madrid to Toledo) was opened in November 2005, followed by the spur from Córdoba to Málaga as far as Antequera in 2007. Another high-speed route from Madrid to Valladolid was opened in 2007, and other lines to Valencia and Lisbon are being designed. The route Madrid-Galicia is under construction between the major Galician cities.

Other lines operated by RENFE include Alaris, a moderate-speed line between Madrid and Valencia.

In addition to intercity transport, RENFE operates commuter train systems, known as Cercanías (or Rodalies in Catalonia and Cercanías-Aldirikoak in the Basque Country), in eleven metropolitan areas, including Madrid and Barcelona. The former was targeted in the 11 March 2004, Madrid train bombings. While the latter and some of the regional trains going to Barcelona have been without service since 20 October 2007. In some cities, RENFE shares the market with other commuter railway operators, such as FGC in Barcelona.

Renfe Operadora utilises the following rolling stock and commercial products inside of its two divisions: 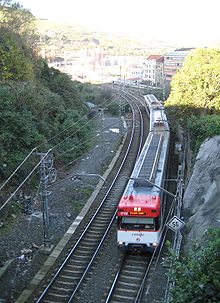