Maximilian Schell (born 8 December 1930) is an Austrian-born Swiss actor[1] who won the Academy Award for Best Actor for his role in Judgment at Nuremberg in 1961. He is also a writer, director and producer of several films.

Schell was born in Vienna, Austria, the son of Margarethe (née Noe von Nordberg), an actress who ran an acting school, and Hermann Ferdinand Schell, a Swiss poet, novelist, playwright, and owner of a pharmacy.[2][3] His parents were Roman Catholics.[3] Schell's late elder sister, Maria Schell, was also an actress; as are their two other siblings, Carl and Immy (Immaculata) Schell. The Schell family moved to Zurich, Switzerland in 1938, where young Maximilian went on to serve in the Swiss Army, achieving the rank of corporal. He began acting at the Basel Theater.[4] 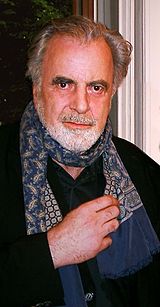 Schell made his Hollywood debut in 1958 in the World War II film The Young Lions. In 1959, he appeared as Hans Rolfe, the defense attorney, in a live Playhouse 90 television production of Judgment at Nuremberg. In 1961, he reprised the role on film, winning the Academy Award for Best Actor. 1974's The Pedestrian, which Schell wrote, produced, directed, and starred in, was nominated for Best Foreign Language Film.

Schell refused to be typecast. Although he was top billed in a number of Nazi-era themed films as The Man in the Glass Booth; Counterpoint (1968); A Bridge Too Far; Cross of Iron; The Odessa File; Julia; and Judgment at Nuremberg, he also played more diverse characters in Krakatoa, East of Java; The Black Hole; The Freshman; John Carpenter's Vampires; Topkapi; Stalin; Candles in the Dark; Erste Liebe; Deep Impact; and the television miniseries, Peter the Great (1986), which co-starred Vanessa Redgrave and Laurence Olivier.

Since the 1990s, Schell has appeared in many German language made-for-TV films, such as the 2003 film Alles Glück dieser Erde (All the Luck in the World) opposite Uschi Glas and in the television miniseries The Return of the Dancing Master (2004), which was based on Henning Mankell's novel.

In addition to his international film career, Schell has been active as director, writer and actor in European theatre, making his stage debut in 1952, three years before his first cinematic role. In 1972 he starred as 'Deeley' in Peter Hall's German language premiére of Harold Pinter's Old Times at the Burgtheater in Vienna.

In 1977 he directed Tales from the Vienna Woods at the National Theatre in London. In 2006 he appeared in Arthur Miller's Resurrection Blues directed by Robert Altman in London at the Old Vic.[5] Schell has also served as a writer, producer and director for a variety of films, including the documentary film Marlene (1984) with the participation of Marlene Dietrich that won several awards. In 2002, he released My Sister Maria, a documentary about his late sister Maria Schell.

In the mid 1960s, Schell reportedly was engaged to the fashion model Donyale Luna, though the wedding never happened. He married the Russian actress Natalya Andrejchenko, whom he met on the set of Peter the Great. They have one daughter, Nastassja Schell (b. 1989). He was also reported to have had an affair with Neile Adams McQueen, the wife of actor Steve McQueen[6]

In 2000, he collapsed and was diagnosed with pancreatitis related to his diabetes. At the time, he was starring on Broadway in the premiere of the stage version of Judgment at Nuremberg, changing roles from the defense lawyer to the lead judge on trial for crimes against humanity.[citation needed]

Schell is the godfather of actress Angelina Jolie, daughter of his The Odessa File co-star Jon Voight and Marcheline Bertrand.