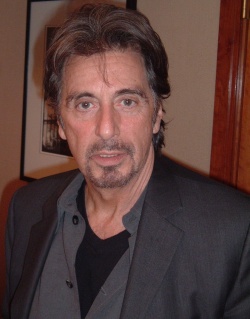 Alfredo James “Al” Pacino (born April 25, 1940) is an Academy-, BAFTA-, Golden Globe-, Emmy-, & Screen Actors Guild Award-Winning American stage and director, widely considered to be one of the greatest and most influential actors of all time. [ [http://imdb.com/name/nm0000199/ IMDB Biography] ]

In 1966, he studied under legendary acting coach (who portrayed the character in scenes with Pacino in the 1974 film ""). Pacino found acting to be enjoyable and realized he had a gift for it. However, it did put him in financial straits until the end of the decade, when he had won an for his work in "" and the Tony for Best Featured Actor in a Play for "Does the Tiger Wear a Necktie?". He made his first screen appearance in an episode of the television series "" in 1968, and his largely unnoticed movie debut in "" came the following year.

It was the 1971 film "", in which he played a addict, that would bring Pacino to the attention of director . Pacino's rise to fame subsequently came after portraying in Coppola's blockbuster 1972 film "" and in the eponymous 1973 movie. Although several established actors, including , , and a little-known also wanted to portray Michael Corleone, director Coppola selected the relatively unknown Pacino, much to the dismay of studio executives. Pacino's performance earned him an Academy Award nomination, and offered one of the finest examples of his early acting style, described by as "intense" and "tightly clenched".

In 1973, Pacino starred in the very popular "" and the less popular "Scarecrow" alongside , that won the Palme d'Or in Cannes. In 1974, he reprised his role as Michael Corleone in the successful sequel "", acclaimed as being comparable to the original. In 1975, he enjoyed further success with the release of "", based on the true story of a bank robber . In 1977, Pacino starred as a race-car driver in "", directed by Sydney Pollack, and received a "" nomination for Best Motion Picture Actorndash Drama for his portrayal of "", losing out to , who won for "".

During the 1970s, Pacino had four Oscar nominations for Best Actor for his performances in "Serpico", "The Godfather Part II", "Dog Day Afternoon", and "...And Justice for All". He continued his dedication to the stage, winning a second for "" and performing the title role in "Richard III" for a record run on Broadway, despite poor notices from critics.

Pacino's career slumped in the early 1980s, and his appearances in the controversial "Cruising" and the comedy-drama "Author! Author!" were critically panned. However, 1983's "Scarface", directed by , proved to be a career highlight and a defining role. Upon its initial release, the film was critically panned but did well at the box office, grossing over US$45 million domestically. [cite web|url=http://boxofficemojo.com/movies/?id=scarface.htm|title="Scarface" (1983) Box Office|work=boxofficemojo.com|accessdate=2007-12-25] Pacino earned a Golden Globe nomination for his role as a n drug dealer. Years later, he told interviewer that represented the best work of his career.Fact|date=May 2008

In 1985, Pacino worked on his most personal project, "", a 1969 play by the English writer . He starred in the play, remounting it with director David Wheeler and the Theater Company of Boston in a 50-minute film version. It was later released as part of the "Pacino: An Actor's Vision" box set in 2007.

1985's film "Revolution" was a commercial and critical failure, resulting in a four year hiatus from films, during which Pacino returned to the stage. He mounted workshop productions of "", "" and other plays; he appeared in "Julius Caesar" in 1988 in producer 's . Pacino remarked on his hiatus from film: "I remember back when everything was happening, '74, '75, doing "" on stage and reading that the reason I'd gone back to the stage was that my movie career was waning! That's been the kind of ethos, the way in which theater's perceived, unfortunately." [cite news|url=http://franklovece.com/subpage.html#pacino|title=Pacino re-focuses on film career; after five-year absence, actor returns to the big screen|publisher=Los Angeles Times|date=September 17, 1989|author=Frank Lovece] Pacino returned to film in 1989's "Sea of Love".

His greatest stage success of the decade was 's "American Buffalo," for which Pacino was nominated for a .

Pacino received an Oscar nomination for playing Big Boy Caprice in the box office hit "Dick Tracy" (1990), followed by a return to arguably his most famous character, , in "" (1990). In 1991, Pacino starred in "Frankie and Johnny" with Michelle Pfeiffer, who co-starred with Pacino in "Scarface". He would finally win an Oscar for Best Actor, for his portrayal of the depressed, irascible, and retired blind Frank Slade in 's "" (1992). That year, he was also nominated for the supporting actor award for "Glengarry Glen Ross", making Pacino the first male actor ever to receive two acting nominations for two different movies in the same year, and to win for the lead role (as did in 2004). Also in 1990, Pacino was offered to voice Batman villain Two-Face in the hugely successful "" but turned down the role.

During the 1990s, Pacino had acclaimed performances in such crime as "" (1993), "Donnie Brasco" (1997), the multi-Oscar nominated "The Insider" (1999) and "Insomnia" (2002). In 1995, Pacino starred in Michael Mann's "Heat", in which he and fellow film icon appeared onscreen together for the first time (though both Pacino and De Niro starred in "", they did not share any scenes. The pairing drew much attention as the two actors have long been compared). In 1996, Pacino starred in his theatrical feature "", and was lauded for his role as Satan in the drama "The Devil's Advocate" in 1997. Pacino also starred in 's critically acclaimed "" in 1999, playing the team coach.

Pacino has not received another nomination from the Academy since "", but has won two Golden Globes during the last decade, the first being the Award in 2001 for lifetime achievement in motion pictures, and the second for his role in the highly praised miniseries "Angels in America" in 2004.

Pacino has turned down several key roles in his career, including that of in "", in "", in "", in "", in "", Captain Willard in "", Richard Sherman in a never-filmed remake of "", and Edward Lewis in "". Fact|date=July 2008 In 1996, Pacino was slated to play General in a major biographical motion picture when director pulled the plug on production to focus on his movie "Nixon". Pacino's greatest stage successes of the decade were in revivals of 's "" and 's "".

Pacino turned down an offer to reprise his role as in ', ostensibly because his voice had changed dramatically since playing Michael in the first two "Godfather" films. As a result, was not permitted to use Pacino's likeness or voice in the game, although his character does appear in it. It is rumored Pacino actually declined the role due to a conflict with Electronic Arts' rival, Vivendi Universal, which launched a competing game adaptation of the remake of 1983's "Scarface", titled '. However, Pacino did not voice his character in this game for the same given reason. Pacino allowed his likeness to be used for the game, but not his voice. [cite news|url=http://ve3d.ign.com/articles/news/10397/Pacino-Lends-Likeness-Not-Voice-To-Scarface-Game|title=Pacino Lends Likeness, Not Voice, To Scarface Game|author=Robert Howarth|date=April 21, 2005]

Rising director worked with Pacino for "Insomnia", a remake of the Norwegian Film of the same name. The film and Pacino's performance were critically lauded and the film did moderately well at the box office. Pacino next starred as lawyer in the 2003 of 's play "". Pacino still acts on stage and has dabbled in film directing. His -screened "" has earned good notices. On the "", he is only the second actor to appear on both lists: on the "heroes list" as and on the "villains list" as . Pacino starred as Shylock in Michael Radford's 2004 film "The Merchant of Venice".

With his box office earnings relatively modest of late, Pacino looks to be gearing up with several new projects. He starred in ’s "" alongside , , , and as the villain Willy Bank, a casino tycoon who is targeted out of revenge by Danny Ocean and his crew. The film received generally favorable reviews.

"" was released on April 18, 2008 in the United States, having already been released in various other countries in 2007. The film was critically panned, although critics found the fault to be in the plot instead of Pacino's acting. [cite web|url=http://www.metacritic.com/film/titles/88minutes|title=88 Minutes|accessdate=2007-07-19] In "", Pacino's next scheduled film, Pacino and co-star as New York detectives searching for a serial killer. Rapper also stars in it as well as professional skateboarder . The film was released to theaters on September 12, 2008. Two promotional trailers have been released so far, as of March 2008. In "Rififi", a of the 1955 French original based on the novel by Auguste Le Breton, Pacino plays a career thief just out of prison who finds his wife has left him; in his anger, he starts planning a heist. [cite web|url=http://www.wippit.com/artists/Al_Pacino/index.html|title=Wippit Featured Artists: Al Pacino|work=wippit.com|accessdate=2007-12-25] Also Pacino is set to play in the film "Dali & I: The Surreal Story". [cite news|url=http://www.empireonline.com/news/story.asp?NID=20265|title=Pacino to play Dalí|publisher=Empire.com|date=19 January 2007] [cite news|url=http://www.hollywoodreporter.com/hr/content_display/film/news/e3i34f42e1d7ddfde742e9a080606b2cccf|title=Surreal life: Pacino plays Dali in biopic|publisher=The Hollywood Reporter|date=January 19, 2007|author=Borys Kit] Pacino also won several awards during this time including one for being named the greatest actor of all time in Channel 4's poll of the greatest actors.

On January 7, 1961, Pacino and two others were seen by police circling in their vehicle in a suspicious manner, and wearing black masks and gloves. When police pulled them over, Pacino was found to be carrying a concealed weapon and was arrested. Pacino, who was 21 years old and living in New York City, stayed in the Rhode Island ACI for three days before being released when it was found that the weapons were, in fact, props from a movie set. [ [http://www.vinylzart.com/cart.php?target=product&product_id=3323&category_id=22 The shop is closed ] ] [http://www.mugshots.org/hollywood/al-pacino.html]