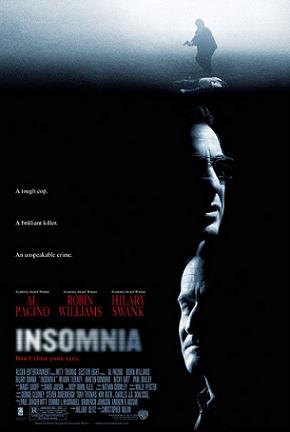 In the small fishing town of , a local 17-year-old girl named Kay Connell () is found murdered. Two LAPD detectives, Will Dormer () and Hap Eckhart () are sent up to assist the local police with their investigation.

Concurrently, an intense Internal Affairs investigation back in Los Angeles is about to put Dormer under the microscope. Dormer is, in fact, guilty of planting false evidence against at least one suspect in this earlier case, a man named Dobbs. Certain that Dobbs was responsible for kidnapping and murdering a young boy, but realizing that there was not enough evidence to support a conviction, Dormer planted in Dobbs' apartment. Dormer fears that many of his legitimate convictions will be overturned if discovers that he falsified evidence in the Dobbs' case. He does not want his life's work destroyed, nor does he want these criminals back on the streets. Early in the movie, Dormer's partner, Eckhart, reveals that Internal Affairs has offered him an immunity deal in exchange for his testimony. Dormer tries to talk Eckhart out of it, but Eckhart, apparently complicit to some degree in Dormer's misdeeds, says that ultimately he must look out for himself and his family first, so he feels he has no choice but to accept the deal.

Focusing now on the Nightmute case, Dormer comes up with a clever plan to lure the murderer back to the scene of the crime. However, the stakeout attempt is blown, and the murder suspect flees into the fog, forcing the police to spread out and search for him on foot. During the pursuit, Dormer sees a figure through the fog, which he believes to be the armed murder suspect. He fires, and the figure collapses. However, when Dormer approaches, he discovers that he has mistakenly shot Eckhart. When Dormer realizes what he's done and tries to help, Eckhart turns away in horror, believing that Dormer shot him to prevent him from testifying in the Internal Affairs investigation. Eckhart dies moments later. As none of the other officers witnessed Eckhart's shooting, it is initially assumed that he was shot by the fleeing murder suspect.

Given the nature of Eckhart's impending testimony, Dormer knows that Internal Affairs will never believe that the shooting was accidental. Thus, Dormer faces the dilemma of trying to bring the murder suspect to justice while at the same time cover up the truth about Eckhart's shooting and preserve the misconception that the murder suspect was responsible for that as well. Ellie Burr (Swank), a young police officer and Dormer's biggest fan, is put in charge of the investigation into Eckhart's shooting.

Throughout the film, Dormer becomes more and more unhinged, partly because of feelings of guilt over shooting his partner and anxiety about the risk of being found out, partly because of brought on by the perpetual daylight of the Alaskan summer. Adding to his delirium are the phone calls he receives from Kay's killer, who does not identify himself, but who saw Dormer shoot Eckhart and knows about his attempt to cover it up. Dormer is aware that Kay was a fan of a crime writer named Walter Finch (Williams), and books autographed by him were found among her possessions. He discovers that Finch lives in Alaska, not far from the crime scene, and so starts to suspect Finch is the killer. He finds Finch's address and enters his apartment illegally. There, he finds his photo. Finch returns to his apartment while Dormer is there, realises Dormer has identified him, and flees. Dormer goes in pursuit, but Finch escapes.

Finch contacts Dormer again, and they arrange to meet. Finch offers Dormer a deal, where Dormer is supposed to help frame Kay's abusive boyfriend Randy Stetz () for the murder in exchange for Finch's silence about the Eckhart shooting. Finch secretly tape records their conversation, in order to give him hard evidence of Dormer's role in the shooting, as well as Dormer's attempt to cover it up. He then lets Dormer know he taped the conversation, a move designed to ensure Dormer's silence.

Dormer seemingly agrees to the plan, though he's really just stalling for time. Unfortunately, Finch is impatient and manages to frame Randy all by himself. When Randy is arrested for murder, Dormer is forced to choose between destroying his own reputation and allowing an innocent man to be sent to prison.

Meanwhile, Burr finds some inconsistencies in the Eckhart shooting: she finds a 9mm shell casing at the scene. Reading a case report on one of Dormer's old cases, she learns that Dormer carries a backup gun, a 9mm Walther, now leading her to suspect that Dormer shot his own partner. Later, while meeting with Finch at his cabin, Burr discovers the murder victim's dress. Realizing that Finch is the murderer, she reaches for her gun, but Finch knocks her unconscious. Dormer races to the cabin to confront Finch. It is clear that his concentration is nearly gone due to his lack of sleep. A brief fight ensues between Dormer and Finch, before Burr arrives and Finch escapes to his shed.

Burr holds Dormer at gunpoint, revealing that she knows he shot Eckhart and demands to know whether he did it on purpose. Dormer breaks down, admitting that he shot his partner and stating that he is no longer certain whether it was an accident or not. From the protection of his shed, Finch fires at them with his shotgun. While Burr and Finch trade gunshots, Dormer sneaks around to Finch's location. In a twist of irony, Finch (fatally) shoots Dormer with Dormer's original weapon (which was taken from Dormer to investigate Eckhart's death), but Dormer quickly picks up the shotgun and blasts Finch at point blank in the stomach. A stunned Finch dies and tumbles into the water.

Burr rushes to the detective's aid. She comforts Dormer by affirming that Eckhart's shooting was accidental, and tries to toss the evidence — the 9mm shell casing — found from the scene. Dormer stops Burr, telling her not to lose her way. "Let me sleep," he asks, weakly, before finally dying. After a moment of contemplation, Burr slips the shell casing back into its plastic evidence bag.

Although the remake echoes much of the substance of the original, it also significantly alters both the plot and the nature of the protagonist; Pacino's character is more sympathetic and more capable of redemption than 's in the original film.

Critics' reviews were very positive, with a "fresh" rating of 92 percent on .

Robert Westbrook adapted the screenplay to novel form, which was published by in . [cite book|first= Robert|last= Westbrook|title= Insomnia|isbn= 9780451410498|publisher= Onyx]