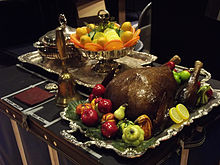 Props set the mood for the musical number "Food, Glorious Food" in the musical production, "Oliver"

A theatrical property, commonly referred to as a prop, is an object used on stage by actors to further the plot or story line of a theatrical production. Smaller props are referred to as "hand props". Larger props may also be set decoration, such as a chair or table. The difference between a set decoration and a prop is use. If the item is not touched by a performer for any reason it is simply a set decoration. If it is touched by the actor in accordance to script requirements or as deemed by the director, it is a prop.

Small acting troupes formed during the renaissance, travelled throughout Europe. These "companies," functioning as cooperatives, pooled resources and divided any income. Many performers provided their own costumes, but special items: stage weapons, furniture or other hand-held devices were considered "company property," thus the term "property," which eventually was shortened to "prop."[1][2] The first known props were stylized hand held masks, called Onkoi, used by performers in "Greek Theatre" and have become symbols of theatre today, known as the "comedy and tragedy masks". 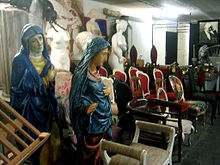 The term "theatrical property" originated to describe an object used in a stage play and similar entertainments to further the action. Technically, a prop is any object that gives the scenery, actors, or performance space specific period, place, or character. The term comes from live-performance practice, especially theatrical methods, but its modern use extends beyond the traditional plays and musical, circus, novelty, comedy, and even public-speaking performances, to film, television, and electronic media.

Props in a production originate from off stage unless they have been preset on the stage before the production begins. Props are stored on a prop table backstage near the actor's entrance during production then generally locked in a storage area between performances. The person in charge of handling the props is generally called the props "master/mistress" however, varying positions also include coordinators, production assistance and interns as may be needed for a specific project.

The term has readily transferred to television and motion picture production, where they are commonly referred to by the phrase movie prop or film prop. In recent years, the increasing popularity of movie memorabilia (a broader term that also includes costumes) has added new meaning to the term "prop," broadening its existence to include a valuable after-life as a prized collector's item. Typically not available until after a film's premiere, movie props appearing on-screen are christened "screen-used", and can fetch thousands of dollars in online auctions and charity benefits.[3][4]

Many props are ordinary objects. However, a prop must "read well" from the house or on-screen, meaning it must look real to the audience. Many real objects are poorly adapted to the task of looking like themselves to an audience, due to their size, durability, or color under bright lights, so some props are specially designed to look more like the actual item than the real object would look. In some cases, a prop is designed to behave differently than the real object would, often for the sake of safety.

Examples of special props are:

Working in coordination with the set designer, costume designer, lighting and sometimes, sound designer, this overlapping position has only in recent years become of greater importance. Props have become more and more specialized due in large part to realism as well as the rise of theatre in the round, where few sets are used and the simple prop becomes as important a design element as costumes and lighting.

Besides the obvious artistic creations made in the prop workshop, much of the work done by the property designer is research, phone searches, and general footwork in finding needed items.

Of all the positions within theatre and film, the property designer may well receive the least accolades. There are no awards for props and credit may sometimes not be listed.